Action Figure Review: Andra from Masterverse/ Masters of the Universe: Revelation by Mattel 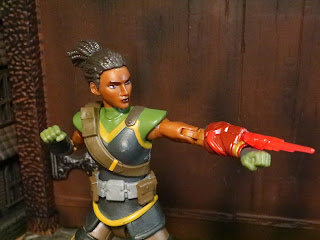 This mini marathon of Masterverse figures isn't so mini anymore now that we're moving into series 3! That's right, kids, ol' St. Nick came a little early and delivered your boy Barbecue17 some new MOTU toys right before Christmas. Series 3 is a pretty exciting set and I thought I'd kick things off with a look at Andra, a character who has never before been released in toy form. If there's a part of MOTU lore I'm most unfamiliar with it's the Marvel/ Star Comics stories which is actually where Andra first appeared (issue #9). She also was mentioned in the Masters of the Universe Classics bios and appeared in the modern DC comics briefly as well but at this point MOTU: Revelation is clearly her biggest role in the franchise. Andra's a little different in Revelation (the character was originally Caucasian with short blonde hair) but there is a lot of stuff that is also in line with the previous depiction of the character such as her being a friend of Teela's who joins up with Randor's forces and is quickly promoted. I liked Andra in Revelation and I'm really glad that Mattel got her into the line so soon. It's always fun to get a brand new character! Let's take a look at Andra after the break... 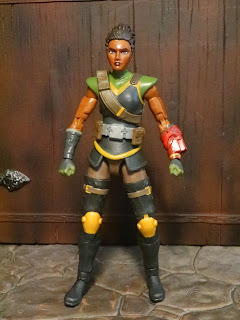 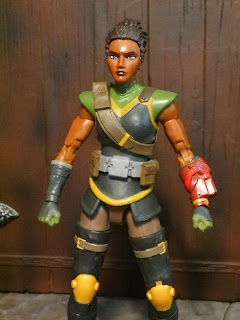 The Positives:
* When we meet Andra in MOTU: Revelation she is a traveling mercenary , like Teela, and thus she's wearing a similar outfit. Different colors, though. I love the combination of green, black, and brown with yellow highlights. It looks fantastic and gives her a rather unique color scheme for MOTU. This looks like the kind of outfit you might see a Rogue or something similar wear in Dungeons and Dragons with the exception of a few pieces of visible technology on her belt and on her left gauntlet. The sculpt is really sharp and the paint applications are neat, clean, and stand out nicely. 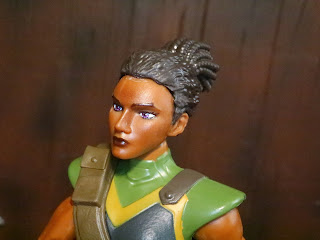 * The portrait is excellent. Andra has a great face sculpt, incredibly neatly printed eyes, and fantastic hair. There's definitely a nice amount of detail in her braids. 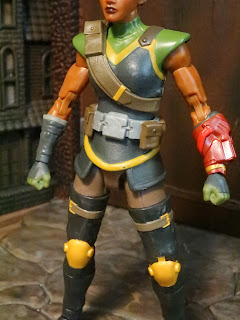 * While it's not removable Andra's belt is a separate piece. Her shoulder harness is, too, but it's permanently attached in place. Her boots are thigh high leather boots with buckles and armored knee pads. 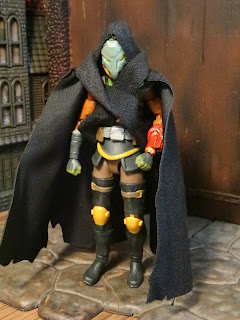 * When we're first introduced to Teela and Andra in episode 2 of Revelation they're both wearing cloaks and armored helmets. To recreate that look Mattel has included an alternate portrait and a very nice soft goods cloak. The cloak has a functioning hood and two fabric straps that wrap around Andra's arms or torso. There's a bit of Velcro on one of them to help you keep the cloak in place. It's a nice soft goods accessory and works really well. 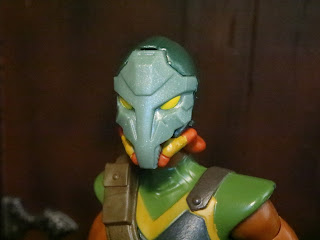 * And here's the helmet! It's really cool with glowing yellow eyes and a tube that runs from the mouth to the back of the head. It's a separate portrait that you swap out easily and it looks fantastic. I just wish Teela had included one, too. 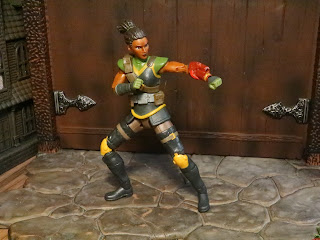 * Overall I really like the articulation on the figures in this series. It's probably one of the best lines in terms of the quality of the figure builds and articulation scheme that Mattel has put out. Andra moves nicely and has plenty of useful joints with a great range of motion. 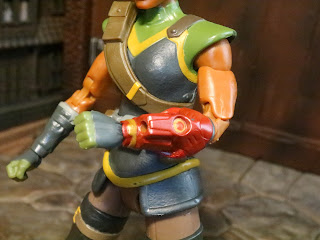 * On her right forearm Andra is sporting a laser weapon. It kind of reminds me of one of those roleplay items for kids that comes out for every superhero movie but it's actually really cool here. It's a laser blaster of sorts and it's nicely sculpted and painted. 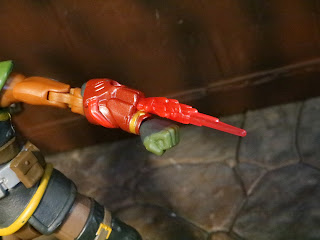 * There's even a laser blast effect that plugs into the barrel! How neat is that? 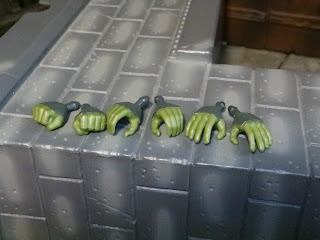 * Andra comes with six interchangeable hands that swap out easily. She has a pair of fists, a pair of grips, and a pair of open palms. It's a nice assortment and between these and her alternate head and the cloak you'll have plenty of ways to display her. 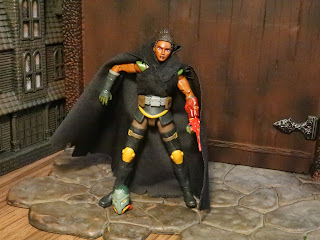 Wow! Andra really surprised me as she's probably one of the best Masterverse figures released yet. Besides her fantastic outfit and her cool wrist mounted laser blaster you also get a blast effect, six hands, and the cloak and helmet to give her a completely different appearance. Mattel really put a lot of effort into Andra and even with the recent price increase for this line she still feels like she's worth the price. Andra gets an Epic from me. She wasn't one of my favorite characters from Revelation or anything but, dang, her figure rocks. Nice job, Mattel!