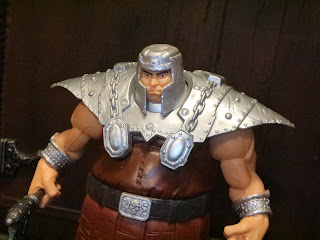 Are you ready to take a look at another toy or collectible based on another of the 1983 additions to the Masters of the Universe line for Masters of the Universe Month 2021? Today we're checking out Ram Man, the Heroic Human Battering Ram who came in like a wrecking ball to devastate the Evil Warriors! Ram Man was released in the second series of figures from 2002 in Mattel's "200x" Masters of the Universe line which made perfect sense as he was one of the main heroes in the Mike Young Productions animated series. I never had a vintage Ram Man as a kid (I now own at least three) and I didn't end up getting this one until the mid 2000s. I actually started collecting the 200x line after it was out of stores but before Masters of the Universe Classics was in full swing, so this was my first Ram Man. I love the 200x line and how it melds the playability and action features of a traditional kid focused toyline with the focus on detailed sculpting that was popular among collector focused lines of the late 1990s and early 2000s. The Four Horsemen worked magic with this line, too, and Ram Man is a big improvement over the vintage toy. Let's check him out after the break... 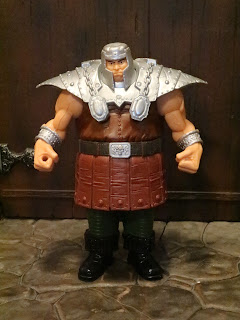 The Positives:
* Ram Man just flat out looks awesome. He's bulky, muscular, and absolutely covered in some fantastic armor. His shoulder armor is brilliantly sculpted with lots of rivets and chains and even some bits of damage as well. His tunic looks like it's made of leather with leather strips hanging down from his waist and a really cool belt buckle with a skull on it. The paint work is excellent and every part of the figure is covered with solid detail. Most of this line used unique sculpts for each figure and it shows. The Four Horsemen went all out here! 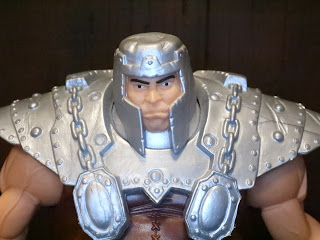 * There's a lot of character in Ram Man's face! I like the expression he's making. He seems like he's finding something a bit questionable but also like he might just be getting a bit pissed off and he's ready to start ramming some of the Evil Warriors. I love the design of his helmet and it's nice that could can swivel his head, showing off the helmet as a separate piece. 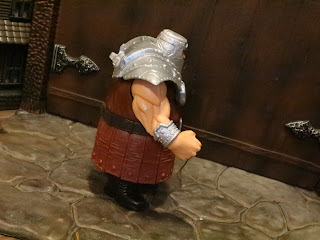 * Mattel did incorporate action features into this line meaning that Ram Man can use his head as a battering ram. Push his body down over his legs and push the button on his heel (the vintage toy's button was on the right heel but this one has the button on the left heel) and Ram Man's torso pops up. It's silly but fun and it works really well. 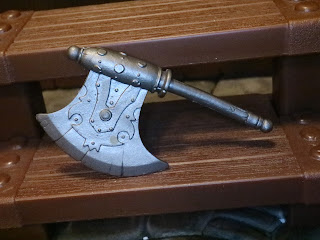 * Check out that axe? Ram Man's one handed bearded axe has some really cool detail on the blade and the handle. The accessories in this line are quite good and are almost always very, very detailed. 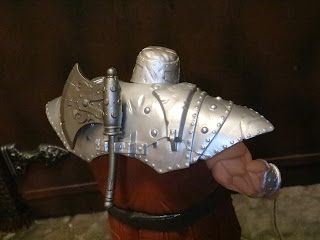 * When Ram Man just wants to stick to ramming and not chopping he can stow his axe away on the back of his armor. There's a small, durable clip there that holds it on like a charm. 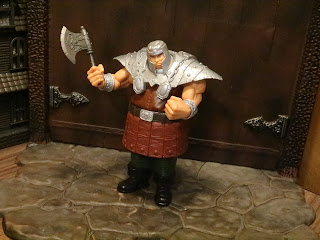 * Ram Man is a solid figure with more articulation than the vintage figure. He's not as articulated as the other figures being that he's kind of built around an action feature, but he's still very fun to mess around with.
The Negatives:
* Ram Man is about the same size as every other figure in the line which is odd since he's standing straight up and they're crouching. The MYP Ram Man is huge so it's evident Mattel shrunk him down to get him to fit in the same package as everyone else. 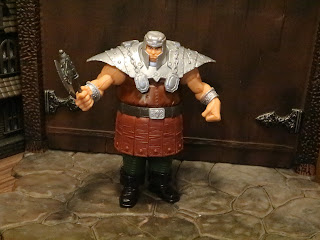 When compared to the other figures in the 200x line Ram Man doesn't seem like a massive juggernaut of a man but when you take him on his own he looks huge and powerful. He's a nice update of the vintage toy for sure with a lot of the same charm but plenty of welcome upgrades. I love Ram Man and while he's not one of the best 200x Masters of the Universe figures he's still Great. In 2003 Mattel released this figure again with a slightly different paint scheme (brighter colors and bronze shoulder armor) so maybe I'll revisit this version of Ram Man again some day...