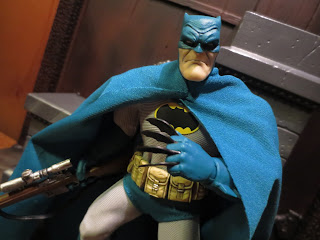 Yeah, I'm about a year late but I finally decided to pick up a One:12 Collective action figure from Mezco. Over the past few months me and the Reel Brad Bell have been talking about the influx of "high end" 1/12th scale action figures in the market lately and it got me interested in looking into One:12 Collective more closely. If you're not familiar with the concept behind the line, these are high end 1/12th scale action figures with alternate hands and portraits, an abundance of accessories, extremely well thought out articulation, and actual cloth outfits. Think of more modern Megos or smaller scaled Hot Toys. While the One:12 Collective branding now covers a diverse array of properties including Marvel Comics, Star Trek, Universal Monsters, Judge Dredd, and even Hanna-Barbera, the first figure released in the line was Batman from Frank Miller's classic The Dark Knight Returns. Mezco released a few different costume variations but I've decided on the PX Previews Exclusive that's a modified version of the classic silver age Batsuit. It's the first outfit Bruce wears in the book and is on of my favorites. I found a heck of a deal on this and probably paid a bit less than I would have originally factoring in shipping. Ready for a closer look at an incredible action figure from last year? Then join me after the break... 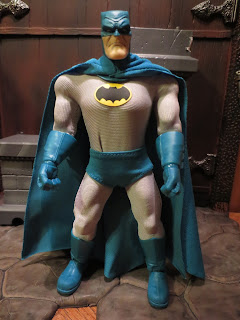 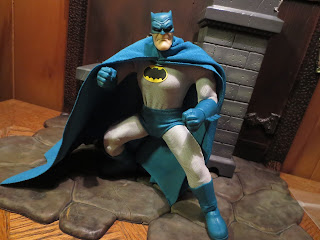 * First and foremost, the articulation on this figure is incredible. I may not have been able to accurately describe all of it above since it's almost all hidden by Batman's suit but it works. This figure doesn't feel at all fragile, brittle, or rubbery. It's solid, durable, and truly amazing. Seriously, it's one of the most amazing action figures I've ever had my hands on. 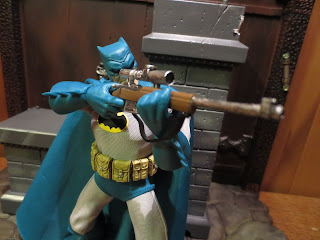 * Seriously, the range of subtle motions you can get with this figure is just unheard of. I mean, this Batman holds his rifle more realistically than characters whom you would actually expect to hold a gun. And putting him in this pose? It was nearly effortlessly. Something about this body's articulation model just flows perfectly. 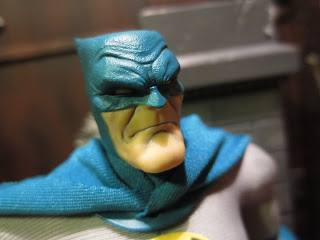 * Check out that headsculpt! Oh my gosh does this version of Bruce look pissed! I love it! It just seems to really capture the tone of Miller's Batman. I love that frown on Bruce's mug. Could he be angrier? 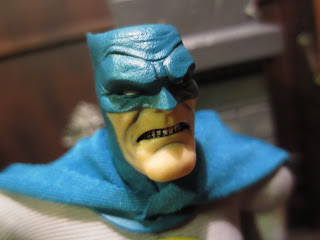 * The second portrait is even better as this time Batman looks really pissed. Like "the Joker killed Robin, kicked Ace the Bathound, and told Alfred his recipe for Lobster Risotto was second-rate" pissed. This is an amazing work and the sculpt and paint just blend so perfectly to capture Frank Miller's iconic rendition of the Dark Knight. The head swaps really easily, too, with no fear of breakage. 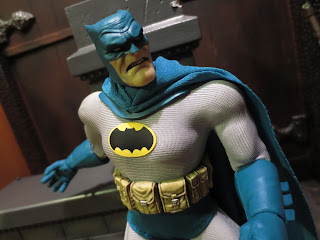 * The figure perfectly captures the larger, less chiseled but more brutish look of the aged Bruce Wayne. This is just the best that this version of Batman has ever looked outside of the pages of a comic. 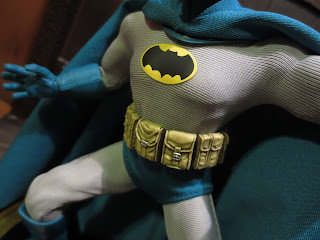 * Check out how the material looks over the muscular body underneath. It looks so natural and just seems like such a perfect fit for a superhero action figure. I love how you can realistically see the muscles of this massive Batman bulging underneath his costume. It just looks perfect. 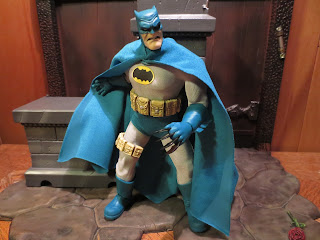 * I'm almost always a fan of an actual cloth cape over a molded plastic cape and, my word, this cape is amazing. The material is excellent and the cape just drapes over Batman's shoulders perfectly. It turns out that Mezco has affixed some rubber pieces to the cape that help it to drape and hang naturally by adding weight and creases in the right places. Mezco has truly pulled out all the stops in engineering one of the greatest true action figures of all time. The way the cape is designed is just brilliant. 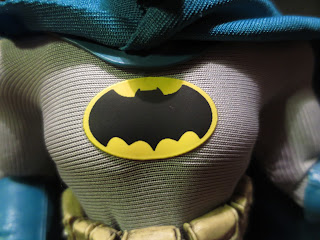 * The batsymbol looks awesome. This is the silver age styled batysombol that's been transformed into something larger and more hulking than the Batman of the past. I love those early scenes from the book and was dying to own this version of Bats so I'm glad I manged to find him. What's cool about this symbol is that it's actually a rubbery piece attached to the costume. It looks great and seems like it would definitely be more heavily armored than everything around it. 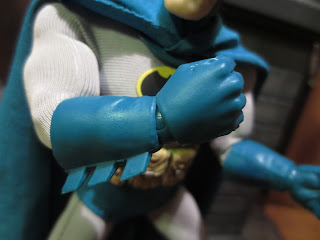 * If you've read any of my dozens of other Batman reviews you'll probably remember that I always talk about how the blades on Batman's gauntlets turned out. Usually they get bent out of shape. Not these ones, though: These are solid. Heck, they even feel a bit sharp but not at all fragile or brittle. I love the quality of the plastic Mezco uses on the main figure itself. It just feels so sturdy and of the highest quality. 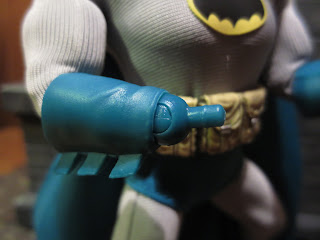 * The hands easily come off at the wrist so that you can swap them out. The pegs feel insanely sturdy. These might be the best swappable hands I've ever encountered in an action figure. 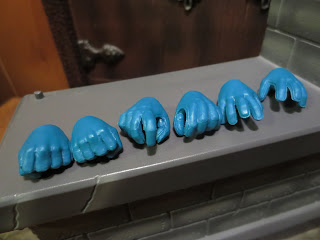 * The figure comes with four pairs of hands to give Bruce a variety of options for thrashing the bad guys. He's got a standard set of fists, a right handed pistol grip, a left handed rifle grip, and a pair of open hands with the figures somewhat splayed as if he's flying through the air or getting ready to grapple with some unlucky lowlife. They all look great, swap easily, and make playing with this figure way more fun. 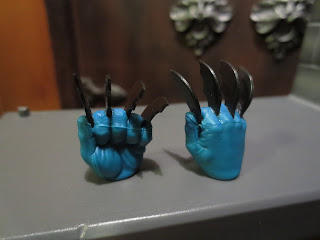 * The fourth pair of hands are my favorite, though: They're fists each gripping four small, sharp batarangs. The not only look amazing but they actually feel sharp. Whether you pose Batman preparing to a volley of these at his enemy or using them like claws, these are impressive extras. 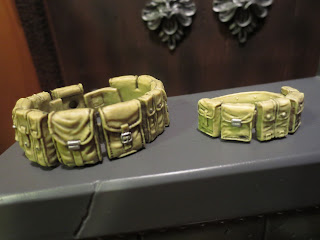 * Not only does Batman come with that awesome utility belt (one of the coolest looking utility belts I've ever seen) but he comes with this smaller utility belt that fits around his thigh. They're easy to fit on the figure, stay on tight, and just look incredible. 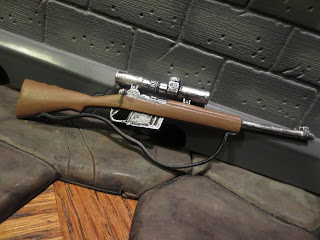 * Batman comes with the rifle he uses early on to stop the recently "cured" Two-Face's plot. This is such a well sculpted and painted accessory and it fits perfectly in Batman's hands. 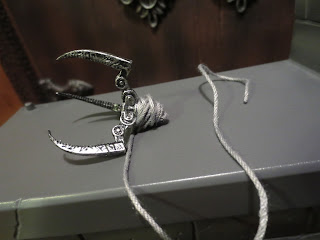 * If your Batman needs a way to get around, why not this cool grappling hook? It's definitely not functional but it looks in various poses in Bruce's hands. The paint is really nice on the hook and the cord is actually a real string. Pretty nice, really. 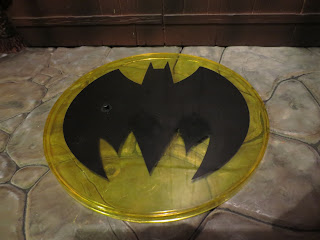 *Not that he needs it but Batman comes with a really cool translucent display base shaped like the batsymbol. This looks awesome on the shelf and features a foot peg for Bruce's right foot. It's nice to have a stylish way to display the Dark Knight, don't you agree? 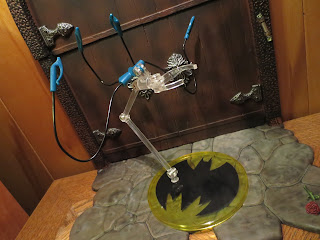 * If a standard stand isn't enough for you, check out this monstrosity! It's actually a two piece action stand that not only lets you pose Batman in mid-air but you can also use the wires to pose his cape. How crazy is that? The foot peg pops out and the arm pops right in to offer multiple points of off the ground posing possibilities. 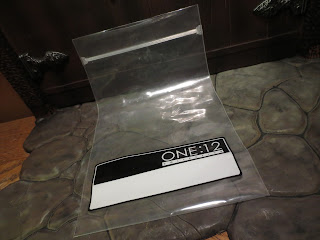 * It might not be a big deal but it's pretty cool that Mezco includes a labeled plastic bag to store the accessories in. I like this since it gets annoying to keep opening and closing the box to pull out more accessories so this offers a neat way to keep your extra hands and such close at....hand. 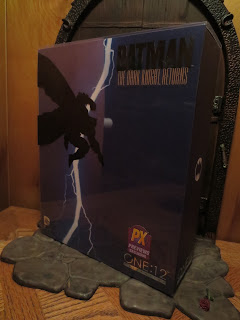 * I rarely talk about the package that a toy comes so when I do you know it's something special. This box is not only really well designed but it's also completely collector friendly. No tape needs to be cut at all top open this up, remove every piece of the figure, and put it back in for storage. The box is a very solid and sturdy five panel decorated with the cover imagery from The Dark Knight Returns. The Batman on the front, along with all of the print, are part of a clear plastic slipcover that slides over the box. You could use the front as a backdrop if you wanted too. Everything stores inside a series of sturdy vacuformed trays with slots for everything. 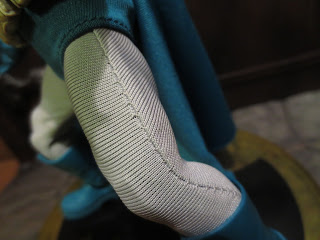 * I've had this figure for over a week now as of the writing of this review and the only thing I can think to point out as possibly a negative is that the seams on the costume can be a bit large. They're not that noticeable and I'm not sure they bother me at all but I'm sure they'll stand out to collectors more accustomed with 1/6th scale collectibles with smaller stitching. 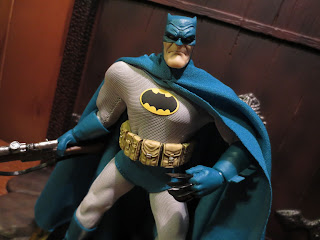 I'm just going to throw out right now that this is an Epic figure. You might be wondering if, when you pay the money and get this guy in hand, Batman really feels like a $70 dollar action figure. I think the answer is absolutely. I really can't say I've ever played with an action figure that just seemed this well thought out. Every joint, every piece of the uniform, and every accessory just seems to be well thought out and crafted from the right materials. There just doesn't feel like there were any shortcuts taken here. Considering that the price of action figures continues to rise, I'm starting to really appreciate quality over quantity more and more and here, with One:12 Collective, Mezco delivers just that.

When I say that this might be the finest Batman figure ever made under 7 inches, I'm not saying that as someone unacquainted with Batman action figures. Here's just a small sample of the Batman figures I've reviewed on this site alone:

Young Justice: Invasion by Mattel
Batman
Posted by Barbecue17 at 7/23/2016