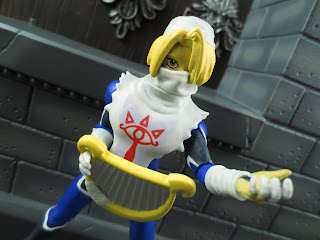 If you're keeping track of these, this is actually my fourth review from wave 1-5 of Jakks Pacific's World of Nintendo series. While we've gotten quite a few repaints and variants in this line, Jakks also always seems to get us a couple of new characters in each series. 1-5 has been pretty solid because we've received Bowser Jr., Waluigi, and now Sheik! Appearing in 1998's Nintendo 64 masterpiece The Legend of Zelda: Ocarina of Time, Sheik is really Princess Zelda in disguise as a harp playing ninja mystic. Sheik was definitely the cool, mysterious character in that game and it's awesome that Jakks is offering her to us to go along with last year's Link from the same game. Of course, you could also have her team up with the Iron Shiek and go on wacky adventures together. Actually, that sounds like a flippin' sweet idea. Mattel's going to release a new Iron Shiek soon, right? BTW, notice that Iron Shiek and Sheik spell their names differently. bizarre huh? Ready for a closer look at the actual Sheik figure instead of more pointless rambling? Then join me after the break... 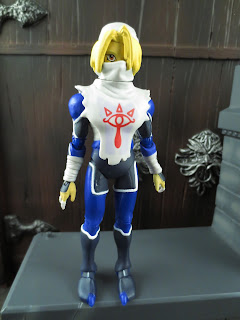 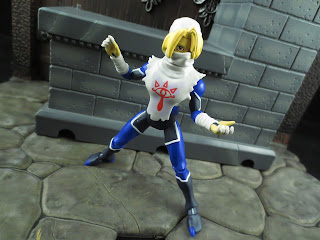 * Sheik isn't the best articulated figure ever but her range of motion isn't bad for this line. Actually, she has much nicer articulation that the OOT Link figure. Articulation junkies will probably be disappointed with her but anyone just wanting to display Sheik should have plenty of fun putting her in some great, expressive poses. 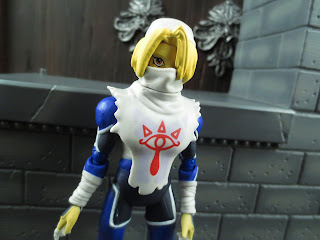 * Sheik is nice and colorful with clean paintwork all around. I love how eye catching the mysterious symbol on her tunic is! The blue and black bodysuit pops out, too, which really makes Sheik a very visually interesting character. The headsculpt is solid work for this line and lends her a nice air of mystery. 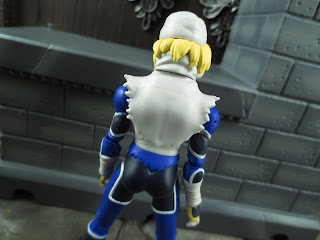 * Sheik's cloth tunic is actually a separately molded piece that rests over her body. (Underneath are some very tightly wrapped strips of cloth, perhaps part of Princess Zelda's method for disguising herself. Either that or magic.) The tunic does sit nicely over the body. I like the frayed edges sculpted around the sides. * To help teach you such hits as "Minuet of Forest," "Prelude of Light," and of course the ever popular "Nocturne of Shadows," Sheik comes with her harp. It's not a complex accessory but it does work nicely with the character. The paint apps are nice and clean on it, though, so that's a plus. It sure makes me wish that Link had come with his Ocarina, though. 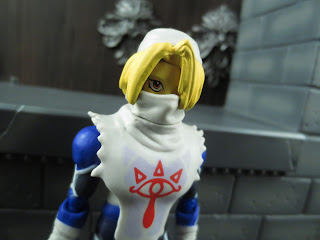 
* I really am not a fan of how Jakks designed Sheik's head. The head looks fine itself but it's kind of an awkward ball joint. Surely there was a better way to design this, right? 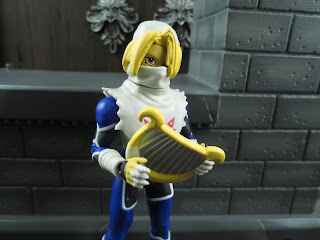 It's pretty cool that it's been...my gosh, 18 years since the Legend of Zelda: Ocarina of Time was released but you can still go into a store and by a Sheik action figure. (By the way, check out this old website with some cool pics of old Zelda toys!) Well, you can go into stores and buy her in theory, anyways: World of Nintendo figures can often be tricky to track down. I picked mine up from Amazon when she was in stock through them briefly. I'm disappointed that Jakks didn't have anything new to show us at Toy Fair (although they did announce the next two waves at SDCC last year) but Sheik is a nice figure to tide you over until we get some more news. She gets a Good and a 1/2 rating from me and is sure to excite fans of Legend of Zelda merchandise. There's not a ton of stuff released so it's cool to see the series get some more mainstream love!

This is the first Sheik figure I've reviewed on here, although I did review a Princess Zelda figure from 1998. I've reviewed plenty of other World of Nintendo figures, including: