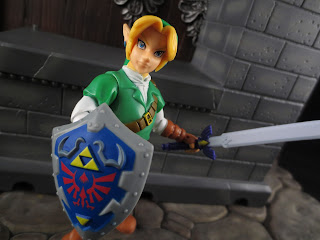 I absolutely love The Legend of Zelda: The Ocarina of Time. Love it, love it, love it. I've written about the game before and now, just thinking about it, I'm really wanting to play it again. I've been a big fan of Jakks Pacific's World of Nintendo toyline over the past year and I've been looking forward to this Ocarina of Time inspired version of Link. I'm going to come right out and say that I find this figure very disappointing, however. Jakks has a great line here but they really are hit and miss on their articulation. I'm OK with a minimally articulated figure like the Goomba or some repaints every now and then if the newly constructed figures are well thought out but Link here just isn't. What's crazy is that 2014's Skyward Sword Link is actually more well thought out than this newer version. Jakks seems to be having some struggles with this line (Wal-Mart doesn't carry it and Jakks claims that the 6 inch figures have been dropped due to a lack of retailer interest) and they really need to bring their A-game if we're going to get another year of figures. Anyways, rant over. On to a review of Link.... 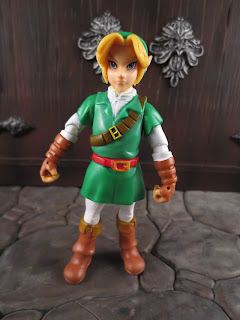 Accessories: Master Sword, Hylian Shield, scabbard, and a cardboard box with the Hylian Crest on it. 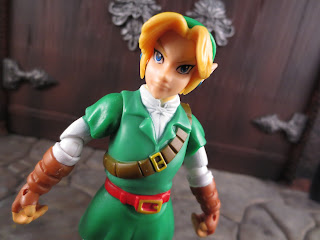 * I like the sculpt on this figure. At first I felt it was a bit off but after looking at it I realized that Jakks did try to match the art of the Ocarina of Time, meaning this Link actually looks stylistically different than the Skyward Sword version. This is clearly the older Link from the game so he's decked out in the regular tunic with tights, a belt, and the harness for his sheathe. 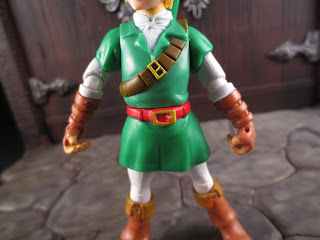 * There are a few places with a little slop but overall Link is really nice and clean. There a good amount of detail here it nicely matches the in game character. 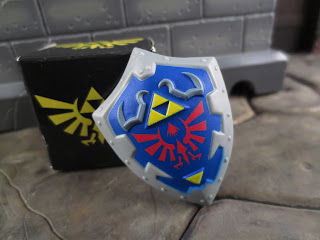 * Link's secret accessory is..... the Hylian Shield! I wish the shield had just come with the figure and that an Ocarina (or Navi) had been the secret bonus item. The shield's cool, though, but it is a bit of a paint to get on. 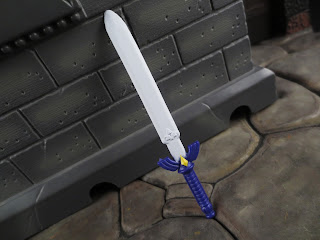 * Like the figure itself and shield, at first the sword looked a bit toyish to my eyes but again, after careful examination, I realized the colors here really match the in-game model. This is a pretty nice replica of the Master Sword as seen in Ocarina of Time. There's even a little Triforce relief on the blade. 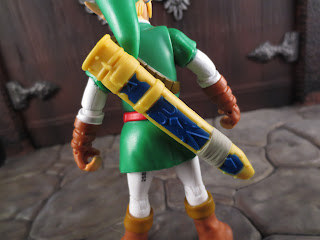 * I like Link's sheathe. It looks pretty good (once again, the colors are pretty close to what you actually see in the game) and the Master Sword fits nicely in it. Again, I really wish this guy had come with an ocarina too, though. 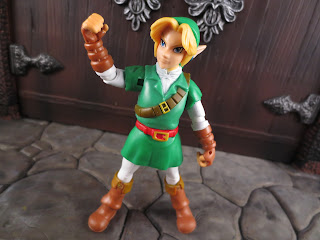 * The articulation on this figure is just bizarre. Technically almost everything you could expect in a figure of this size is there but it all either feels very gangly and loose or it's rendered useless thanks to odd placements. The worst thing is that links legs are pretty much immobile at the hips thanks to his tunic. There's a clever cut in the left side of the tunic but without a cut on the right side too, what's the point? 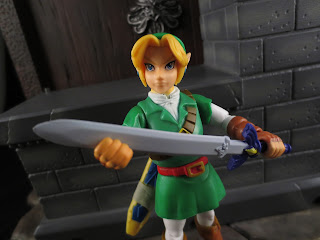 Link's not an awful figure or anything but I really feel that the articulation is incredibly flawed. Considering that Jakks did a nice job on 2014's Skyward Sword Link, it's even more disappointing that they missed this figure up. His accessory complement could be a bit more inspired, too. Seriously, the absence of the titular Ocarina of Time is a big deal in my eyes. This figure gets an Eh and a 1/2 from me. Unless you're a Legend of Zelda nut or a completest on this line, don't bother.


I've reviewed two other Link figures: Link
from an older Nintendo action figure set that served as a pre-order bonus for the Ocarina of Time on Nintendo 64 and the Skyward Sword Link from World of Nintendo.

I've reviewed plenty of other World of Nintendo figures, too, including: