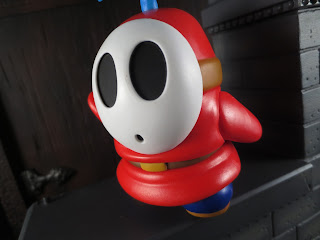 I haven't reviewed every one of wave 1-4 of Jakks Pacific's World of Nintendo line yet but so far I have to say this wave has been a bit of a disappointment. Fire Luigi is a good repaint but Gravity Suit Samus is kind of dull and Ocarina of Time Link is a less than average figure. I'll be looking at Tanooki Suit Mario tomorrow though, which in the meantime leaves me with reviewing the Shy Guy. I've always loved these little guys as far back as their first appearance in Super Mario Bros. 2. Their look is quite simple and yet it still really sticks with you. Now let me just be up front that I absolutely realize the scale in this line is kind of bizarre and the Shy Guy is much larger than you'd imagine. I really think that's just going to be the nature of the beast in a line with so many different characters from different properties in it and I've come to accept it. Actually, I've come to like it. While the Shy Guy and the Goomba are definitely oversized, they also look awesome on display and alongside the colorful Nintendo cast. Ready for a closer look at this new addition to the villains? Then join me after the break... 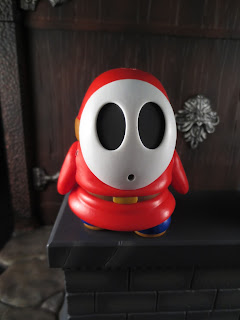 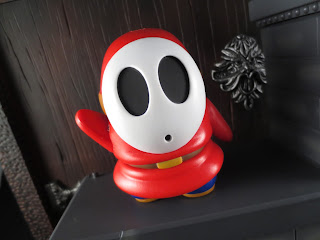 The Positives: At first I thought this guy only has swivel shoulders and swivel feet. After playing around with him for a few minutes, though, I realized he has swivel/hinge shoulders and a swivel waist. He has a bit more articulation than I expected which is always a nice surprise. Personally, I like how Jakks articulated the shoulders. It makes me wish that Kirby could be part of the World of Nintendo line (my understanding is that it's not in the licensing agreement, though). 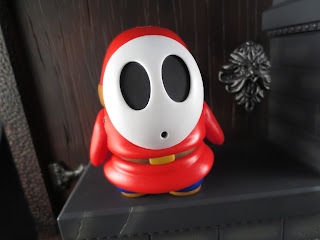 * This guy's sculpt is dead on. This is a Shy Guy, no doubts about it. The mask looks perfect. It just has that simple, bizarre expression that definitely conveys shyness. While the mask is a separate piece glued on to the main body, the strap holding it to the Shy Guy's head is part of the sculpt. The paint work isn't bad either. This guy definitely looks like he wandered out of a Nintendo game. 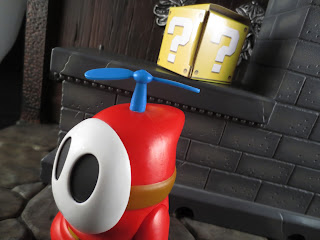 * The Shy Guy's hidden bonus accessory (which comes packaged in the cardboard "?" block is a blue propeller that can fit in the top of his head. What's so special about this? Technically, putting the propeller on this Shy Guy turns him into a Fly Guy. Fly Guys fly around and drop a variety of items. This little accessory kind of makes this figure like two figures in one, doesn't it? You get a Shy Guy and a Fly Guy! 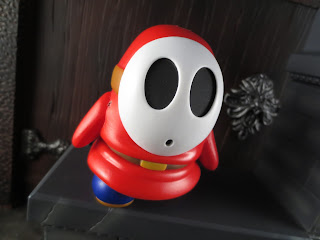 
* For the most part, the Shy Guy is just going to be standing there on your shelf. He's not well articulated nor is he incredibly dynamic. He's simply a short, squat little troublemaker. Unless you're a fan of this character, my guess is that the appeal will be lost on you. 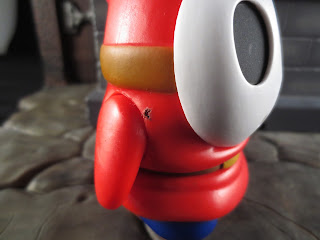 * My Shy Guy has a really odd little dark spot on his right shoulder. At first I thought it was a speck of dirt or junk that got mixed into the plastic but after attempting to remove it I'm not really sure what it is. It was crumbly, so maybe it was a glob of paint or something. I really have no idea but it's definitely a bit off-putting. 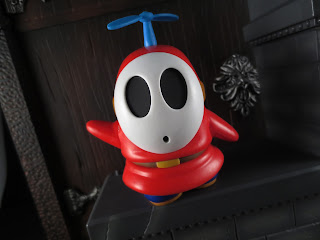 Other than the weird paint issue on my figure, I don't have any real complaints with this figure. I mean, he's definitely not as articulated as even your average World of Nintendo figure but, considering it's a Shy Guy, you have to ask yourself how much articulation was really necessary. Maybe that's why Nintendo hasn't had a very successful history with toylines: The characters just aren't designed to make for great action figures. Still, WoN is the toyline I've wanted for years and I'd encourage Nintendo fans to support it. The Shy Guy is a Good and a 1/2 figure and a fun addition to the collection.

I've reviewed plenty of other World of Nintendo figures from Jakks Pacific, including: