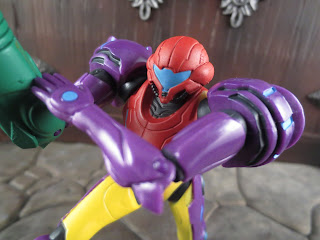 As I mentioned in my review of the Samus figure from World of Nintendo series 1-2, Metroid is probably the classic Nintendo franchise which I'm the last familiar with. That being said, I've still played a good number of the games including six of the games where this suit appears. While Gravity Suit Samus is a simple repaint of the Samus from earlier this year, she is a legitimate variant in that the Gravity Suit really does appear in the games and serves a very specific function. Series 1-4 has included quite a few variants (Fire Luigi, Tanooki Mario, Ocarina of Time Link, and Samus here) and thus it's not the most exciting series to have been released. Still, this is a nice looking figure, although it has some problems. Read on and learn more after the break... 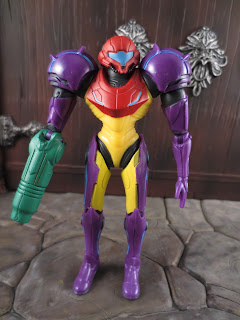 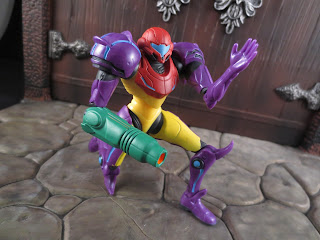 * The articulation on this figure has some very peculiar problems. On the positive side, though, I want to mention two things: First, Samus is capable of taking a couple of very cool poses. She looks great kneeling or holding her arm cannon out while bracing it with her left hand. Second, she's very sturdy. The joints all feel nice and durable. 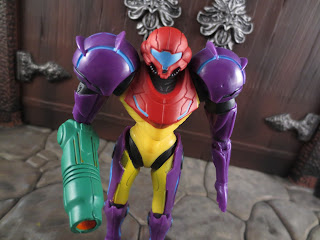 * The sculpt on this figure is still great and I kind of like the Gravity Suit color scheme. I wouldn't usually think of mixing all of those colors together but it works here. The paintwork is bright, neat, and clean. 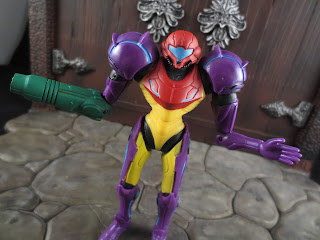 *Since this is simply a repaint, the same bizarre articulation that the original; Samus had is present here. Why give a figure swivel/hinge elbows with swivel shoulders? What's with the oddly limited hips? With a bit more thoughtful articulation this could have been an incredible toy. As it stands, she's somewhat frustrating. 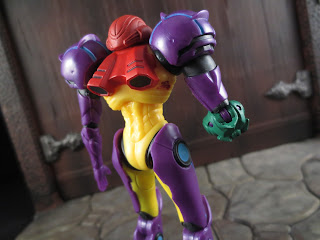 * While I love all of the intentional paintwork, there is a really odd splotch of errant red paint on Samus back right side. Can you see it in this picture? It looks like some major slop from the boosters on the back of her suit. Or ketchup. Maybe she needed to stage a Solid Snake styled escape from some Space Pirate prison. 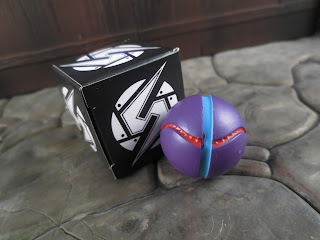 *  I have nothing against the inclusion of Samus' morph ball form as an accessory, but:

1. The paint is a bit messy on it. You can see the purple running into the blue in this picture.

2. Since everything about this figure is a repaint, wouldn't a new accessory of some sort have been nice. Maybe a little metroid, a weapons pick up, or an unhelmeted head? 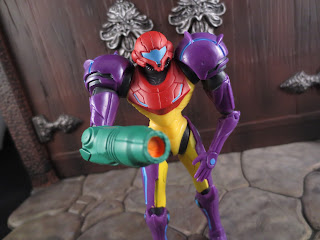 Gravity Suit Samus is still a fan figure but now that I have her I think I'm good on repaints of this armor. I'd really like to see a different styled armor (with reworked articulation) or a Zero Suit Samus. This is a Good figure but definitely one of the lesser figures in the line this year. Unless you're a completest on this line or a hardcore Metroid fan, this is probably one you can skip and not feel like you're missing out on anything.


I've mentioned that I've reviewed the basic Samus figure in this line, but I've also reviewed most other World of Nintendo figures, including: