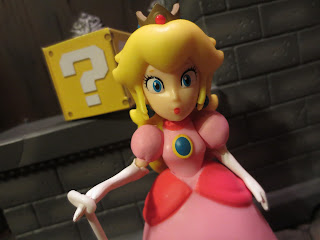 While I do hope that the Jakks Pacific World of Nintendo line goes on for a long time, I'm pretty content at this point with what we have. For me, having Mario, Yoshi, Luigi, Toad, Bowser, Wario, Donkey Kong, Link, and now Princess Peach is pretty much everyone we really need. Everyone else is just gravy at this point. Princess Peach is part of the newest series of figures which also includes Pink Yoshi, Fire Mario, Fox McCloud, and a Goomba. I found Princess Peach at a Toys 'R Us, but they were already sold out of Fox and the Goomba. They had Fire Mario and the Pink Yoshi but I held off since Toys 'R Us wanted a few dollars more for these than Target and other retailers. I needed the Princess, however. Ready for a closest look at the best character to use in Super Marior Bros. 2? Then join me after the break... 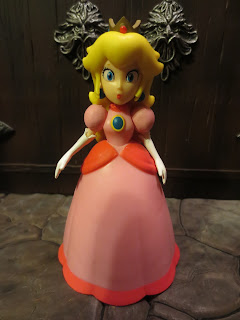 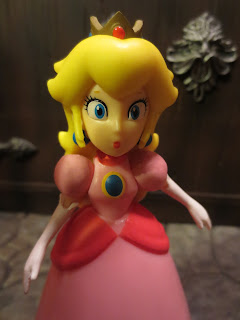 *I'm really digging the fun, cartoonish sculpts in this line. They're quite nice and instantly recognizable! Princess Peach is one of my favorites so far as she's cute, colorful, and has a funny, slightly surprised facial expression. The paint work is pretty neat and the color selection is spot on. 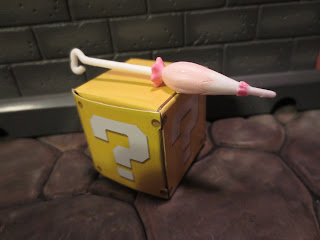 *All of the basic figures in this series have a surprise accessory and, surprisingly, Peach's is actually an accessory for use with the character rather than a prop like a mushroom or a coin: It's an umbrella! It comes in two pieces and is kind of neat. The handle is curved in the shape of a heart. Not only is it a cute little detail but it also allows the umbrella to be clipped onto Peach's hand. 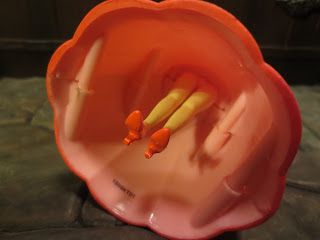 * When I first saw Princess Peach I assumed that she was going to be a "salt shaker" figure (a robed or dress wearing figure with a solid lower torso) but I was pleased to see that she actually has legs underneath her dress. They're not articulated but they are fully sculpted and painted. She wearing pink high heels and pink boy shorts under the dress. 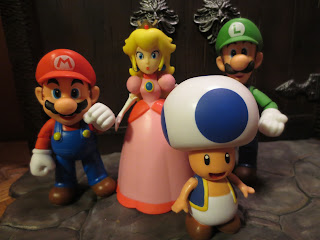 *I really always like to emphasize how good these figures look as a group. I know the S.H. Figuarts figures are technically better but, for $10 or less a pop, Jakks Pacific has released some very nice figures. I really hope Daisy, red Toad, and Rosalina get made at some point, too! 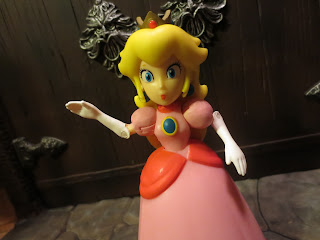 * My only real negative is with the articulation. Peach's swivel/hinge shoulders are nice but I really wish she had a ball jointed head. Ball joints for heads seem like they should be the easiest things in the world and they always radically improve the figure. Her neck joint is just a swivel and it is severely inhibited by her hair. Not too useful overall. 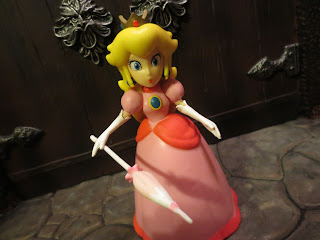 While they definitely have some distribution problems which making getting them difficult, I really think that Jakks Pacific has a line with some longevity on their hands. While the past year or two have been pretty good for Nintendo fans with Amiibos and this line, prior to this there really have never been many Nintendo toys. Well, at least with a variety of characters in a similar scale. Princess Peach/ The Princess/ Peach/ Princess Toadstool is another solid figure in this line. She's not perfect but she is fun and looks great on display. I'm giving her a Great rating overall!


I've reviewed a number of the World of Nintendo figures, including: