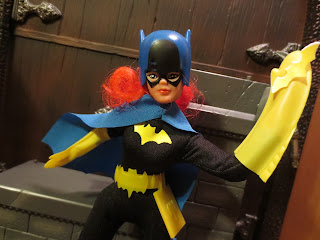 Today I'm looking at an interesting Batgirl action figure: Batgirl from the Batman Retro: First Appearance line by Figures Toy Co. Figures Toy Co. has been around for a number of years and they've really become the leading name in Mego reproduction figures. You know what Megos are, right? As a child of the 1980s, Megos were a little before my time and I only learned about them because of how prominent they were in ToyFare magazine. If you've never held one, imagine the combination of an 8 inch Barbie doll mixed with the articulation of a Marvel Legends figure. That's kind of the Mego...charm? They always feel really cheap to me but at the same time there's an undeniable uniqueness to them. I really don't collect them but I did have to pick up their newest Batgirl release which is based off of the Carmine Infantino cover art of Detective Comics 359. Ready for a closer look at Batgirl? Then join me after the break... 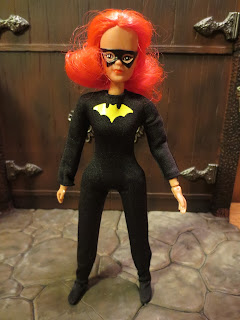 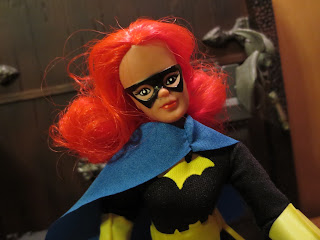 * I do not have a true Mego Batgirl in my collection so I appreciate how close to the original product Figures Toy Co. is able to get. Between her bright red rooted hair and her cute face, Batgirl really looks pretty nice. She's definitely dated but it's a nostalgic kind of dated look. What's nice is that she looks almost equally as good with her cowl off as she does with her cowl on. 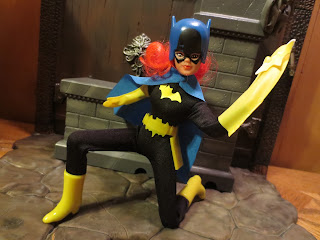 * I'll go back to what I said earlier when I compared Mego styled figures to Barbie meets Marvel Legends: They really do have a pretty wide range of articulation built around a standard body that isn't hindered by articulation or anything. There's a series of rubber connectors inside that give the neck, torso, hips, and shoulders a lot of movement. Pretty wild to see a 70's styled figure crouch so well, huh? 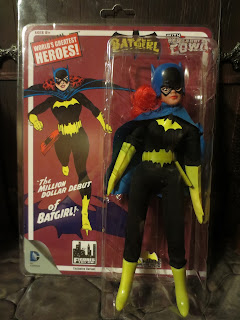 * I usually don't talk much about packaging on here but I'm making an exception since this packaging is intentionally reusable. When it comes new there's a plastic zip-tie through the peg hole that says Figures Toy Co. Once you remove that you can easily open and close the durable plastic clamshell. There are some twist ties but a little work will allow you to keep your Batgirl figure on display. I think she looks great in the package. 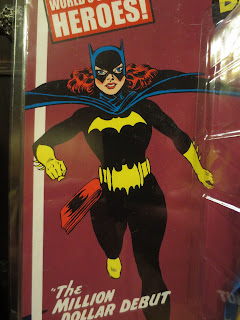 * Just wanted to shine some attention on the beautiful and classic Carmine Infantino artwork here. I love the purple color chosen for the background as well: It really matches the look of the background for Detective Comics 359, the book featuring the story "The Million Dollar Debut of Batgirl." I have a giant wooden poster of that cover on my wall so I get to look at it every day and I still find it amazing. 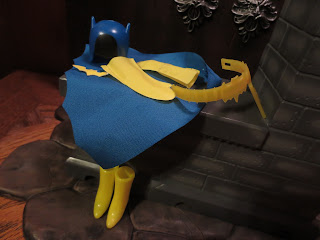 * I do like the look of the figures since everything is removable and can be added separately. The gloves, belt, boots, cape, and cowl can all be removed so you can swap parts between other figures or change up Batgirl's look. You can also remove her body suit, but I don't have any pictures of that. This isn't that kind of blog. 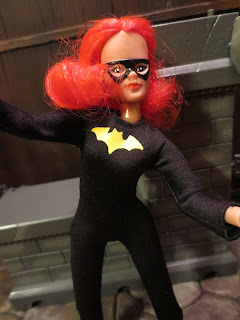 
* One of the things I've noticed about some Mego styled figures is that they tend to look contorted if the elastic/rubber bands inside are too tight. Every now and then you'll be trying to pose Batgirl and you'll see her neck, hips, or torso contort in some bizarre, awkward way. The hips are definitely the most noticeable part in my book. 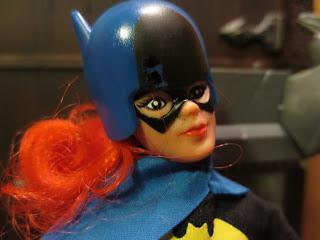 * The basic Batgirl figure from Figures Toy Co. has a simple blue visor, like the Mego World's Greatest Superhero version. This one has the black shadow on the front like the 1960's Batman art. It's accurate and would look great if the black paint weren't already flaking off. Seems like some parts of this figure were really done on the cheap. 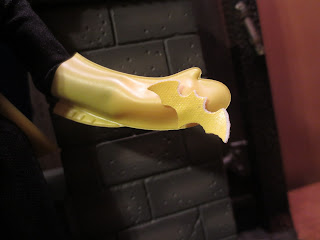 * I really wasn't sure what this was at first but, after a little thought, I think it's a Batarang. It comes glued to the plastic tray inside Batgirl's clamshell and it took a bit of pulling to remove it safely. It's a simple fabric-ish batsignal. Initially I thought that it was an extra symbol for her chest, but that doesn't really make sense. I think it's supposed to be a Batarang and it's sticky so you can stick it to her gloves. This really could have been executed so much better. Is it that hard to mold one Batarang to reuse with all of the heroes in this line? 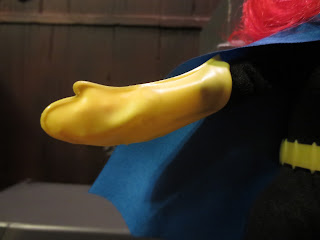 * I know they're fairly accurate to the vintage Mego figure this one is based off of but I hate these gloves. They're awkward, don't stay on well, translucent, and they look like oven mitts. These are really not awkward and if I were displaying Babs loose I'd consider just displaying her with them off. 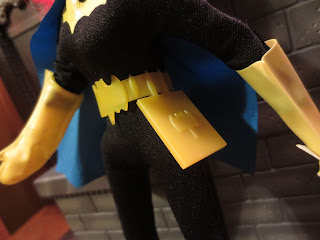 * Again, while I get the point of this figure is that it's a replica of the vintage Mego figure, since Figures Toy Co. is billing this as a First Appearance Batgirl from her Detective Comics 359 debut I wish they would have painted her satchel red. That's a really unique part of that costume and it would have been nice if it has been captured here. 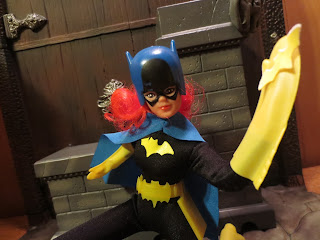 Doing figures like this that truly reflect the era they were created in can be tricky. I'm sure there are plenty of Mego fans who had these figures as a kid who look at these and love every bit of them, kind of the way I really love the Funko ReAction figures based on Kenner product from the late 1970s and early 1980s (that stuff was still floating around when I was a kid). I can definitely see the appeal here and I'm glad to have this as part of the Batgirl collection but, if I weren't obsessed with grabbing every piece of Batgirl merchandise I can get my hands on, I'd probably not give these a second glance. There are just too many odd problems here for me, especially for the price. I'm giving Batgirl an Eh and a 1/2 rating. She's a neat item for collectors of the character or of this style of figure but your average collector need not apply.

I've reviewed a ton of Batgirl stuff on the site, including: