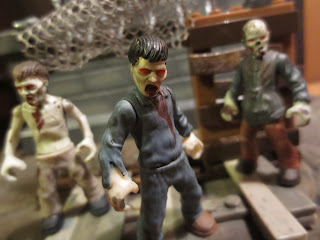 Today I'm back with another terrifying legion of the undead from Mega Blocks' Call of Duty building series: The Zombies Outbreak! This is another set of six zombie minifigures and a brick built diorama to display them with. This is another set that was originally released last fall and which my parents found on clearance at a Target store. I'm always up for more zombies to roam my shelves! Ready for a closer look at the Zombies Outbreak? Then join me after the break... 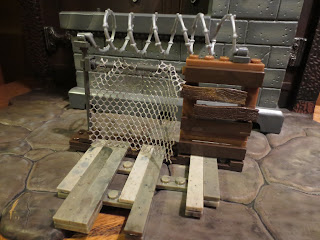 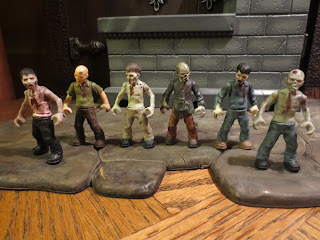 
*One of the things I love about these sets is that each pack comes with lots of zombies. You get 6 fairly unique zombies with this set and most of the other sets released last year (this year's newer sets only seem to feature four zombies for the same price). Each zombie stands around 2 1/8ths inches tall and features a swivel waist, swivel shoulders, and a ball jointed neck. 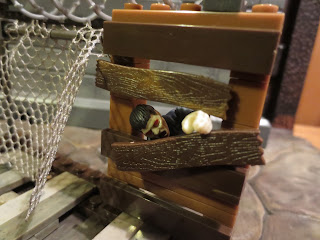 * Another thing I like about these sets is that there are some uniquely textured bricks. I love the warped wooden slats that connect across the window. The pieces have an excellent wood grain texture and look fantastic! I love how they can be slid aside to allow the zombie to creep his way through! 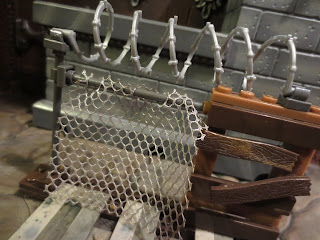 *Another really neat feature of the playset is the barbed wire fence and the chain link fence. The barbed wire fence is fairly pliable and stretches realistically across the gap running from the pole to the top of the barricaded window.  The chain link fence is really clever, though, as it's made from a piece of netting. It looks like a chain link fence but it can be "twisted" as zombies crawl their way under or tear their way around. I'm not sure I've ever seen this technique used before in any building block system, including Lego, and I think it's rather ingenious. 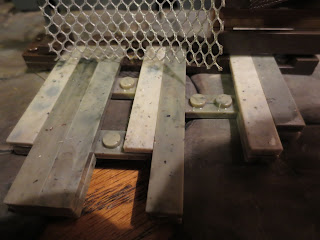 * The Call of Duty sets have some bricks that feature some great swirled paint colors. The "wood" pieces feature a mixture of browns while the floor pieces are gray and have mixed in various whites, blacks, and browns to give them the appearance of concrete. It looks really great! Lego seems reluctant to do things like this but it's nice to see that Mega Blocks is showing how impressive it can look. 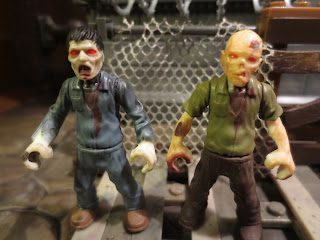 * I love the zombies in these sets! The first two here are both wearing short sleeved, collared shirts. All of the zombies in this set have bright red eyes and I have to say that it makes them look much more terrifying than your garden variety zombie! These guys are really quite fun to play with: The ball jointed heads give you the opportunity to make them rather expressive in their movements. 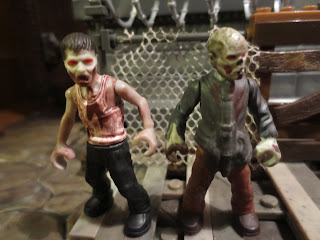 * These two zombies each feature unique torsos for this set. The zombie on the left is wearing a white "wife beater" t-shirt and is absolutely doused in blood. He's definitely my favorite zombie of the set!  The zombie on the right is wearing what looks to me like a gray straitjacket. These guys really have some excellent paintwork that helps them to look quite unique and extremely menacing! 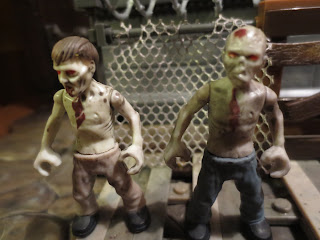 * This last pair features two shirtless zombies. There's a lot of detail on their bare torsos and they both have some creepy, brain eating headsculpts. 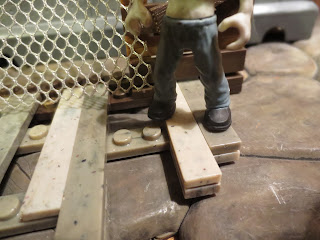 *These guys have the same problem as the Zombies Horde set I reviewed previously: It's tough to get the zombies to attach to the studs properly. The leg stance of the zombie figures is to narrow to allow them to put two feet on each stud without stretching the legs. Also, this set doesn't really have any reasonable places for the zombies to stand, which is kind of frustrating. 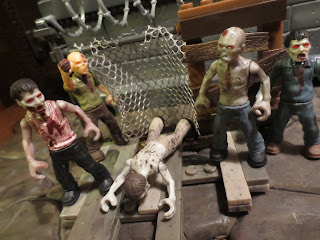 I have to say that I like this set better than I like the Zombies Horde set. The zombies are a bit more terrifying and gruesome and the set itself is more interesting. While there's less places to stand he zombies while connected to studs, the chain link fence and the boarded up window really help to give this set some great interactive features. Overall, I'd give this set a Great rating. It's a fun set. It's a very simple build, but it does look impressive when assembled.
Posted by Barbecue17 at 10/26/2015