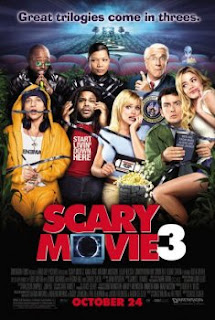 Movie Thoughts by Barbecue17
The movie I watched: Scary Movie 3
It was directed by: David Zucker
It was released in: 2003

Please briefly summarize the plot: Cindy Campbell (Anna Farris) is now a reporter trying to track down a cursed videotape. Tom Logan (Charlie Sheen) and his brother George (Simon Rex) are farmers being harassed by aliens. Leslie Nielsen is the President of the United States trying to keep the world safe. Honestly, the plot doesn't matter much in this movie. It's a loose continuation of the previous Wayans family films that parodies The Ring, Signs, 8 Mile, The Matrix series, and The Others. The plot is nonsensical and just an excuse for jokes and sight gags.


How is this film culturally/ historically significant?:  While the first two films in the series were directed by Keenan Ivory Wayans, the third film in the series was directed by David Zucker of Airplane! and Naked Gun fame. This was the first parody film David Zucker has directed since 1996's High School High. It's also another chance to see Leslie Nielsen being Leslie Nielsen, which is always hilarious. While most folks look at many parodies as goofy throwaway films that often heavily date themselves, they do provide an interesting look into the popular culture of their particular era.


What genre would you place this film in? Comedy/ Parody/ Horror

How did this film make you feel: The point of a film like this is throw as many jokes at the wall as possible to see what sticks. This film does that and while a number of the jokes stick, there are also a number that fall flat. Oddly enough, despite the comedy of this movie, it till reminds me of how the creepy The Ring is.

What were the most impactful moments of the film? The funniest parts of most parody films to me are the stupid background gags. There's a police officer whose hat gets larger every time she appears on camera and, for some reason, I found that hilarious. The parody of Signs in the movie is pretty funny, however, as there's an M. Night Shyamalan lookalike who keeps showing up to pester Charlie Sheen. Oh, and there's a slumber party fight between Pamela Anderson and Jenny McCarthy. Just saying.

With what other movies would you compare this film? Obviously the first two Scary Movie films (although this one is rated PG-13 and is a bit more tame), but with the cast and Zucker involved, you'll think of other parody films such as Dracula: Dead and Loving It, Hot Shots, and any other film starring Leslie Nielsen.

What stands out about this film? It's not a great movie by any stretch of the imagination and ends up feeling overly crowded with too many characters and plotlines for a simple parody film but, if you like these kinds of movies and want a bit of early 2000s nostalgia, you'll get a laugh or too. Leslie Neilsen is always funny and I can't ever knock Anna Faris. Charlie Sheen is quite subdued but has some funny lines that will definitely make you think back to how Hot Shots is one of the greatest films ever made. Queen Latifah and Eddie Griffin also have a very funny scene parodying The Matrix.

What message do you believe the filmmaker was trying to convey? Pootie Tang was a terrible movie, Signs was definitely a film ripe for parody, the Matrix sequels disappointed everyone, and no matter how you package it, The Ring is a creepy, creepy film.