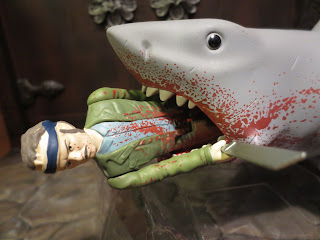 Funko's Jaws line really seems to have resonated with a wide variety of collectors and movie fans. It was also responsible for what was perhaps the coolest exclusive at SDCC 2015: The Great White Shark and Quint Final Battle. While Jaws/ Great White Shark/ Bruce and Quint are both available separately in this line this set not only features some great packaging but also offers up a new head sculpt for Quint, a new accessory, and plenty of blood. This was also available through Toys 'R Us which is where I bought it back at the end of July. I've been sitting on this review since early August just so I could have something this awesome for 31 Days of Toy Terror. Ready for a closer look? Then join me after the break... 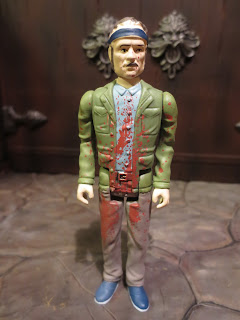 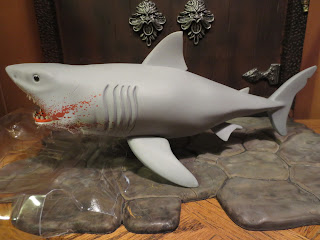 * Let me start off by saying that this shark is awesome! I was really curious how Funko was going to handle Bruce the shark in their retro influenced ReAction style and now that he's in hand, I'm not disappointed in the least. He is very solid (he's not a rubbery dollar store toy at all) and actually has some nice heft to him. Jaws is as intimidating in 1/18th scale as he is on the silver screen! 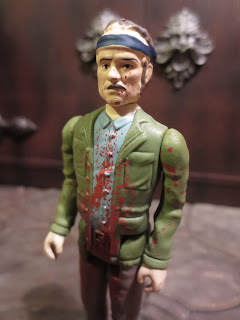 *When pictures of this set were first shown I was under the impression that Quint would just be an accessory sticking out of Jaws' mouth. That turned out to be incorrect: Quint is a full fledged ReAction figure with a new headsculpt and a great bloody paintjob. While he's mostly similar to the single carded version I reviewed near the end of July the bloody spray and bandanna around his head definitely separate the two. I really love the look of the blood on this set. It's incredible! I love seeing something "inappropriate" like this in the nostalgic ReAction series. It just seems so subversive and fun! 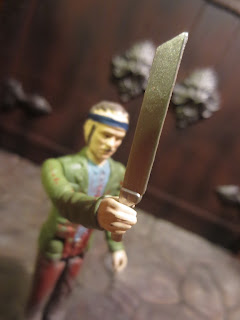 *Quint even comes with a new accessory: His wicked looking machete that he attempted to fight off Jaws with shortly before his untimely demise. It's a nice silvery accessory and fits perfectly in Quint's hand. Doesn't Quint look like he could also go a few rounds against Jason Voorhees? 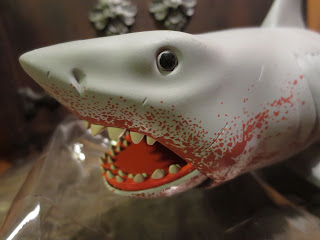 * I love the look of the shark up close! Seriously, Bruce the shark just looks so menacing here. The blood spray is exceptional and the rows of teeth, remorseless black eyes, and various scars really just bring this piece together nicely. This is beautiful work. 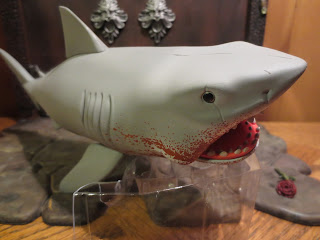 * One problem I have with Jaws here is that he really can't stand. His front end is much heavier than his tail end and so when you sit him on the counter he tilts forward. I really wish Funko had weighed down the rear of the shark to help him display better. As you can see, I used random vacuformed action figure trays to keep him up during the shoot. 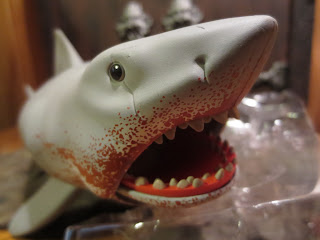 * The hinge on Bruce the shark's jaw easily falls off. Well, not when you're just playing with the toy itself, but whenever you attempt to move the jaw. It goes back in easily too, though, but it's still a minor annoyance. 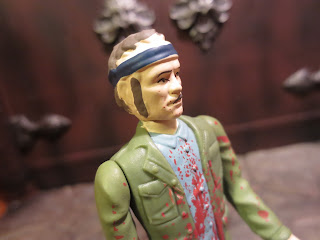 *The paint work on Quint's hair is really messy. Look closely around the headband and hair line and you can see that there are a number of spots not painted. Perhaps you could argue that Quint is so terrified of Jaws that his hair is falling out, but you'd be wrong: Quint ain't afraid of crap. 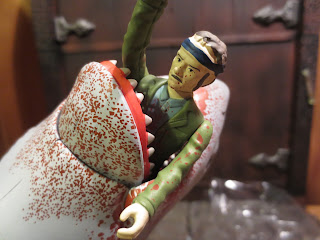 This is a Jaws action figure with a bloody mouth that you can put an entire figure in! How amazing is that? Hasbro's Doctor Strange boxed set was a pretty cool SDCC exclusive but I have a hard time of finding anything else that rivals the sheer inspired awesomeness of this set. While I have some nitpicks about the figures themselves, the presentation and inspiration displayed here is just too incredible. This is a boxed set of a man getting eaten by a shark! How can you not love it? This is a Great and 1 1/2 set and a fantastic toy. Hopefully you'll be able to track one down if you haven't already as this is without a doubt the coolest Jaws collectible I know about!

As I mentioned, I did review the basic Quint from the Jaws line. I've also reviewed the following ReAction figures: