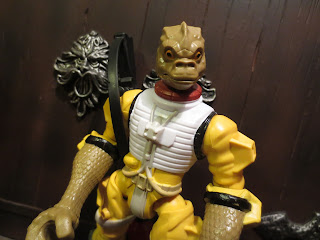 As I continue showing off my Force Friday haul from my second stop, Wal-Mart, I'm now working my way through the single packed Hero Mashers figures. I've talked about the pros and cons of these figures more extensively in previous reviews so, in order to not seem overly redundant, I'm focusing a bit more on the unique elements of the figures here versus my overall issues with the line. read some of the earlier reviews of these for the full scoop. Anyways, today I'm looking at Bossk! Bossk, for some reason, has turned out to be my little one's favorite figure from this line. She really digs him although at first she stated that she wanted to eat him. I'm not sure why. She hasn't attempted to eat him since then but she does pretend to feed him to me, my wife, and her stuffed Chewbacca. Bizarre, huh? Anyways, more about Bossk after the break... 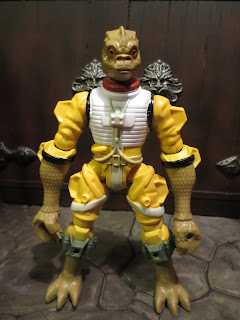 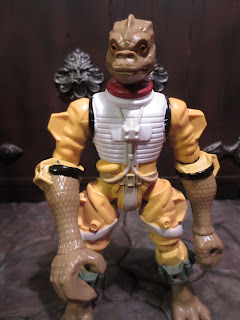 
* Bossk has a great sculpt. Bossk is definitely one of the more unique Star Wars bounty hunters and he's captured perfectly here. His flightsuit is quite film accurate and his arms, feet, and head really capture the character well. I was surprised by how many different textures are on this figure, too. He's quite well done. 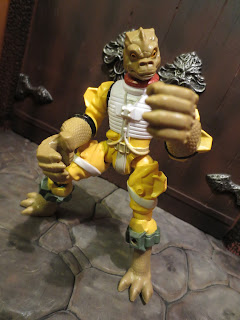 * Like the rest of the figures in this series, Bossk is a blast to play with. He's fun, durable, and has some decent motion everywhere except his shoulders which are just swivel joints instead of swivel/hinges. He's fun to mash with other characters, too. My personal favorite is putting Darth Maul's head on Bossk's body with Maul's black boots and Kanan Jarrus's gloves to make a space pilot Darth Maul. You know, cause why not? 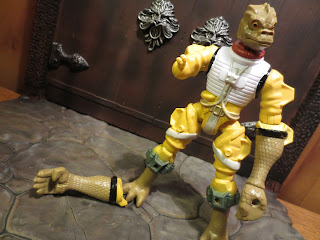 *Maybe it's because his arms are a bit longer than everyone else but Bossk's arms tend to detach a bit easier. It's not a huge problem but it does make getting him to hold his weapon or utilizing his swivel/hinged elbows a bit irksome. 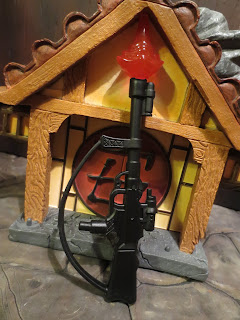 * I like the sculpt of Bossk's mortar gun. I love the blast effect, too. What I don't like is that the blast effect isn't removable and thus he has a very, very difficult time holding it. It tends to cause him to tip over. These are labeled as being for ages four and up so why not make them removable pieces? It doesn't make any sense. 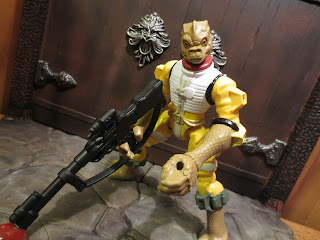 I'm a huge Bossk fan (and now my little one is, too) and overall I like this figure. Unfortunately, he suffers from the other problems figures in this line have: Limited shoulder articulation and the non-removable blast effect on his mortar rifle. Still, he is quite fun and he looks great. The paint and sculpt are far more intricate than I would have initially expected from this Hasbro in this line. It's cool that so many characters have unique sculpts with little to no reuse. Overall, I'm Bossk a Good and a 1/2 rating. He's not perfect but he is lots of fun.

And plenty of other Star Wars figures: