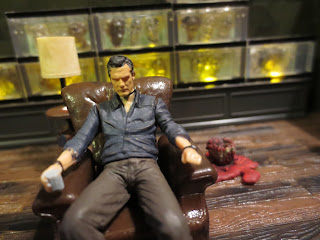 Today I'm looking at another set from McFarlane Toys' The Walking Dead building sets based off of the award winning AMC television series: The Governor's Room. Governor Philip Blake is the primary antagonist of the third and fourth seasons of the television series and has become another recognizable and iconic character from the show. The Governor originally appeared in The Walking Dead comic series where he made quite the impression as a narcissistic, sadistic despot. David Morissey interpreted him a little differently in the TV series, creating an incredibly memorable and sinister character. The building set I'm looking at today depicts the governor and his daughter Penny during feeding time in the Governor's private chambers. Ready for a closer look at the horror this set unleashes? Then join me after the break... 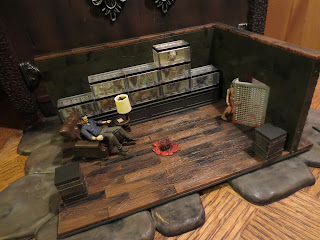 Figures Included: The Governor and Penny 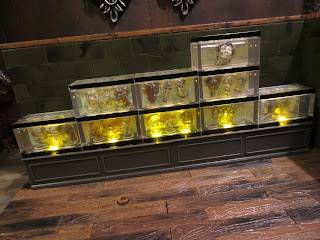 * The coolest feature of this set, without a doubt, is that the governor's wall of fish tanks filled with heads is included. The second coolest thing is that the fish tanks can light up. It looks less impressive in a photo but in person it's a creepy effect. There are two switches and two separate battery compartments for the lights. 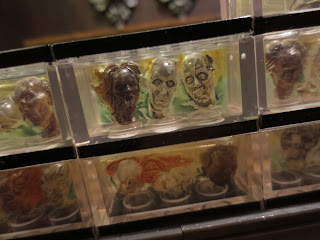 * The floating heads are really cool. They're attached to pieces that can be placed inside of the fish tanks and they really have the look of old flesh submerged in water. The heads are grotesquely detailed and can be reorganized in different patterns, giving you the chance to tweak the diorama to your liking. 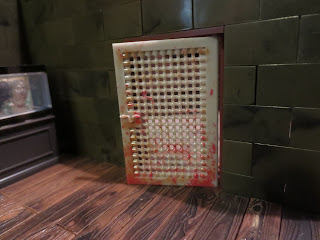 * I love this door. It's just really creepy looking and has a great bloody paint job. It's a little thing but it really stands out. 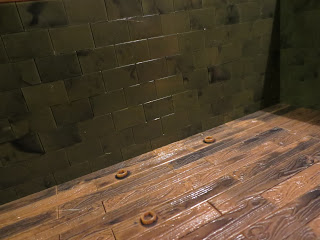 * One of the things I like about both McFarlane's building sets and Mega Blocks' Call of Duty sets is that the bricks feature some unique textures and some multicolored bricks. The floor not only has an excellent wood grain texture but it also has a great darker wash that brings out the details you might see on a hard wood floor. The bricks on the back are also marbled with different shades of green to give a grimy, moldy appearance. The set features extra floor plans with studs so you can move or augment the places where accessories can be attached. 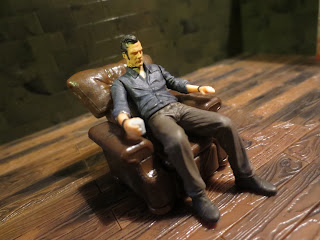 * What would the Governor's room be without the Governor himself? He's permanently in a sitting position but you can move his shoulders and his neck to give the sculpt a little personality. His recliner is awesome and features some very nice sculpted pieces to give it a true, leather-like appearance. 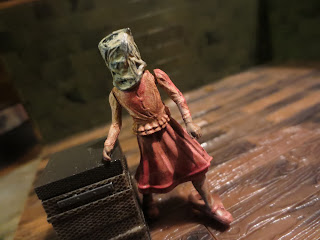 * The Governor's daughter, Penny, is an excellent and creepy zombie sculpt. She stands at 1 3/4 inches tall and while she has some articulation (swivel shoulders, swivel waist, and a swivel neck) she's really just intended to stand around and look creepy. I'll address the fact that she doesn't stand up well shortly, but as for the appearance of this figure? Very creepy! 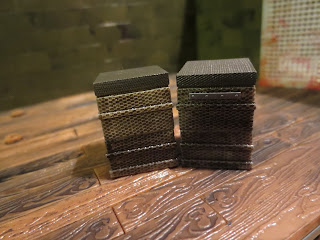 *Two nicely painted storage bins come with the set. These simply add some decoration to the room. I can't remember if these have any significance on the show, but I'm always happy to get a few extras. 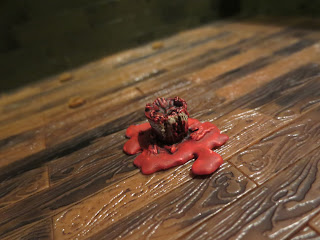 * A bucket of bloody body parts comes with the set to help the Governor feed his daughter. The bucket has a great pool of blood around it and can easily sit anywhere in the set. It's pieces like this that make me miss the old McFarlane toys and how they were always pushing the boundaries. 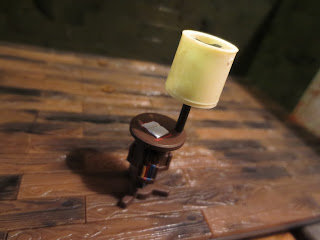 * The table is another detailed piece that can be moved around and attached to the various floor pegs in the Governor's Room set. The paint is really nice and I love the inclusion of the open book on the table and the small books on the little shelves underneath. 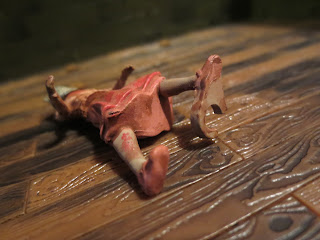 * Like the walker in the "Daryl with Chopper" set, Penny also has trouble standing up. Actually, unless I prop her up against something, she really just cannot stand. She doesn't include the clear plastic stand that other walkers come with (even though she has a spot to attach it with). 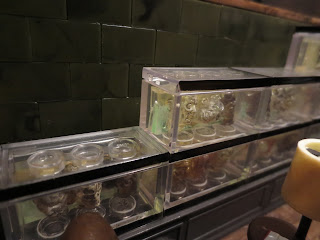 *My set was missing a few pieces. Well, they weren't completely missing but they were incorrect. You see, the rows of fish tanks with the zombie heads in them are intended to have a very specific appearance with black lines running around the edges. There were certain pieces  received that had the lines in the wrong pieces. It's not a disastrous case of missing pieces but it's certainly annoying. 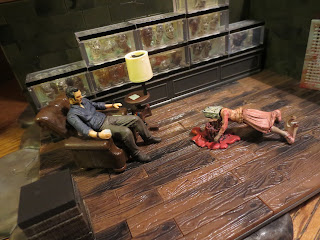 For the most part this is a pretty solid set. I'm still a little unsure as to who the target audience for this is as it's a bit too expensive and involved for a casual buyer but not versatile enough for folks who want to make their own creations. I like these because they remind me of the dioramas that you see at museums or of the old McFarlane Monsters sets from the late 1990s. This set has a few problems such as the wrong striping on some of the fish tanks and the fact that Penny can't stand, but I also can't deny how visually impressive the set is. Overall, this set gets a Great rating from me. I received it as a gift from my parents who found it on a very extreme clearance sale and I'm thrilled with it. Shop around and I'm sure you'll find a price you're happy with, too!
Posted by Barbecue17 at 10/28/2015