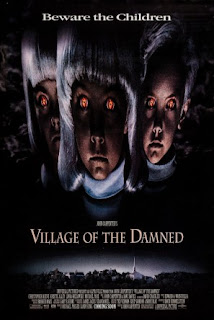 Movie Thoughts by Barbecue17
The movie I watched: Village of the Damned
It was directed by: John Carpenter
It was released in: 1995

Please briefly summarize the plot: A mysterious event causes everyone in the small coastal town of Midwich, California to lose consciousness for a few hours. While government officials investigate the occurrence but find nothing, an unusual number of the town's women find themselves pregnant. Nine months later 10 women in the town give birth. While one of the infants is stillborn, the rest are healthy with white hair, blue eyes, and pale skin. Something is wrong with the children, however, and the town soon learns that they might not be able to stop them...


How is this film culturally/ historically significant?:  There are two fairly significant things about this film: First, it's a remake of a the 1960 film of the same name which was based off of the 957 novel Village of the Cuckoos. Things are modernized a bit and the setting is moved from England to the US. The second point of significance is that this was the last film Christopher Reeve made before his tragic, paralyzing accident (which occurred about a month after the release of the film).

What genre would you place this film in? Horror/ Science Fiction/ Weird Kids

How did this film make you feel: While the movie was marketed as a horror film, possibly about possessed children or something, it actually is more of a science-fiction film. Initially the film has a creepy atmosphere but, once the children begin communicating and you start to get a handle on what's going on, the tone changes. It becomes less frightening, but not necessarily in a bad way.

What were the most impactful moments of the film? The early scenes in the film are actually quite frightening as they really leave you feeling like anything could happen. The scenes with many of the women going through the stages of their pregnancy at the same time are also fun in an eerie kind of way. Once the kids start to grow up, some of the ways they prompt people to kill themselves really are pretty gruesome. Not much is shown but there is definitely a lot implied.

With what other movies would you compare this film? While watching this I kept thinking about Children of the Corn (due to the evil kids) and The Crazies (both versions) due to the scenes where the government is occupying the small village of Midwich.

What stands out about this film? The kids are creepy looking and quite menacing. Christopher Reeve does a great job as a compassionate man pushed to his limits. Someone performs a self autopsy. The entire first 15 or so minutes of the movie are pretty gripping.

What message do you believe the filmmaker was trying to convey? Stay the heck away from creepy kids, never trust the government, and don't fall asleep while using a grill.