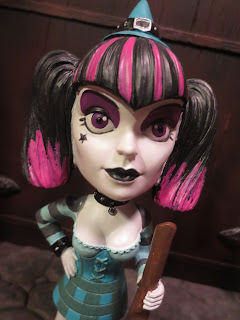 Today I'm looking at the Goth Witch from Entertainment Earth's Goth Hotties bobble head line. Back in August Entertainment Earth had a sale where I ordered a. ton of awesome Halloween themed toys, including the full set of four of these for $6. Yup; I paid $1.50 each for these! These are essentially a series of goth girls dressed in Halloween Costumes. Or maybe they're actual monsters dressed in goth outfits. Or maybe they're just regular women dressed as goth versions of popular monsters. Who knows? All I know is that they're kind of fun and didn't cost very much, so I picked them up to add to your Halloween amusement. Ready for a closer look at the Goth Witch? Then join me after the break... 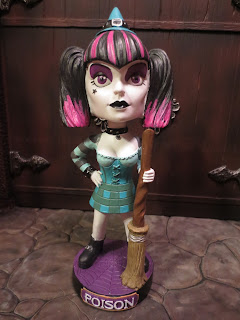 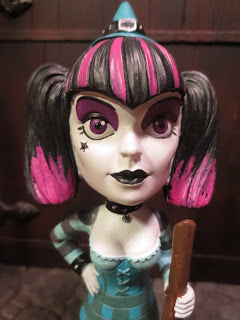 * I love the look of these! This is your garden variety pale, attractive goth girl with a great hair style. Well, maybe it's a wig, but still, who cares?  She's got a nice hair and makeup color scheme of purple and black: One of the major Halloween colors and one of the second tier Halloween colors. She kind of looks like that goth lady from NCIS. 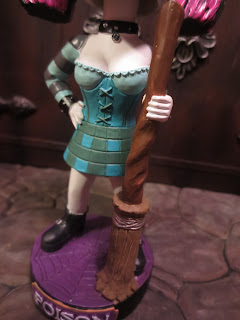 * The Goth Witch has a stylishly undersized witches hat that complements her blue and green plaid dress. I really like that Entertainment Earth gave the figure some more colors rather than just black and white. It makes the figure much more eye catching. She also has a broom to complete her costume. There's a nice bit of detail on it which really helps to elevate it. This wasn't an afterthought to her costume that she grabbed from the closet while running out the door: She really planned this out! 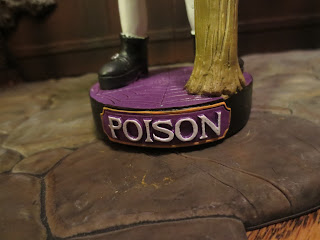 * Each of the bases in this series has a word or slogan that conveys a simple little message. The witch's base has..."Poison?" Huh. I would expect something like "Magical" or "Broom service" or "Hexcellent." Poison, though? Is she a huge glam metal fan? Do you put this out near your cleaning products to keep away small children frightened of witches? Does she feature lead based paint? I don't get it. 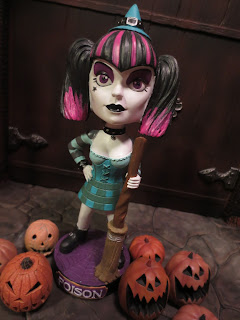 It's hard to not like a sexy goth witch with a bobble head that cost less than a bottle of Gatorade. Even the bizarre "Poison" logo doesn't really lower my score. This is a Great little decoration. If I'd paid more for her I'd probably be a bit more harsh, but I still really do like her. She's fun, spooky, and makes a nice little mantle piece for the Halloween season. If you're into goth girls, witches, or Bret Michaels, you'll probably dig this figure. I like the unorthodox witchy look that still captures all the necessary style elements while managing to look more unique than the standard black witches' garb. Nice work, Entertainment Earth!

The Imaginext Collectible Figures series 4 Witch
Does the Lego Fortune Teller count?
I also picked up the Lego Witch polybag set.
The Funko MLP Trixie Lulamoon
The ReAction Lo Pan is basically a warlock!
Radagast the Brown from the Hobbit is a wizard.
I'm pretty sure the Monsters set by Hing Fat had a witch in it.
This terrible Rita Repulsa is definitely a space witch!
Posted by Barbecue17 at 10/20/2015