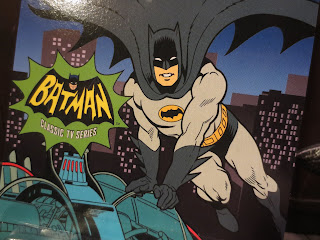 A few weeks ago I walked into Wal-Mart and found the complete set of their 2015 exclusive Hot Wheels Batman series. Over the next day or two I'll be offering a brief look at all of these as a bit of a treat during October! You know: Bats and Cats and Halloween. It fits the theme! The first car in this six car set is the Batmobile from the Classic 1966 TV Series. Commonly known as the '66 Batmobile or as the Barris Batmobile after the vehicle's designer, George Barris,  the argument could be made that this is the most iconic Batmobile in existence. Based off of a 1955 Lincoln Futura, the Barris Batmobile was first released in the Hot Wheels line in 2007. It has been repackaged in some fashion almost every year since it's introduction although with unique art. Ready for a closer look? Then join me after the break... 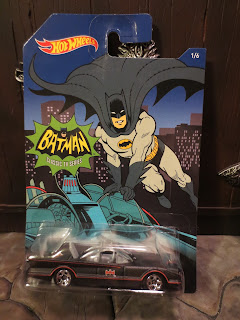 * I really like the card art. It's a great classic Batman leaping into the driver's seat of the Batmobile with the Gotham skyline behind him. You also get the classic TV series logo in a prominent position. 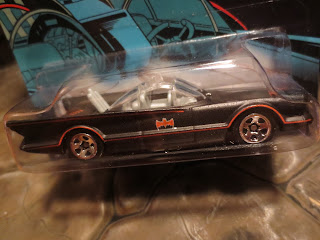 * Forgive me right now, but it's tough getting good pictures of these cars without taking them out of the package. Unfortunately, I like the look of the cards and plan on keeping these on display carded. Anyways, this is a very faithful representation of the Barris Batmobile in a very small scale (1/64th I believe). It seems like it's mostly plastic. The paint has a very matte finish to it and is neat and clean, even on the tiny Bat-logo. 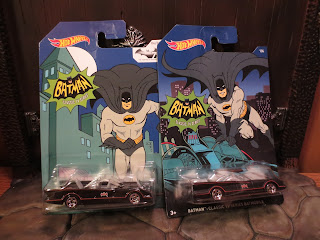 * Here's a comparison shot with last year's "75 Years of Batman Series." Not only is the card art completely different but the paintjobs differ as well. Last year's Barris Batmobile had a much glossier paint job while this year's has a much flatter, matte paint job. When it comes to the Barris Batmobile, I think shinier works better so last year's car gets the advantage. Still, for under a dollar this is a nice collectible. I'm giving it a Great rating.