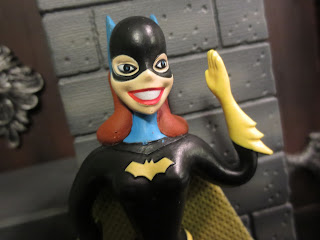 In the fall of 1997, fresh on the heels of the turd that was Batman & Robin, Batman: The Animated Series gave way to its spiritual successor The New Batman Adventures. With a greater focus on Batman's crime-fighting partners, The New Batman Adventures revamped the designs of the characters, including Batgirl. With a more stylized appearance, a new costume reflecting the Carmine Infantino cover of Detective Comics #359, and a new voice actress in Tara Strong, Barbara Gordon's Batgirl experienced a resurgence in popularity. Today I'm looking at the Batgirl bendable figure from NJ Croce's The New Batman Adventures Bendable line. I've already looked at a few of the Batman Classic TV Series bendable figures from NJ Croce and I've had mixed feelings on them. Ready to see how this Batgirl stands up to other figures? Then join me after the break... 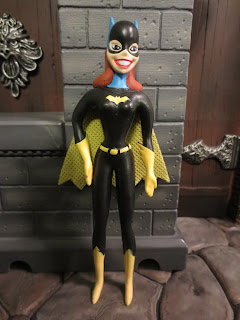 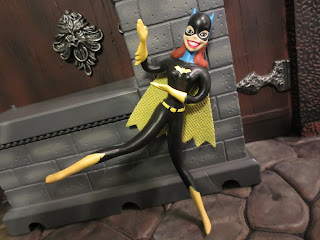 *One of the complaints I had about the other NJ Croce figures was that they just weren't very bendable. Batman and Batgirl were both thicker than you'd expect a bendy figure to be and thus didn't hold most poses very well. The Bruce Timm inspired character designs of these characters, however, seem much more fitting for the bendy aesthetic. Batgirl still feels sturdy while also being capable of some fun poses. 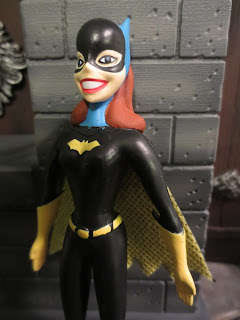 * The paintwork and sculpt of this figure is pretty decent. Considering the stylized look of Batgirl's character design, she takes to the softer sculpt of the medium fairly well. The paintwork is quite neat and the black and yellow together mesh nicely. I love the colors on this outfit and they're rendered here quite nicely. 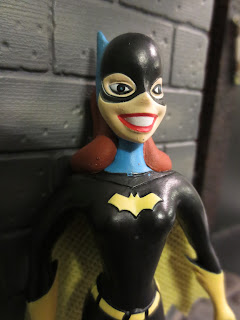 *It can be difficult to translate a stylized two-dimensional animated character into a three-dimensional sculpt. With a drawing you're always seeing the side of the character in the proportionate way that the artist wants you to see. An action figure doesn't get that luxury, however, and Batgirl definitely has a face that can look rather odd from certain angles. Seriously, from certain angles you might think she's hopped up on Joker gas due to that massive grin! 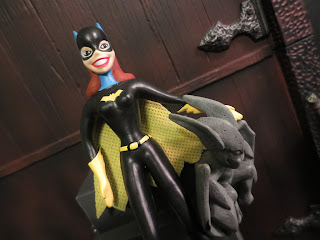 Batgirl is a fairly nice bendable figure. I'm not the biggest fan of bendable figures but I think this is pretty decent. If I weren't a Batgirl collector I don't think I would have snapped these up but, for fans or collectors of a particular character, these might be pretty interesting. I'd give this figure a Good rating overall, although part of me wonders about who the audience is for these lines as a whole, particularly in light of DC Collectibles' ever expanding Batman: The Animated Series and The New Batman Adventures lines.