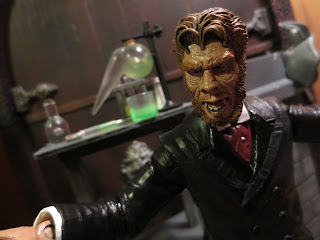 As we creep ever closer to to Halloween, 31 Days of Toy Terror Returns continues to bring you glimpses of some of the spookiest, scariest action figures around! Today I'm looking at another figure from Diamond Select's Universal Monsters Select line: Dr. Jekyll and Mr. Hyde. What's rather interesting about this figure is that it's not based on one of Universal's straight up horror films. Instead, it's actually based on 1953's Abbott and Costello Meet Dr. Jekyll and Mr. Hyde. While Abbott and Costello are nowhere to be seen in this line, Diamond did wisely pick this figure as it gives us a great version of Dr. Jekyll, a classic horror icon, portrayed by the legendary Boris Karloff. While we have Karloff in his Mummy and Frankenstein appearances, it's cool to have a version of him that's not in make-up. I should point out that there are two versions of this figure: This version, which was sold through the direct market and at comic stores, and a version that was sold exclusively through Toys 'R Us that is missing the Dr. Jekyll head and the lab equipment. Ready for a closer look at Dr. Jekyll and Mr. Hyde? Then join me after the break... 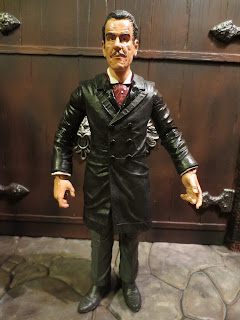 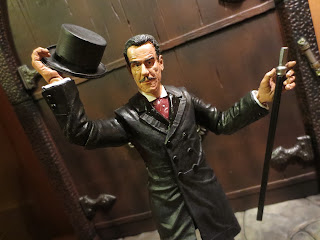 * While Dr. Jekyll's legs are somewhat hingered by his long coat, he really has all of the articulation I could want for the character. Everything seems nice and solid and works just fine. He can be a very expressive piece, particularly when you pair him with his many incredible accessories. 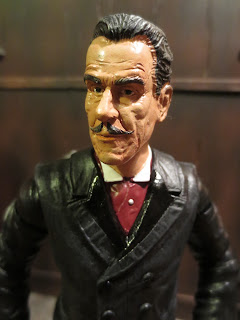 * This isn't a bad Boris Karloff likeness at all in this role. Karloff was in his mid 60s when the movie was made and I think it captures his appearance then fairly well. He looked a little different in the movie with the mustache and all, but this is undeniably him. The paint work is clean and the outfit looks really good. He's dressed in a very proper gentlemen's outfit of an overcoat, and trousers, all in darker shades. 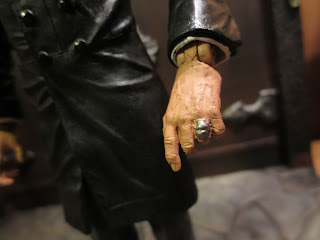 * I love the little ring detail on the Jekyll and Hyde hands. There is some fine detail sculpting here and it really gives the figure an excellent presence on the shelf. This is another excellent sculpt from Jean St. Jean. 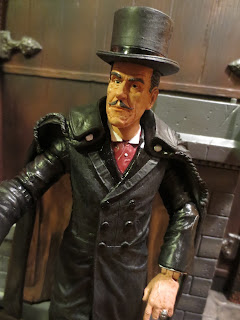 * To prepare Dr. Jekyll or Mr. Hyde for a night out on the town you can adorn him with his nice black and silver lined cloak  and a top hat. It doesn't fit perfectly but, for the most part, it works just fine. The cloak is made from a softer plastic and easily drapes over the figure's shoulders. Interestingly, it's sculpted on the right side so that the figure can lift one of his harms. Perhaps this allows for a more violent Mr. Hyde pose? 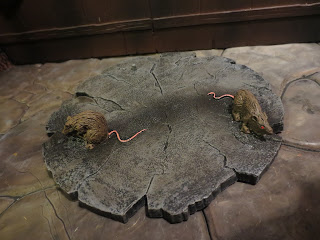 * While he is fully capable of standing on his own, Dr. Jekyll comes with a base. It looks like a standard slap of cracking cement (maybe it's the floor of his lab?) and is covered with a layer of grim and two red eyed rats. The rats are not removable but they do have some excellent paint details. 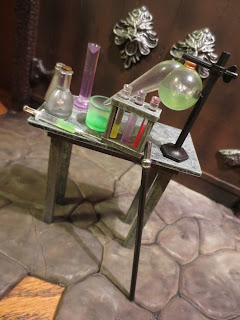 * The accessories really and truly make this set. For Dr. Jekyll flitting about town, the set includes his cane. It's a nice piece and he looks good holding it. The best stuff, though, is his lab equipment. First of all, it comes with a table to stow it all on. On top of he table can be displayed a syringe with glowing green liquid, a graduated cylinder, a beaker filled with green liquid, an Erlenmeyer flask, a test tube rack with three test tubes, a flat bottomed flask, and a retort mounted on a stand that plugs into the table. These accessories are amazing and might just be worth picking up this figure for. The colors and variety are fantastic. My favorite might be the syringe filled with the green liquid. Re-Animator, anyone? 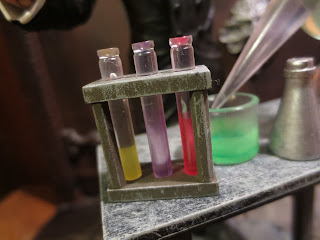 * One of the coolest elements that I have to point out is the test tube rack. Not only is is nicely detailed but the three test tubes are removable! This is truly some of the best lab equipment in an action figure yet! Dr. Jekyll can stand alongside the Sleepy Hollow Ichabod Crane, NECA's Dr. Finkelstein and the Silent Screamers Dr. Jekyll as some of the most well stocked scientists in action figure history. 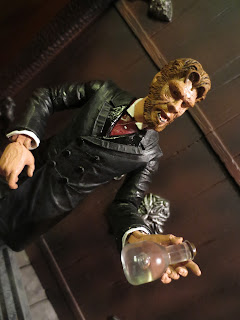 * Dr. Jekyll can turn into Mr. Hyde! Well, kind of. It's really difficult to do, which I'll get to in a minute, but the head sculpt and extra hands look great.  While he seems to get the credit for both roles, Mr. Hyde was not played by Boris Karloff in the film. The character was actually played Eddie Parker, a stuntman who also portrayed the Mummy in Abbott and Costello Meet the Mummy. Mr. Parker had quite a career with almost 300 film roles and over 300 film credits as a stuntman. He was actually the stunt double for Lewis Wilson in the 1943 Batman serial. 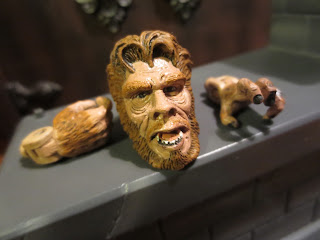 *Here's my biggest problem with this figure: The head and extra heads to transform the good Dr. Jekyll into the brutish Mr. Hyde are incredibly difficult to attach. Swapping the heads took far more force than I was really comfortable using on the figure and swapping the hands just didn't happen. I really was concerned with breaking the hinges on them. Typically you could use a hairdryer or boiling water to loosen these up but that shouldn't be necessary for a newer toy fresh out of the package, should it? 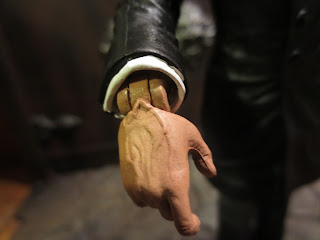 * The hinged wrists on this figure are rather large and kind of ugly. They're somewhat hidden by the coat sleeves of Jekyll and Hyde's jacket but not enough. True ball joints that just plugged into a socket in the sleeves would have been much better (and easier to swap). 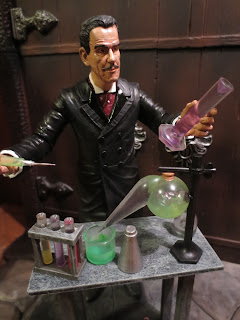 It has been while since I've been so conflicted on reviewing a figure. Dr. Jekyll himself is fantastic and his accessories, lab equipment, and base are absolutely incredible. This figure comes with so many amazing accessories! What disappoints me a bit, though, is how difficult it is to swap the head and hands to turn Jekyll into Hyde. If that weren't a problem then this figure would easily get my highest marks. Still, this is a pretty awesome set. I think in the end I'm still giving this a Great. Diamond Select really offers more bang for your buck than anyone else when it comes to the amount of extras they give you. Even though this figure comes from an Abbott and Costello film versus a typical Universal Monsters release, it's still an incredibly cool piece that will look perfect on your shelf! Boris Karloff fans should really be interested in this piece as it presents a great, basic rendition of the main man himself with plenty of spooky lab equipment. What's not to like?
Posted by Barbecue17 at 10/30/2015