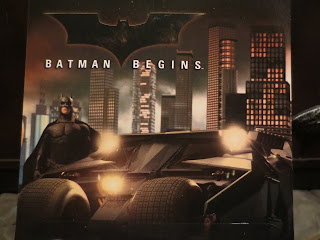 It's time for the third Batmobile in Hot Wheel's Walmart Exclusive Batman series: The Batman Begins Tumbler. That's what it called on the card anyways, but everyone just calls this the Tumbler, so I will to. The Tumbler was a pretty radical departure from previous Batmobiles but it really turned out being an incredible vehicle and inspiring a number of Batmobile designs over the past 10 years since it's release. The Tumbler sculpt was originally released in 2005 and has made a number of appearances over the years in both black and tan. Ready for a closer look? Then join me after the break... 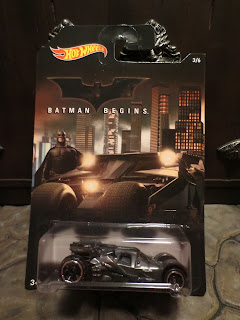 
* The Tumbler looks great (I'm a big fan of the lights on it) and the cityscape definitely conveys the Gotham atmosphere of the film, but I'm not living that Batman. He looks kind of oddly placed. The Batman Begins in the prominent upper left helps to liven things up, though. 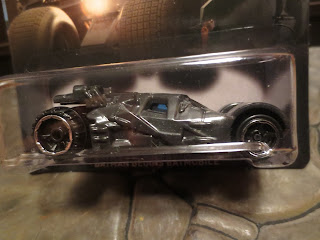 * This is a pretty decent sculpt of the Tumbler. I wish the front were a bit more accurate as the fenders are a bit odd here (the film version doesn't have any). The proportions overall do just seem a bit odd and it's definitely too short (at least 3 inches shorter than the other Batmobiles). Still, it's not bad for a $1. I like that we're getting this one in black again and I'll easily give it a Good and a 1/2 rating.