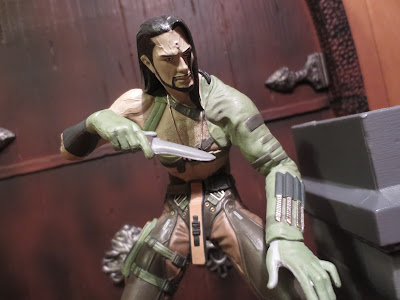 Terror can strike in an ancient castle, in the streets of the large city, or even in the middle of the battlefield. Today, prepare to find a bloodsucking terror amidst a steady stream of bullets...

31 Days of Toy Terror I love to mix things up a bit and show off a number of different figures from a variety of toylines. Today I'm looking at Vamp from Medicom's Ultra Detail Figure: Metal Gear Solid Collection #2.  Released in late 2009 this second series of Medicom's Metal Gear Solid figures feature characters from Metal Gear Solid 3: Snake Eater and Metal Gear Solid 4: Guns of the Patriots. While Vamp first appeared in Metal Gear Solid 2: Sons of Liberty, this figure shows off his MGS4 appearance. So...why does Vamp get a place in 31 Days of Toy Terror? That's easy: He's a vampire. Maybe not literally, but Vamp is a Romanian mercenary/ terrorist who has enhanced physical abilities such as super-strength, the ability to climb walls, and the ability to run across water. He also likes to drink blood and can heal from most injuries. Long story short, Vamp is a knife-throwing genetically enhanced bisexual vampire mercenary. Ready to check him out a bit more? Get it..."bit." Anyways, join me after the break... 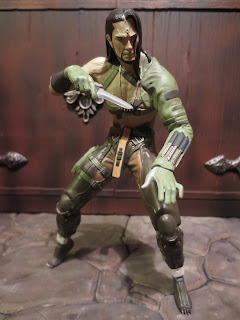 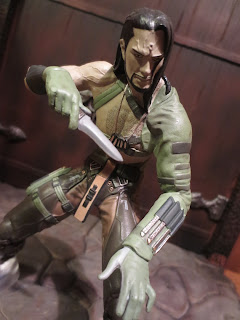 * I'm going to try and not be too hard on this figure but it isn't articulated at all. That's obviously the design of this line, but I'll mention it a bit more later. For now, I will say that I like Vamp's pose. The position of his knife, his arms, and his head definitely captures the look of someone about to enter into a brutal knife fight. This guy is about to mess someone up like Stabby McStabberson! 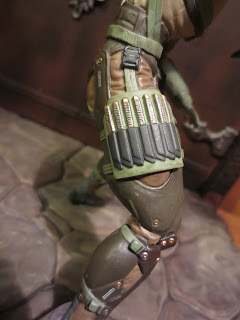 * The sculpt is not incredible (it's a bit soft) but there is some nice detail present on the figure. Medicom captured the "Metal Gear Solid" look: Vamp has molded body armor, lots of tactical gear, straps, and snaps, buckles, and dog tags. He also has some cool little sets of throwing knives on his right hip and left forearm. 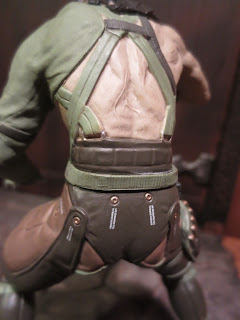 * One of the things I always remember about McFarlane's Metal Gear Solid action figure line was the random white words stamped on the characters' gear. Vamp has those words, too. They look like just a bunch of random letters but they're a cool extra. 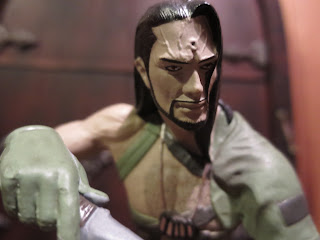 *The sculpt on Vamp is really soft, particularly the head sculpt. He's recognizable but there isn't a lot of definition, particular for a figure who is in the 6 inch scale (Vamp's shorter because he's sculpted in a crouch). 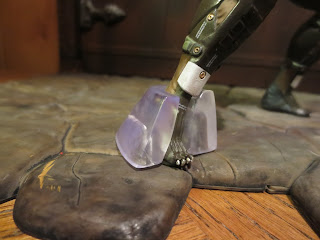 * While you can stand Vamp up on his own he is incredibly prone to tipping over. Medicom included a stand for him but it's little more than a clear plastic piece of plastic that fits around his ankle. If you're making small statues rather than action figures, why not give them cool bases? That's one of my biggest problems with this line: The scale and way these figures are packaged definitely make these seem like lazy action figures rather than nice mini statues. Cool bases would have really helped to improve these. 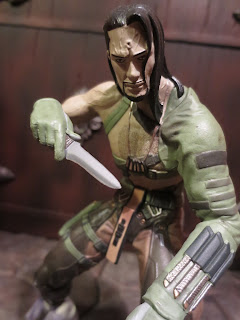 Other than recently playing Metal Gear Solid V: Ground Zeroes via the Xbox One Games with Gold program, I haven't played a Metal Gear game since the special edition of MGS3 (that sounds like I've only skipped one game, but there are many non-numbered games). I was a huge Metal Gear Solid fan, though, and collected the McFarlane figures for both MGS and MGS2 while in high school. McFarlane never made Vamp in the MGS2 line so I bought this guy to stand in. He looks just fine with those figures but it's a shame that we just cannot get Metal Gear figures in a consistent scale and style. Both Metal Gear and Resident Evil are both videogame franchises I love that just can never seem to stick to any consistency s far as scale, style, and even manufacturer. Vamp is decent if you're wanting to fill in a gap but he's not terribly impressive or exciting on his own. I'd give him an Eh and a 1/2. Metal Gear diehards will want him but most action figure collectors will probably just walk on by.

I haven't reviewed much Metal Gear Solid stuff but I did review McFarlane's Psycho Mantis as part of 31 Days of Toy Terror 2013.

I have reviewed some other vampire themed toys, however:

The Lego: Monster Fighters Vampyre Castle
The Mighty Max Rat Trap and Vampyre set
Hordak's a Vampire kind of, right? I reviewed the MOTUC Spirit of Hordak
Dracula was a part of the Playmates Monster Force line
Mattel released a Vampire Batman
Diamond Select's  Van Helsing will help you kill all of these vampires!
Alucard from Castlevania is just Dracula spelled backwards!