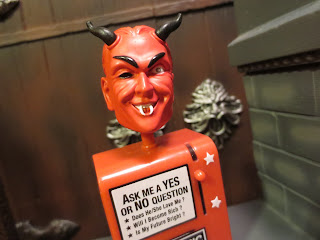 "The hand belongs to Mr. Don S. Carter, male member of a honeymoon team on route across the Ohio countryside toNew York City. In one moment, they will be subjected to a gift most humans never receive in a lifetime. For one penny, they will be able to look into the future. The time is now, the place is a little diner in Ridgeview, Ohio, and what this young couple doesn't realize is that this town happens to lie on the outskirts of the Twilight Zone."

Today for 31 Days of Toy Terror I'm looking at something rather cool: A Mystic Seer Monitor Mate from Bif Bang Pow! Based on the Mystic Seer from the second season The Twilight Zone "Nick of Time" (written by the late, great Richard Matheson), now you can have a small Mystic Seer of your own to answer your questions about the future! Just like another Matheson penned episode, "Nightmare at 20,000 Feet," William Shatner also starred in "Nick of Time" as an obsessive man trying to rationalize his experiences to his wife. In the episode, the Mystic Seer is a penny operated machine located at a booth in a diner that answers questions with a positive or negative response. The Mystic Seer is a popular prop and has appeared in a variety of sizes. This version is quite a bit smaller than the actual prop and is instead designed to sit on top of a computer monitor. I actually bought it hoping that I could use it as a slightly over-sized companion to the Twilight Zone retro-action figures. Ready for a closer look at the Mystic Seer? Load up your penny and join me after the break... 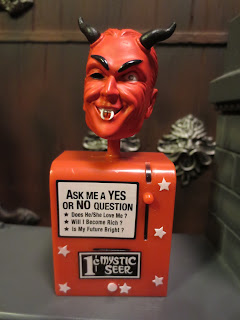 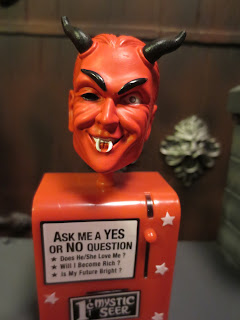 *While the proportions are a little off (the Mystic Seer in the show had a smaller head and a larger body) it really does look quite nice and is instantly recognizable. The headsculpt of the Seer itself is very creepy. He kind of reminds me of Goat Man from Masters of the Universe. The body itself has the stars, sign, and even the little napkin dispenser on the left side. 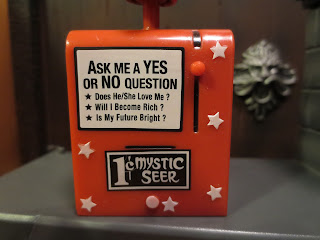 *This isn't an enormous piece, so it's quite welcome how clear and legible the text is on the little sign. I would have liked to have seen a dot of silver paint on the bottom where the key hole is to collect the pennies but otherwise this is quite well done. 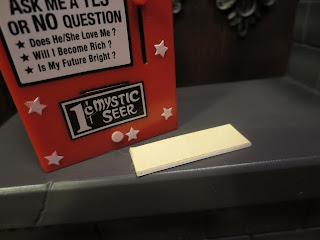 * What's nice about the Mystic Seer coming with a piece of double sided tape is that you have options on how to attach it to your monitor or even the option to just display it on its own. I personally like it as just a miniature prop replica to stand alongside the retro action figures that came out last year. It'd also go really well with 1/6th scale figures. 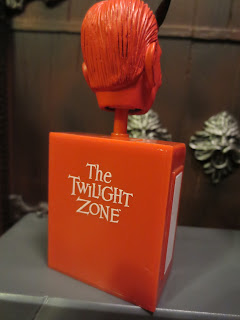 * The plastic on the base body feels a little flimsy. The body itself doesn't concern me too much but the rod that holds the head on seems like it should be a bit sturdier.

I'm also not a huge fan of the giant "The Twilight Zone" logo on the back, either. I guess that the majority of time when the piece is displayed that it would be out of view, but it still seems unnecessary. 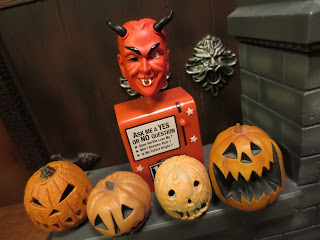 This turned out to be a cool little doodad. This was another item I purchased on sale from Entertainment Earth back in August and I paid about $6 for it. Seriously, I'm just displaying it alongside my ReAction figures and I really like how it looks with them. It's not in scale, necessarily, but it still somehow works. This is a Good and a 1/2 item. If you're a Twilight Zone fan and you like "Nick of Time," I can't see how you could go wrong. Of course, Bif Bang Pow! has released some more expensive full size replicas (typically around $250) for the die-hards, but casual fans should be content with this!

I reviewed a few other Twilight Zone items last year: