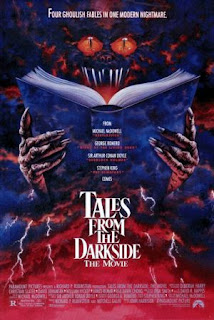 To expand his ever growing body of knowledge, Barbecue17 enrolled in a film appreciation class at his local college. He is posting copies of his class assignments pass the knowledge on to you.Movie Thoughts by Barbecue17
The movie I watched: Tales from the Darkside: The Movie
It was directed by: John Harrison
It was released in: 1990

Please briefly summarize the plot: Based off of the anthology TV series created by George Romero, Tales from the Darkside: The Movie is an anthology horror film. The overarching story is about a a young boy telling a witch three horror stories from a book in order to keep her from eating him. The three stories are about a graduate student getting revenge on some fellow students by using an ancient mummy, an assassin hired to kill a homicidal cat, and a man whose life is changed when he meets the love of his life and a killer gargoyle on the same night.

How is this film culturally/ historically significant? It features a number of actors who would go on to bigger roles such as Julianne Moore, Steve Buscemi, and Christian Slater. It also delivers some thoughtful commentary on animal welfare in regards to laboratory research in big pharmaceutical through the segment "Cat from Hell."

What genre would you place this film in? Horror/ Anthology/ Mummies, Gargoyles, and Evil cats.

How did this film make you feel: Incredibly entertained. This is one of those horror movies that simply relishes in how crazy and entertaining it is. While you might have a few moments of suspense and surprise, you'll certainly be repulsed at times and you will definitely laugh. Sometimes you'll do all three things at the same time.

What were the most impactful moments of the film? There's a part in "Cat from Hell" where the evil cat forces itself down a man's throat, killing him, and then the cat waits around until someone else shows up to pop out of the body in order to kill them, too. Oh, and there's also a scene in Lover's Vow where an artist named Preston breaks his vow with a killer girlfriend and ends up losing his wife, his children, and everything he has worked so hard for. He also gets killed by a gargoyle.

With what other movies would you compare this film? Other anthology films like Creepshow and Twilight Zone: The Movie definitely will come to mind. The first story about the mummy, "Lot 249," kind of reminded me of Reanimator.

What stands out about this film? The mixture of humor, gore, and horror is excellent. Also, "Cat from Hell" is incredible. Watching this one and deciding if you're rooting for the assassin or the cat definitely tells you a lot about yourself. The performances are overall quite good. I love William Hickey as the millionaire Drogan who really wants the cat dead. The scenes between Christian Slater and Steve Buscemi in "Lot 249" are also really fun. Steve Buscemi has some great lines.

What message do you believe the filmmaker was trying to convey? Don't ever commit academic fraud or try to frame someone who can read hieroglyphics and really likes mummies, don't experiment on animals, and always keep your promise to a gargoyle. Also, reading is a valuable skill and it can save you from witches.