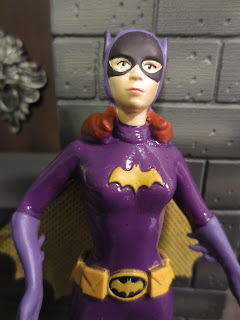 When the rights and licensing issues with the 1966 Batman TV series were worked out a few years back companies were racing to be the first to put out merchandise based on Adam West's and Burt Ward's depictions of the Dynamic Duo and their gallery of fiendish foes. Oddly enough, however, the initial licensing issues resolved did not involve the likeness rights for Yvonne Craig's portrayal of Batgirl. Fortunately, those were resolved in September of 2013 and now we're beginning to see a variety of products featuring Ms. Craig's portrayal of the Dominoed Daredoll. Diamond Select, Tweeterhead, and Tonner all have high end collectible dolls and statues coming out over the next 6-8 months while Mattel has an SDCC exclusive Batgirl figure hitting this week. Prior to this figure, the only new Batgirl collectible from the 1966 series I own is the plush Batgirl from Bleacher Creature, so it's kind of exciting to add another to the collection! I first found about this line when a friend bought me Batman for Christmas. I had hoped that they would produce Batgirl and, sure enough, they did! Ready for a closer look? Then join me after the break... 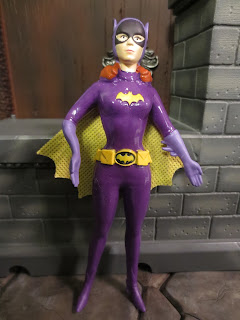 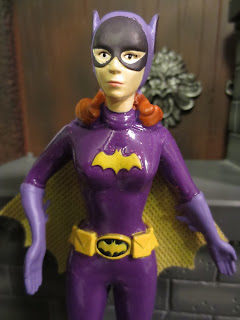 
*Bendable figures are a strange beast as they traditionally tend to be novelty items or dollar store styled toys. While the likeness isn't perfect, this is not a bad likeness for a bendable figure. It may not specifically be Yvonne Craig but it's definitely the 1966 Batgirl. The body sculpt, particularly the work on the belt, isn't bad, either. It's a soft sculpt but it's instantly recognizable. 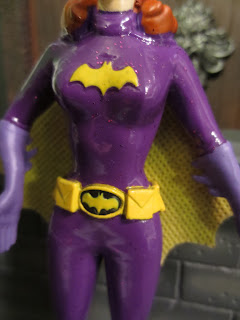 * My favorite thing about the figure is that NJ Croce seems to have mixed in glitter with the rubber to give Batgirl's outfit that shiny, shimmering look. It's really quite fantastic, particularly for a bendable toy. The paintwork isn't half bad, either, but that glitter bodysuit just makes this figure truly pop! 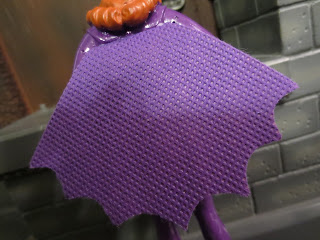 *Batgirl has a cape that's made from a bizarre material. I liked it on the Batman figure but I'm not so sure about it here. It's odd and I can't quite put my finger on what it reminds me of. It is purple on one side and yellow on the other, however, so that's nice. I just wish they'd used a more traditional fabric. 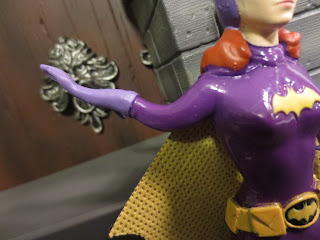 *Batgirl feels very solid and sturdy but this is at the expense of her not being very bendable. I had this same problem with Batman last year. It feels to me more like the bendy nature of the figure is more of a kitschy novelty factor rather than an actual play factor. I just could not get Barbara here to hold any poses. 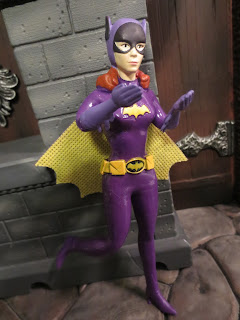 To the right is the best pose I could get Batgirl to take, which for some reason reminds me of Howard Moon's rendition of Cornish Guilt from The Mighty Boosh. While this is a decently sculpted figure it's just not as functional as  imagine a bendy figure to be. Of course, that would have made the proportions strange, so maybe it's a fair trade off? Anyways, I'm giving Batgirl here an Eh and a 1/2 rating. She's not a necessary addition to your collection but if you're a Batgirl fan or a collector of merchandise from the 1966 television show you might want to track her down.


I've also reviewed Batman from this same series and a number of figures from Mattel's 1966 toyline:
Batman
Catwoman
The Joker
The Penguin
The Riddler
Surf's Up Batman