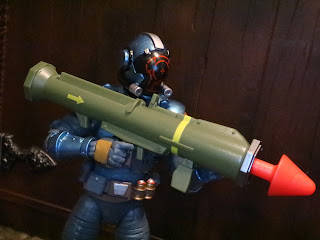 I've reviewed quite a few Fortnite: Legendary Series figures from Jazwares on the site but today I'm checking out something a little different: The first of the Legendary Loadout accessory sets! While the 4 inch Fortnite figures from Jazwares have long had accessory sets only this year have the 6-inch figures gotten any extra armaments. Of course, the 6-inch figures come loaded with accessories, unlike most of the 4 inch figures. Still, it's a cool idea. The odd thing is that, thus far, the Legendary Loadout sets have not been released in the United States. I got mine through a Canadian seller and my guess is you might have to do the same too, unless you're in Canada or the UK. The first set features four weapons for the Fortnite crew to use: A Pump Shotgun, a Light Machine Gun, a Guided Missile Launcher, and a Minigun. Three of these weapons have already appeared in the Legendary Series already but here they actually each have an action feature of sorts. In fact, all of the weapons do, so they're more complex than the standard accessories. Are they worth picking up? Let's find out after the break... 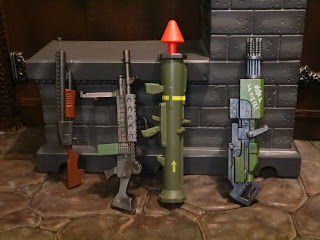 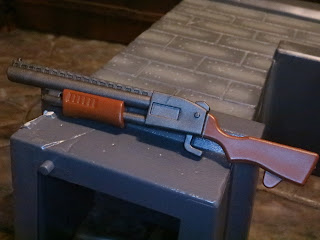 * The Pump Shotgun has been released previously with a few figures (Doggo, Peely, and Rust Lord) but this one actually has a working fore-end. It slides back and forth so you can rack a new shell in place. The sculpt is as detailed as the previous pump shotguns though the tip on the stock where you could place a string to make a sling is missing on this model. 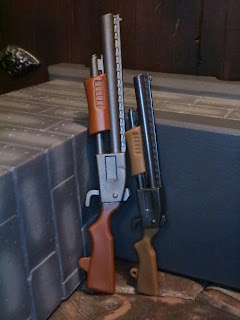 * This Pump Shotgun is a lot larger than the previous release. It's definitely up-sized and could possibly be used with slightly larger toylines if you felt the need. 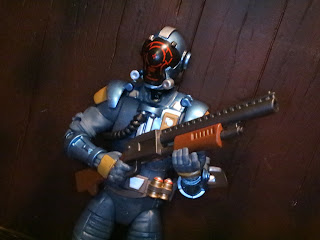 * It still looks good scale-wise with the Fortnite: Legendary Series figures though the fore-end is oversized and doesn't really fit in their hands. That's kind of a bummer, isn't it? 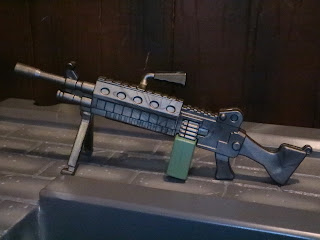 * Let's check out the Light Machine Gun next. The Fortnite accessories have a design aesthetic that captures the look of real world weapons but renders them in a slightly cartooish style. I've long said that they remind me of the in-game models of the weapons from GoldenEye 007 on Nintendo 64. That's a good thing, by the way. I'm still nostalgic for that game. 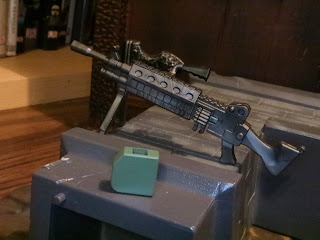 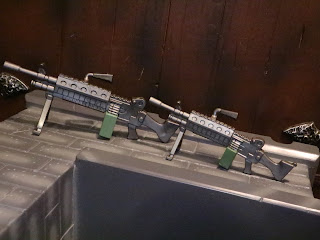 * This version of the Light Machine Gun is large than the one that P-1000 came with recently (his also didn't have a removable magazine). I wonder why Jazwares didn't just give him this same gun rather than making two different molds? 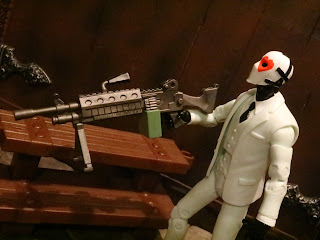 * Like the Pump Shotgun this gun looks OK with the figures, but it has a problem. The handle is too large, so they really can't hold the Light Machine Gun well at all. 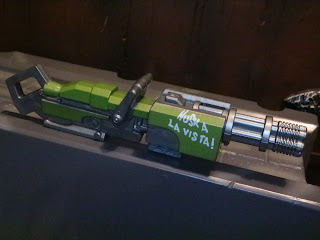 Minigun:
* The Minigun is pretty cool. It has a great sculpt with a lot of detail (including paint applications) and "Husk A La Vista" written on the side. The barrel also rotates when you turn it. 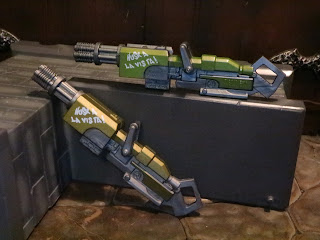 * Doggo came with this weapon recently, though his version (the one on the bottom) doesn't have a rotating barrel and has more of a gold-green body. They're the same size, though, so the figures can actually use them quite well. 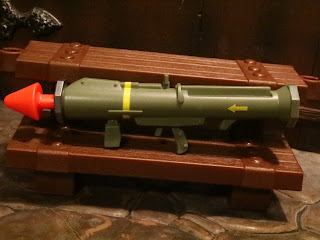 * Last up is the Guided Missile Launcher. This is a fairly standard looking action figure missile launcher but it does fit well with the figures and has some cool paint applications to give it a bit more character. It reminds me of one of the missile launchers from Trendmasters' Independence Day line due to the design and the colors. 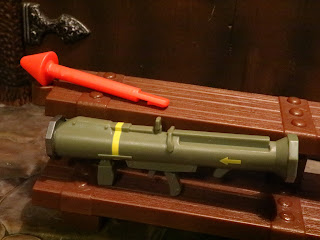 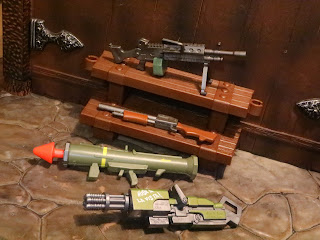 This set does come with four more complex accessories for the Jazwares Fortnite: Legendary Series line, but only two of them are really useful. The Pump Shotgun and Light Machine Gun are just too large to be useful to the figures they're intended for. The Minigun is cool, though a bit redundant, leaving the Guided Missile Launcher as the winner of this set. It's a novel idea and if these are easily available to you and inexpensive I could see them being tempting. For what you get, though, and factoring in the oversized weapons, this set really gets an Eh and a 1/2. Unless you have dedicated plans for these (maybe using them with another toyline) these could be easily skipped.