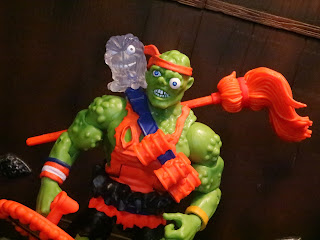 Apparently in a contest to see who can bring back the craziest vintage toy line yet Super7 ups the ante with Toxic Crusaders Ultimates. Yes, the Toxic Crusaders. Remember the environmentally woke 1991 animated series and accompanying Playmates toyline which were inspired by the extremely violent 1984 film The Toxic Avenger and it's sequels? Yup. Super7 has resurrected that property. They've actually made ReAction and Keshi Surprise figures, too, but it was the Masters of the Universe Classics and Teenage Mutant Ninja Turtles Ultimates scaled Toxie that won me over.  While I didn't see The Toxic Avenger until I was in my 20s, I loved the Toxic Crusaders as a kid. I even had Toxic Crusaders shoes as a kid. While I haven't heard if they're planning to put our more characters than just Toxie in this line, Toxie was enough to get me excited as he's such a fantastic looking figure and he'll fit in well with the other lines I mentioned. Ready for a look at Tromaville's favorite son? Then join me after the break... 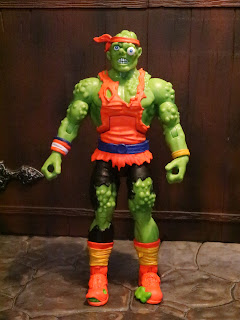 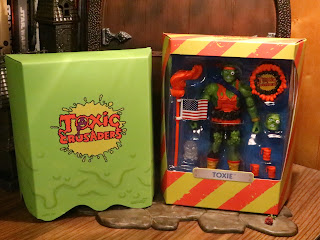 Packaging:
* Like most of their other Ultimates releases Toxie comes in a window box with a removable slipcover. The packaging is bright and really eye catching. While it's not 100% collector friendly (there are ties and bands keeping the figure and accessories in place) it's pretty attractive and can be reused. 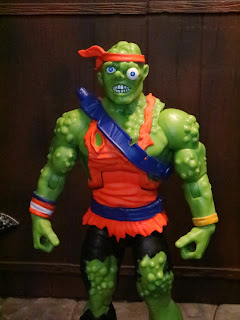 The Positives:
* Like MOTUC and the TMNT Ultimates, Toxie is a large, colorful, bold figure. He's not photo realistic or something you'd consider a statue or display piece; he's simply an awesome modern translation of a toy you owned as a kid. Toxie's mutant skin is green and covered with bulges while the tutu he still wears is ripped and worn to show the wear and tear Toxie has put it through. He's sporting sweatbands, too, one of which is red, white, and blue. Toxie is a model American patriot through and through! This is a fantastic looking action figure. 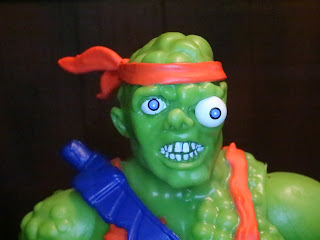 *  Toxie's headsculpt is awesome, too! His left eyeball is falling out, he's got a an odd expression on his face, and he's wearing his Rambo like headband. This is the way he looked on the vintage toy and in the Toxic Crusaders cartoon most of the time, including most of the promotional materials for the toy line and various tie in items. 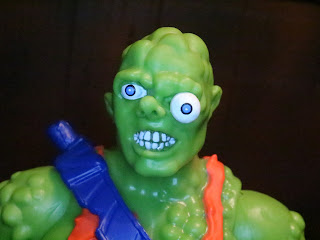 * Toxie's second headsculpt features him without his headband which is a truer look to the character in the Toxic Avenger films and a way he appeared sometimes in the Toxic Crusaders cartoon as well. It's a nice inclusion and while I wouldn't have missed it if it wasn't included it does give you another display option for your figure.
* 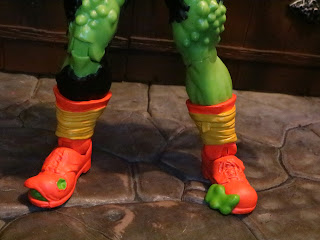 * Toxie's footwear isn't in the best of shape. His right show is split open, revealing his deformed toes, while his left boot is actively leaking toxic waste. The sculpt looks fantastic and those colors just scream the early 1990's. 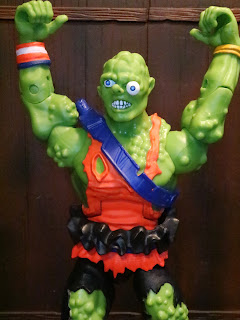 Toxie is sporting the ruffles of his tutu! This is a separate removable piece that can easily be taken on or off, depending on how you want to display him. The vintage toy did not have the ruffles but the cartoon version of Toxie did. Super7 did a great job of giving fans a few options to change up Toxie's look. 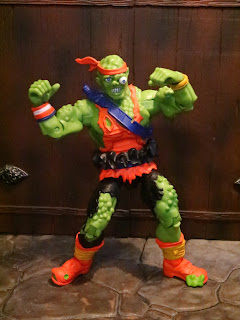 The articulation is excellent on Toxie and is very much what you probably expect from Super7's Ultimates as he's built like other figures in that range and a later Masters of the Universe Classics figure. He is super durable, too. Super7 has steadily increased the quality of their offerings and Toxie is quite possibly the best quality figure that I've purchased from them yet. 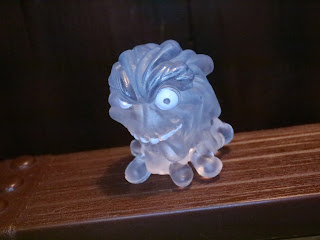 * While Toxie is so far the only character released in Super7's Toxic Crusaders line he's not fighting alone! He comes with Blobbie, his little radioactive sidekick. Blobbie is a simple minifigure molded in clear plastic. He does have some paint applications, though. They're on his eyes and teeth. He's a creepy, cool little guy. Kind of reminds me of one of the Un-Men from Swamp Thing. 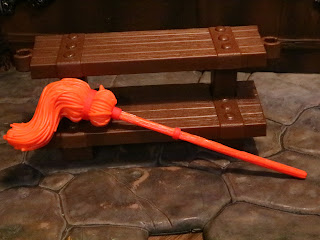 * Like Stanley Spadowski, Toxie's primary weapon is a mop. Like the vintage toy, this Toxie's mop is orange (though it now has some red bands on it, too). It's a great sculpt so far as mops go. If you wanted to have a mop that was more "real world" colors and not accurate to the vintage toy, you could always track down the Playmates TMNT Classic Collection Donatello from The Secret of the Ooze. 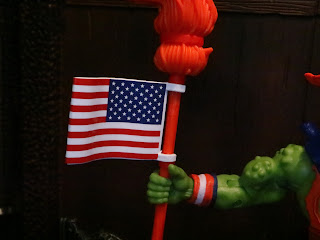 * The vintage Toxie has a sticker of an American flag on his mop. Super7 does one better by making this a clip on plastic piece that you can attach to Toxie's mop at any time. Cool. 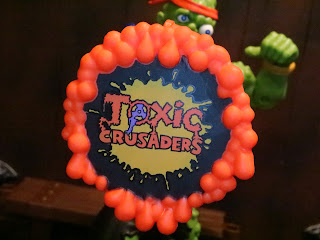 * To protect against the attacks of his foes Toxie proudly carries a shield bearing the logo of the Toxic Crusaders. The edges look like slime or melted metal or something while the handle is a discarded pipe, just like the vintage toy. 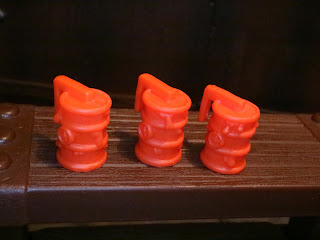 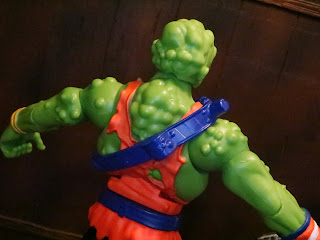 * Toxie's bandolier is excellent! He can carry all of his accessories! The mop fits in the loop on his back, Blobbie can ride on his shoulder (plug him onto the peg), and the three grenades fits into notches along the front. Just have him tote his shield and you're all set! 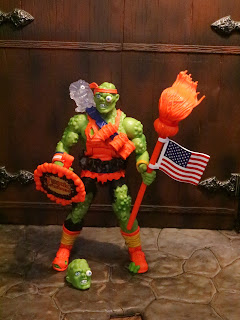 Toxie is without a doubt one of my favorite figures from 2020. He's such a well made toy and he really gives off the same over the top vibe of the original figure but bigger and better. Like the best of the Masters of the Universe Classics line Toxie reminds you of why you love toys in the first place and why you loved them so much as a kid. With a few alternate looks, multiple accessories, and a cool little companion figure Toxie is a confirmed Epic toy. Super7 is on a role this year and they're easily one of my favorite companies putting out toys. If you're a fan there is also a glow-in-the-dark Toxie but, in my opinion, this is the guy to grab. Unfortunately he's sold out now (he was offered as a preorder last year) so if you want him now it might cost you a bit. I'd love to see more figures in this line, though. The vintage line only had nine figures, so that would be pretty easy to out out. Especially if Super7 did two sets of four figure, like they're doing with TMNT and Thundercars. This guy is a winner and is a shoe-in for my Top Ten Individual Toys of 2020 list.

This is my first review of a toy based on Toxie.