The Dawn of 31 Days of Toy Terror: Freddy from Movie Maniacs by McFarlane Toys 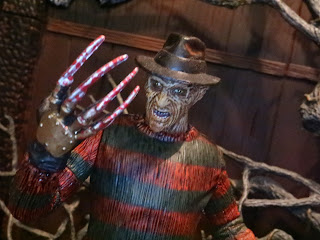 If you want to put a decisive mark on where modern horror toys begin I would say place it in September of 1998 with the release of McFarlane Toys' Movie Maniacs. While there had been plenty of action figures based on R-rated films those were typically sanitized and intended for kids. Movie Maniacs was a toy line based on hard R-Rated properties that wasn't intended for kids in any way. Measuring in at 7 inches, they were larger than most "collector focused" action figures that came before. They also actually had bloody paint applications (including some extra bloody paint variants), not hiding their horror movie roots. Lastly, Movie Maniacs was unique in that it encompassed characters from multiple properties under one banner. The line was innovative and definitely further helped differentiate what McFarlane was doing from what everyone else was doing. The first series, released in September of 1998, included Jason Voorhees from Friday the 13th, Leatherface from The Texas Chainsaw Massacre, Patrick and Eve from Species 2, and Freddy Krueger, who was just listed as Freddy on the packaging. That's how popular Freddy is; just say his first name. Like Madonna, Cher, or Elvis. I didn't collect the first series of Move Maniacs as as the time of their release I had never seen any of the films these characters hailed from. I picked up my Freddy maybe 10-12 years ago or so to add to my horror collection. While today you can go to Target (and sometimes even Walmart) and find multiple Freddy Krueger and Jason Voorhees figures from NECA, making these guys as toys was kind of taboo at the time. Matchbox has attempted to put out Freddy Krueger based toys around 1989 but it ended disastrously with parents groups protesting and Matchbox bringing the toys to an end. McFarlane went full speed ahead, though, not in any way acknowledging that this was a toy for kids. And it worked. Let's take a look at a figure from a toyline that revolutionized action figure collecting after the break... 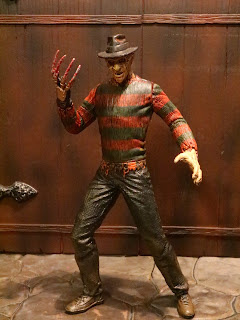 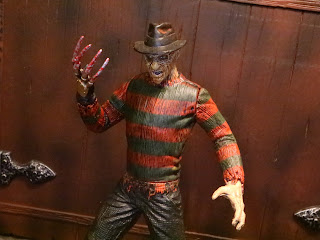 * Look at Freddy compared to nearly every other figure I've reviewed for The Dawn of 31 Days of Toy Terror this year and you can see the difference. He doesn't look "toyish" at all. Yeah, the propertions might be a bit off compared to today's figures but the level of detail on this guy and the grimy, worn look of his paintwork is something different. I started collecting Movie Maniacs in 2000 as a teenager and, even then, he felt like something I shouldn't have. He feels dangerous! 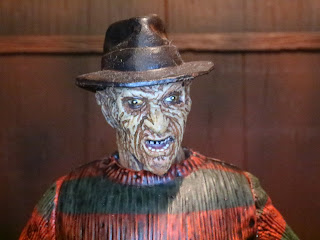 * While NECA has continued to redo and improve on everything Mcfarlane did in the late 1990s and early 2000s, this is still a pretty strong headsculpt that captures Freddy's creepy appearance. The teeth, the eyes, and the burned skin are all present and gruesomely rendered. This is McFarlane in 1994. Freddy is what they were producing 4 years later. That's a huge leap! 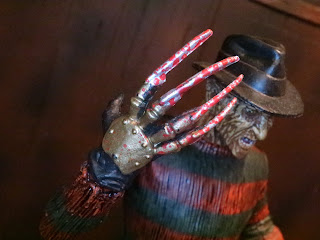 * Freddy's claw looks fantastic. Rather than being a straight up interpretation of Freddy from one film McFarlane captured a general impression of Freddy from across most of the earlier films. If you saw someone in an incredible Freddy Krueger costume from a haunted house, this is what you would expect to see. The blood paintwork on these toys is still really nice and holds up well. 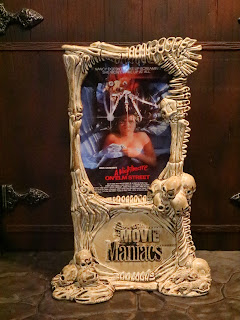 * Each Movie Maniac came with a plastic display that held a cardboard movie poster. While this Freddy seems more influenced by Part 3: The Dream Warriors (the best A Nightmare on Elm Street film) the poster is from the original movie. The sculpt on the bones and skulls of the poster frame is excellent with a great dark paint wash to bring out all of the gruesome detail. The poster is juts cardboard and is glued to the frame. By giving each figure a piece like this it really hammered home that the idea was that these figures were made to be displayed and admired, not really intended for traditional play. 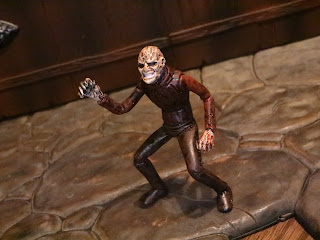 * Freddy comes packaged with the evil Freddy marionette from Dream Warriors, too. It's a neat little minifigure with lots of great paintwork and a creepy appearance. Little puppets are always creepy, though, aren't they? 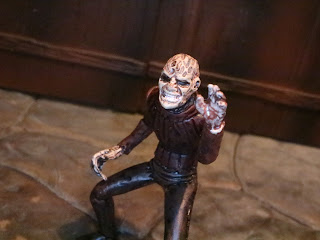 * He's even got articulated shoulders! They swivel so you can raise and lowers his arms. 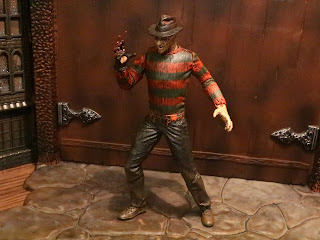 * While pre posed figures weren't a new thing in 1998 by any means, McFarlane Toys really pre-posed the Movie Maniacs in a way that was fitting for the characters, intending them to look good on display. Freddy is just a statue from the waist down but the pose is very fitting and looks quite nice on display, especially when paired with the included movie poster. 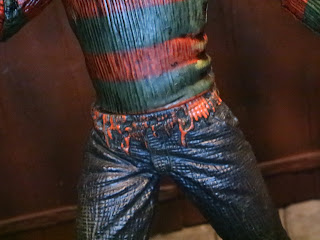 * Freddy's sweater looks pretty good on his torso, and the frayed bottom of the sweater looks quite impressive, but together? These two parts of the sculpt just don't blend. It always has kind of stood out to me like a sore thumb. 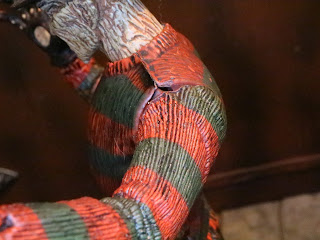 * Freddy does have some articulation but it's quite weak. Honestly, the articulation on the arms and waist feel more like it's there simply to make the molding of the pieces easier as it feels quite "sticky" as if it isn't even really intended to be moved. 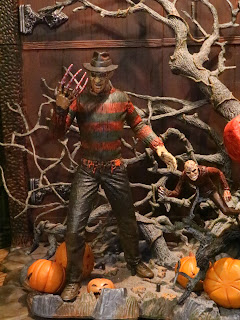 While Freddy is part of what I believe is one of the most influential toylines ever, he himself is not an incredibly grand action figure. He's a Good and a 1/2 figure and a solid display piece, particularly considering when he came out, but he does have some weird design features like slightly off proportions, the weird sweater edge at the bottom, and the awkward articulation definitely render him as a piece from an age gone by that has been surpassed by the many Freddy Krueger figures made by NECA, Mezco, and others. I still remember seeing Freddy and Jason on the cover of ToyFare magazine back in early 1998 and being so impressed with these. Move Maniacs definitely helped usher in a new era of toy collecting. If you're a hardcore A Nightmare on Elm Street fan or collector share with us your thoughts and memories about this figure! It'd be interesting to hear your thoughts on this.