The Dawn of 31 Days of Toy Terror: Shriek from Skeleton Warriors by Playmates 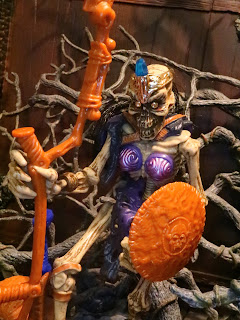 Today's installment for The Dawn of 31 Days of Toy Terror is a real bone chiller! We're taking a look at Shriek, the Evil Temptress of the Skeleton Legion, from Skeleton Warriors. Released in 1994 by Playmates, Skeleton Warriors was a small line of action figures based on the cartoon of the same name created by Gary Goddard (of Masters of the Universe movie fame). It didn't last long (OAFE wrote a great piece speculating why) and an attempted revival by October Toys five or six years ago didn't really pan out, either. Skeleton Warriors just feels like it should be a real hit but it seems to never get a fair shake. Maybe someone like Super7 or NECA could give it the boost and toyline it really deserves? Anyways, let's get back to Shriek and the Skeleton Warriors. Shriek was one of the few figures I had from this line as a kid (I also had Aracula, Grimskull, and the Skullcycle) and I remember being very impressed by her. The sculpting on this line was truly ahead of its time and while Todd McFarlane's Spawn line is remembered as being the line that revolutionized action figures, bringing up darker subject matter and gearing them towards adult collectors, Playmates definitely was definitely part of the trend with Skeleton Warriors. Let's take a look at the horrifically wonderful Shriek after the break... 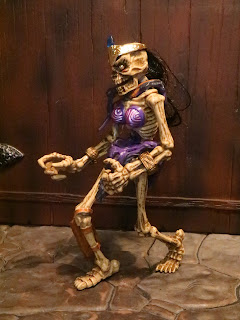 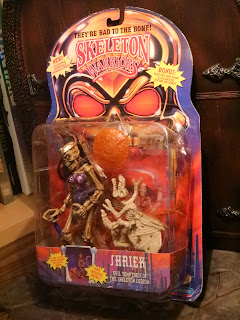 * The Skeleton Warriors don't tend to be terribly rare or very pricey, so I took a picture of the packaged sample before opening it. The cards are very reminiscent of other Playmates lines as they have colorful graphics, detailed pictures of the accessories (showing them fully painted rather than just molded in solid colors), and lots of pun filled details about the characters. These definitely look far edgier than your average toy aisle fare from the early 1990s, don't they? 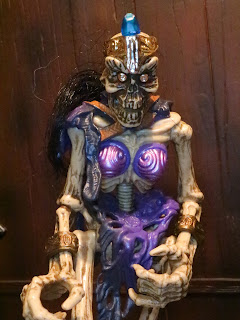 * Shriek is hideous and fantastically sculpted. I'm not sure a better skeleton action figure existed before this line. Look at the detail on her bones! Shriek is truly sculpted to look like a skeleton with a fantastic paint wash to bring out all of the detail from her bones. Her outfit is just remnants of what she previously wore a rotted purple loincloth, shoulder straps, and some armored breast cups. The evil characters were transformed into skeletons, so prior to this Shriek was supposed to be an incredibly beautiful woman adorned with fancy items such as the bracelets that still sit over her bony wrists. This is some A-plus work on Playmates part for sure. 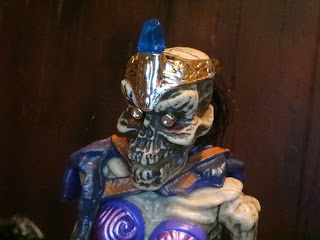 * The headsculpt is amazing. Not only does Shriek look gruesome but she has vac-metal gold eyes and a tiara which holds a fragment of the Lightstar Crystal. 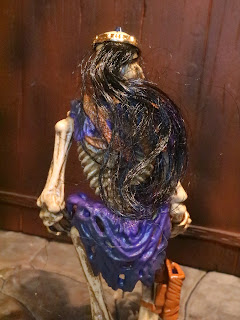 * Shriek also has rooted hair! What a creepy feature, right? This wasn't the first figure I owned with rooted hair as a kid (My first were probably Jessica and Futura from Filmation's Ghostbsuters) but it was still enough of an oddity in a boys toyline to seem quite unique. 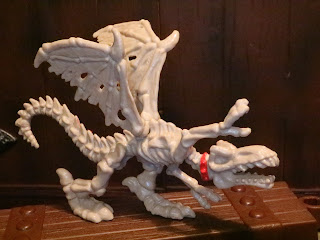 * Shriek comes with a companion: Crossbone, the Skeleton Dragon! This is a cool little dragon buddy who is Shriek's pet. He's even wearing a collar! Again, the sculpting is excellent. There's not a lot of paintwork here but the off-white plastic Crossbone is molded in looks fantastic on its own. 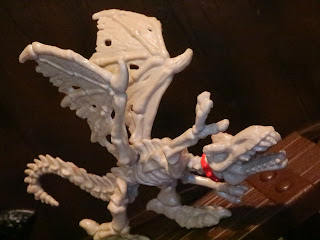 * This little guy even has articulated wings! The wings can swivel forward and backward, giving Crossbone even more play value. He's a great little minifigure for sure. 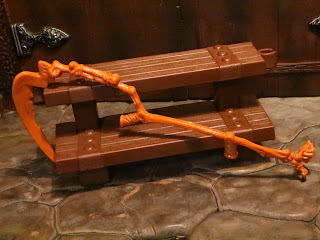 * Shriek's primary weapon is her Bone Bloodscythe. The back of the packaging shows the weapon fully painted (Playmates did that often for some reason) but here it's simply molded in brown plastic. It's quite cool, though. The bottom of the scythe looks like it is made of a skeletal hand while the shaft is composed of various bones. The blade itself is rather wicked and worn, too. 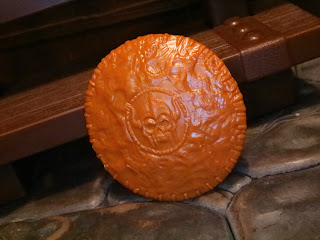 * To give her some defensive abilities Shriek comes with a shield. This isn't mentioned on the packaging, so maybe it's a surprise weapon? It looks like a leather shield with the Skeleton legion logo on the front. There's a clip on the back so it can clip over Shriek's forearm or she can hold it in her left hand. 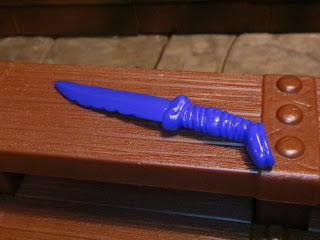 * Shriek's final weapon is the Skeletal Stiletto, a blue knife with a wicked sharp blade. 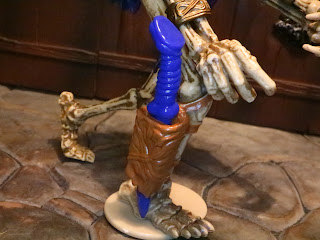 * You know what';s really cool? Shriek can actually carry the Skeletal Stiletto in a sheathe on her leg. How cool? That was a pretty advanced feature for 1994. You didn't see a lot of stuff like that back then on figures in this scale. 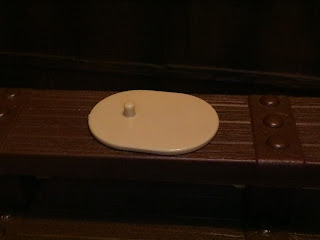 * Shriek also comes with a small plastic stand to keep her standing upright. It's simple and basic but it works and is fairly necessary, as she has trouble standing up on her own. 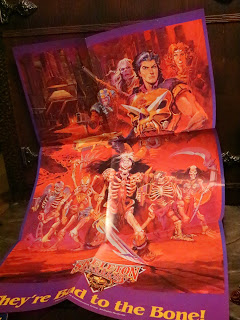 * Each figure in the series came with a cool poster featuring the Skeleton Legion and the Legion of Light. Flip it over and there is a minicomic on the other side. 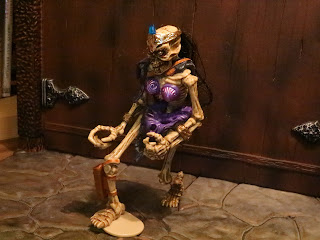 * Playmates often sculpted figures in a hunched battle stance (think Teenage Mutant Ninja Turtles) and most of the skeletons in the line were designed like this. Shriek is so hunched over that she requires the stand to stay upright. It's an odd pose and definitely makes her more difficult to play with. She looks so cool but I wish she was in a more neutral pose. 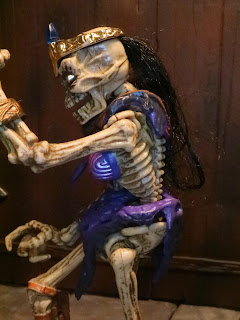 * Take a look at Shriek from the side and you'll see that her neck is curved down, her spine is curved forward, and her pelvis is... well, at a really weird angle. What the heck? There's definitely something off about her, isn't there? What is going on with her waist? 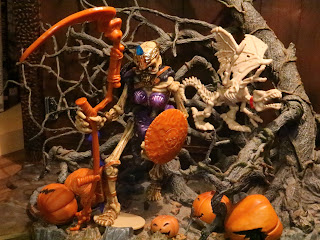 Skeleton Warriors definitely feels like a toyline that probably would have been wildly successful had it come out a few years later. The sculpts were incredible, the accessories plentiful, and there were just some incredible designs. Shriek is an Epic figure and definitely a good representative of one of the best horror toylines of the 1990s. It's a shame there isn't more love for the Skeleton Warriors and it's a shame the proposed second series never happened, as there were some incredible things planned. Were you a fan of the Skeleton Warriors? Who was your favorite?

This is the first figure of Shriek I've reviewed on Action Figure Barbecue.