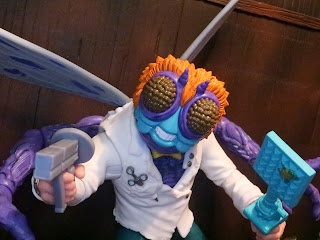 Who's ready to start checking out the first series of Super7's Teenagt Mutant Ninja Turtles Ultimates action figures? I offered up a review of the exclusive Glow-in-the-Dark Baxter Stockman about a month ago but now it's time to delve into the first series of figures themselves. When Super7 took over production of Masters of the Universe Classics in 2017 they really began to up the work they were doing previously. Mostly known for keshi, Japanese vinyl toys, and ReAction figures, adding 6-7 inch scaled fully articulated action figures to their repertoire was a huge leap forward. While they sadly no longer have the MOTU license, Super7 has been moving forward with a long string of action figures in the same scale and style of MOTUC under the "Ultimates" range. With the Thundercats, Toxic Crusaders, Conan the Barbarian, and now Teenage Mutant Ninja Turtles, Super7 is intent on recreating our childhood toy boxes in a bigger, better scale. Today I'm checking out the standard version of Baxter Stockman who, like the rest of Super7's TMNT Ultimates, is based on the vintage toys rather than any other piece of media. Originally release in the second series of action figures in 1989 Baxter Stockman is absolutely a well known figure from the vintage line. Appearing in the original cartoon series and adding another villain to Shredder's minions it seemed like most folks had Baxter. Super7 has done an excellent job of recreating him here with modern articulation and a larger size so he can mix in with other nostalgia themed toylines. Let's take a look at Baxter Stockman after the break... 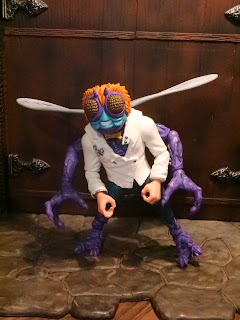 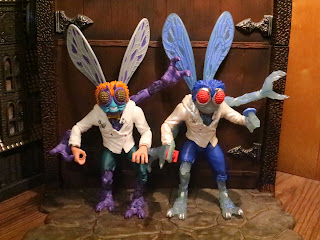 Comparison:
* The standard series 1 Baxter Stockman is on the left while the Glow-in-the-Dark exclusive Baxter Stockman is on the right.  Both figures share the same mold and same accessories but the standard Baxter has more paint applications and is more accurate to the vintage toy. The Glow-in-the-Dark Baxter is quite cool, though, so he's worth checking out if you're a fan. 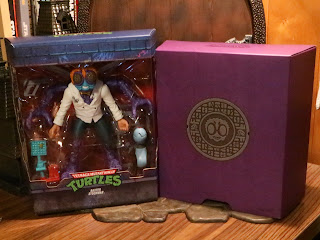 The Packaging:
*  Super7 consistently has some of the nicest packaging in the action figure industry and this continues with the TMNT Ultimates line. Each figure comes in a window box with a cardboard sleeve over it. The villains get purple adorned with a manhole cover with their face on top. There are actually little mousers on the side as well, which is pretty cool. Inside is a window box. It's not truly collector friendly packaging but you don't have to really destroy anything to get the figure out. 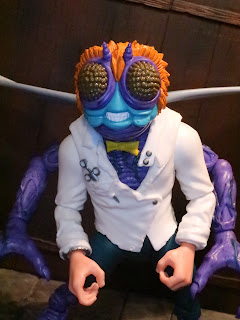 The Positives:
* Here's Baxter! Based on the vintage toy of Baxter Stockman Super7 delivered an incredible update of the original figure. Baxter is a weird mixture of human elements (human hands, wearing a lab coat and bowtie ) and fly elements, which gives him the charming appearance of a laboratory experiment gone awry. The Four Horsemen are involved with this line and, like with Masters of the Universe Classics, the design aesthetic is to make a figure that "feels" like what you had as a kid. I'd say in that respect that Baxter Stockman is very successful. 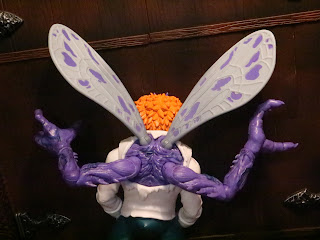 *  Like the vintage toy Baxter has two massive clawed arms and wings springing out of his back. You can see where his lab coat was ripped apart, too. Unlike the vintage figure, the arms and wings don't fall off. They're a permanent part of the figure now. Man, those vintage wings and claws were a pain to keep in place weren't they? 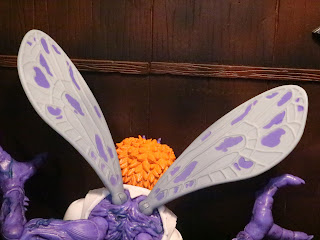 *  Baxter's wings look really cool. They have a great design and the paintjob is very true to the original toy. They're also articulated at the bottom so you can move them around for different poses. 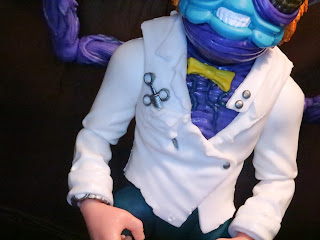 * Up close you can see some cool smaller details like the syringe Baxter keeps in his lab coat pocket (that can't be safe, can it?) and the weird veins running down his body. The lab coat is a separate piece of plastic that fits over his torso, by the way. It's not removable, though. Also, check out Baxter's watch! I didn't even notice that detail on the exclusive version! 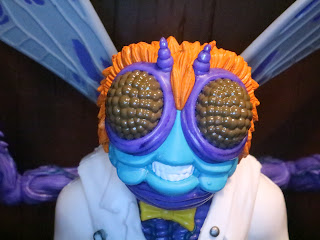 * His headsculpt is amazing! I love how crazy he looks. Seriously, I liked this one on the exclusive version but it looks even better in full color. particularly the hair. It's fantastic. Baxter has some seriously large, compound eyes and a very sinister grin. Yikes! 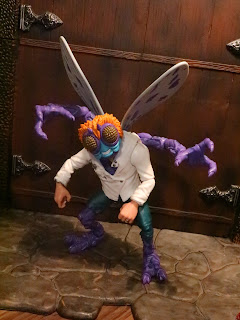 * The articulation on these figures is pretty solid and really does remind me of Super7's other Ultimates lines Masters of the Universe Classics or Conan the Barbarian. The figures are kind of squat and chunky, like the original 1980s and early 1990s Playmates figures, but they're definitely more modern feeling. They feel like TMNT figures, though, and that's a good thing. They're very sturdy and most of the joints are either swivel/hinge joints or true ball joints. You can definitely get plenty of poses out of Baxter, although if you're looking for very fine and subtle posing these don't quite hit that mark. They're truly made to feel like toys, though, which I can respect. 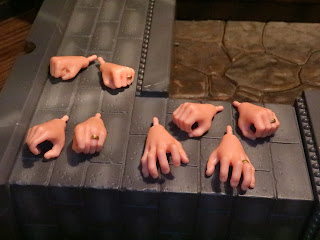 * Baxter Stockman comes with 4 pairs of hands that you can swap around. You get 2 fists, 2 pistol grips, 2 open hands, and 2 regular grips. The fingernails get a paint application and Baxter is wearing a silver band on his left ring finger. Swapping these is pretty easy and I didn't have any trouble whatsoever. 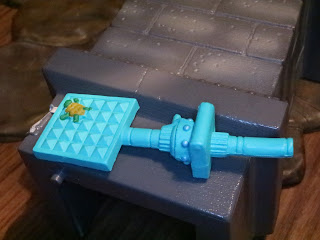 *  When it comes time to deal with a turtle menace Baxter is wielding a handy, dandy.. flyswatter? Yup! The vintage Baxter had one too  complete with a little turtle. Remember that detail on the vintage toy? Well it's here, but now it's painted. Awww.. that's actually kind of depressing, really. This is the one accessory in the set where I like the exclusive version better as it has a red handle and a glowing grid. 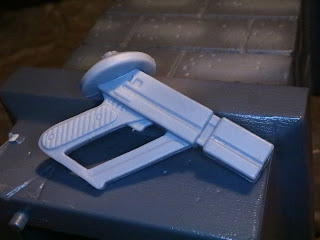 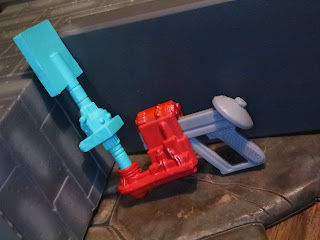 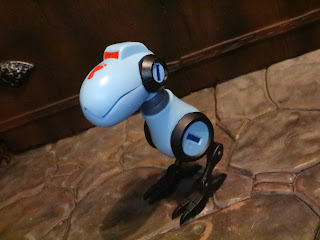 * Baxter Stockman also comes with one of the coolest accessories this year: A Mouser! The Mouser is quite nice with awesome sculpting and  multiple paint applications. This is a really cool bonus and definitely makes Baxter really feel like he's loaded with extras. Remember how the Mouser was packed as its own figure in the Wacky Action series in the vintage line? Well, here it's an extra! 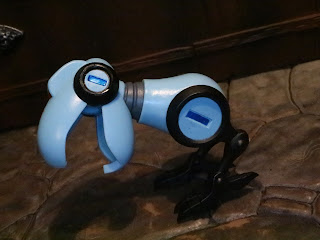 * The Mouser is also articulated. He has swivel hips, a swivel head, and a hinged jaw. I'd love to have a small army of these little fellows. I wonder if Super7 will ever sell them as a group like Playmates did in the 2012 line? 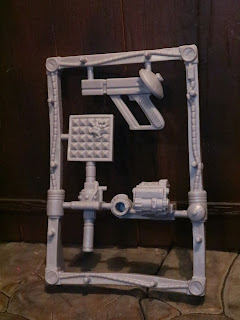 * To really hammer home the vintage inspiration of this line Super7 is including a plastic weapons rack of unpainted weapons with each figure so far. On one hand, there is something interesting about the inclusion of this but ....
The Negatives:
... on the other hand it just seems like a waste. These are the same weapons Baxter comes with but unpainted and attached to the sprues of the rack. Getting them off takes a bit if effort and you'll have to trim off the flashing with a hobby knife or something. Honestly, it just seems like a very pointless inclusion. The vintage Baxter Stockman also didn't have weapons on a rack like this, so it's not even a nostalgia thing here. 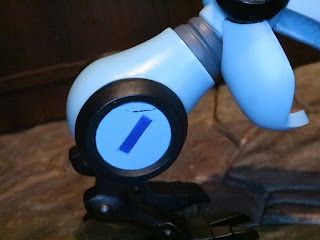 * The Mouser has a very clean paintjob overall but my Mouser does have an errant black streak of paint on his right hip. 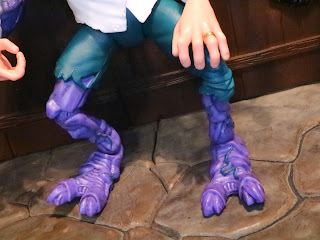 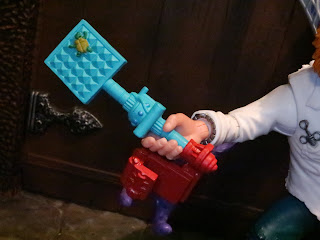 * My last negative has to do with Baxter's flyswatter. I showed above how the piece that attaches to the bottom of the flyswatter also attached to Baxter's ray gun. That's a cool feature but, oddly enough, that's not how the vintage toy's accessories worked. On the vintage toy the device on the bottom actually fit over Baxter's wrist, acting more as some sort of control device for his flyswatter. I wonder why Super7 changed it? It seems like a weird change to make to the figure. 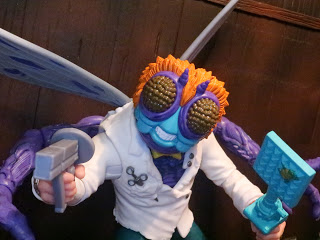 While the Glow-in-the-Dark exclusive Baxter Stockman was cool, the standard version is even better. The sculpt, the colors, and the nice complement of accessories really make this guy something special. These are now long sold out now and the prices are starting to jump up though it seems that there is hope that Super7 may release a second run for fans who missed out the first time. Baxter Stockman is a Great and a 1/2 figure and a very exciting figure in the first series. I'll be checking out the other three figures (Splinter, Raphael, and a Foot Soldier) soon, so stay tuned!