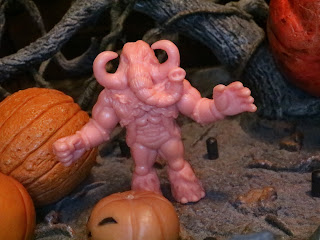 When I think back to the monster toys I had as a kid I always think about Mattel's M.U.S.C.L.E. line of little rubber wrestlers from 1986. Based on Bandai's Kinnikuman line of Japanese keshi figures (Mattel literally just used the molds) these still stand out to me as the epitome of what a minifigure should be. While the M.U.S.C.L.E./ Kinnikuman cast are meant to be wrestlers there definitely are some monstrous designs in the line. Today I'm checking out figure #163, known in Kinnikuman as Mammothman. I know very little about the Kinnikuman anime and manga (though I'd love to be able to watch it/ read it) but what I've been able to learn is that Mammothman is from Siberia, he weights 882 pounds, and he's one of the chojin. He was also in the very first 4-pack of M.U.S.C.L.E. figures I got as a kid (Black Tomahawk was also in there, too) and this is my original Mammothman! Let's check him out after the break... 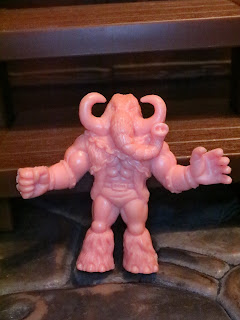 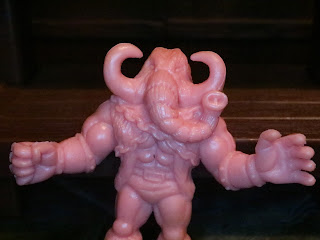 * I've always loved the look of Mammothman. Looking like an anthropomorphized woolly mammoth, Mammothman seems like a tough dude. He kind of looks like Bebop, doesn't he? He's got chains around his chest, massive hands, and some crazy tusks. The sculpts on the M.U.S.C.L.E. figures was always impressive with some really crisp details. 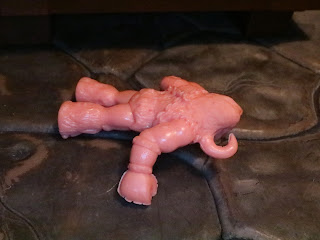 * My only complaint with Mammothman (well, at least with mine) is that he has always had a tendency to fall over. His feet are a bit rounded on the bottom, causing him to not stand up as firmly as the rest of the M.U.S.C.L.E. crew. 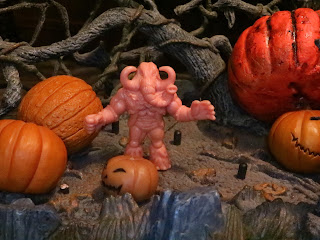 I've been a huge M.U.S.C.L.E. fan most of my life and it's always fun to take a look at one of these awesome minifigures. Mammothman has a killer sculpt and a great design. I hate that he tends to fall over, though. It's not as big of a deal on one of these little guys as it is on some figures, but it still frustrated me as a kid when playing with these little guys and trying to stand them all up. Mammothman is a Great figure and a standout M.U.S.C.L.E.