The Dawn of 31 Days of Toy Terror: Supreme Commander from Mars Attacks by Trendmasters 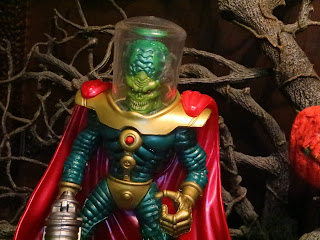 It's time for what I'm pretty sure is going to be my third and final Mars Attacks review for The Dawn of 31 Days of Toy Terror as we have now worked our way up to the Supreme Commander! There was a deluxe (maybe 12 to 16 inches?) talking Supreme Commander as well, but he had a very different color scheme and I'm not sure if he was intended to be a larger Martian or if he was supposed to just be in a different scale. One of the weird things that Trendmasters did (not that they originated it or anything) was release toys from the same line in multiple scales. This article from Infinite Hollywood does a good job of showing off the figures in differing scales that Trendmasters released for this line, plus they had the over sized Martian Supreme Commander I mentioned earlier and the flying saucers with smaller Martians inside. This kind of stuff drove me crazy as a kid! I know many popular lines offered an oversized deluxe figure from time to time or attempted a micro collection but Trendmasters seemed to throw the idea of a "main" scale out the window. Anyways, the 6 inch figures always appealed to me the most from this line and I'm glad to have completed this trio of comic based Martians I missed out on in 1996. Let's take a look at the Supreme Commander after the break... 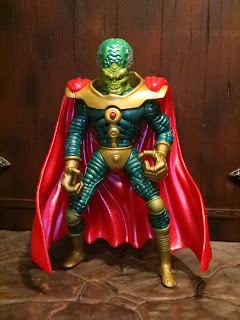 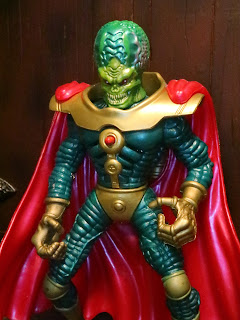 * Of the three 6 inch figures in the comic based Mars Attacks line the Supreme Commander is the most impressive. The green and gold costume with a red cape not only strikes me as the most recognizable look for one of the Martians in this series but it also just looks fantastic. The colors pop, especially because of the metallic green and gold used on the costume. It's very similar to the movie based Martian Ambassador but with more vibrant colors and a more sinister design. 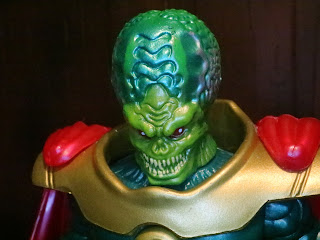 * The headsculpt is really good on the Supreme Commander. Maybe not as good as the Paeec Overlord's headsculpt (those creepy covered eyes and the single eye on his forehead are hard to beat) but it definitely is pretty fearsome. The design of the Supreme Commander's head is also different form the Martian Trooper's headsculpt, too, which is kind of cool. His eyes look a bit more wicked, too. 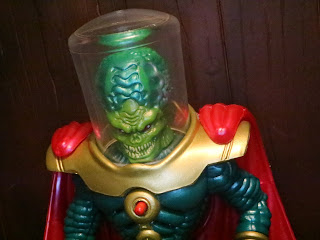 * Like his fellow Martians, the Supreme Commander has a removable dome that helps to protect his fragile cranium and to allow him to remain in a nitrogen rich environment. The clear plastic dome simply fits into his shoulder armor and stays in place quite nicely. 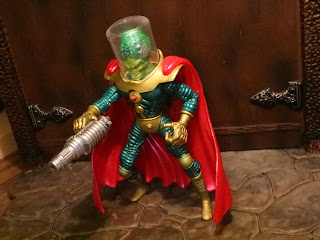 * While he doesn't have more articulation than the other figures in this series the Supreme Commander does have better articulation. First of all he is posed fairly neutrally, meaning he stands well. Second, his arm articulation has swivel joints at the gloves, so he can better hold his accessories. He's pretty good and totally on par or maybe a bit better than most figures from his era. 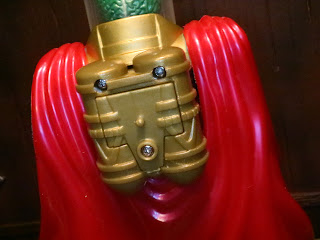 * Like the rest of the figures in the series the Supreme Commander can talk. The NO2 tank on his back holds the batteries and pressing the red button on his chest make him deliver some Martian chatter and the phrase "Take me to your leader." Like the rest of the figures in this set, the Supreme Commander's dialogue seems to be borrowed from the movie based figures. 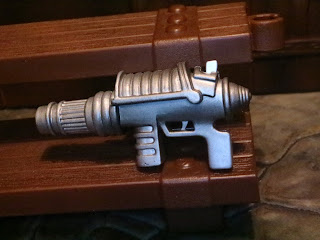 * The Supreme Commander comes with a small deathray that might be the best weapon in the series. It does fire a missile but it's also scaled to look decent and not at all crazily oversized. This might be the first gun in this series that a figure can decently hold. It's excellent! 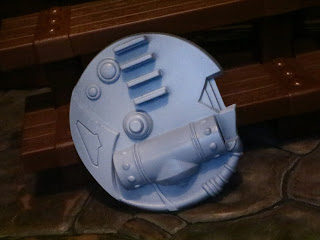 * The Supreme Commander also comes with this really cool shield. I thought the little grooves on the front would hold missiles but they don't. The tube at the bottom does hold a missile, however, so theoretically it can serve as a missile launcher or you can put a missile with a melee weapon like tip in there and use it as both an offensive and defensive weapon. 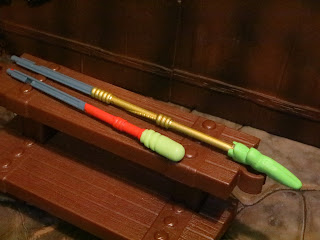 * The Supreme Commander includes two different missiles, though both will work with either weapon. There's a shorter, more traditional missile with a rounded green tip and a longer missile with a curved green point. Both points kind of glow in the dark. It's not a strong glow but it's there. 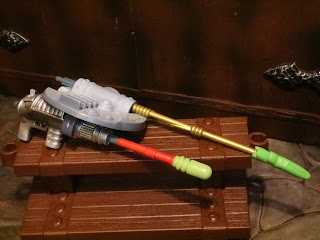 * Interestingly, the shield seems to be able to clip onto the blaster. Attach all of the missiles and it gets even more massive. Heck, attach it all to the large weapon made when the weapons of the Martian Trooper, Paeec Overlord, and Supreme Commander are combined and you really have an oversized weapon that no figure can hold. Pretty crazy looking, though. 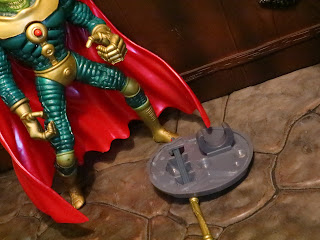 * Is the intention of the shield just that it should attach to the Supreme Commander's blaster? That doesn't make too much sense as the packaging shows him with the shield on his forearm. It doesn't really fit, though. 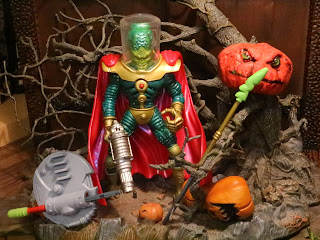 The Supreme Commander is easily the best of the Trendmasters comic based Mars Attacks figures. He looks fantastic and he can actually hold his weapons. A great sculpt, nice paintwork, cool accessories, and the ability to talk ("Ack! Ack! Ack!") makes this guy a pretty cool piece. He's a Great and a 1/2 figure and a slick item produced by a company who was really a pretty large part of the 1990s action figure scene, but one no one seems to rally talk about. Trendmasters had lots of sci-fi and horror licenses throughout the 1990s but, for some reason, they never quite seemed to gain much recognition. They're a big part of this year's 31 Days of Toy Terror Countdown, though, so that's something, huh?
This is the first figure of the Martian Supreme Commander I've reviewed. For more figures from Trendmasters' comic based Mars Attacks line check out the following:
Martian Trooper
Paeec Overlord