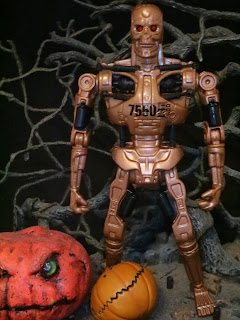 I loved The Terminator as a kid. Terminator 2: Judgment Day was probably the first R-rated movie I was allowed to watch and I saw it at some point after it came to VHS. Watching it for the first time was kind of a frightening experience despite it not being a horror movie. Even before ever seeing the film, though, I was nuts about the character and the toyline. Kenner expanded the Terminator 2 toyline in 1993 with the Terminator 2: Future War subset which saw the Terminator return "to the future to fight tomorrow's evil cyborgs." While there were a few new T-800s and two new villains in the line (Kromium and Cyber-Grip), three of the T-800s were repaints of previous releases. Today I'm checking out the Metal-Mash Terminator! A bronze colored robotic skeleton with glowing red eyes? I think he's a perfect candidate for this year's nostalgia focused 31 Days of Toy Terror, don't you? I never actually had this guy as a kid but I loved this line as a whole and it's fun to revisit some of the toys I only saw on the store shelves or on the card backs. Let's check out Metal-Mash Terminator after the break... 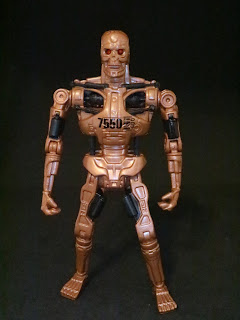 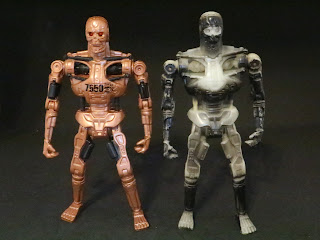 *Metal-Mash Terminator (left) is based on the previously released Techno-Punch Terminator (whom I don't have yet), and the Endo-Glow Terminator (right). This was Kenner's standard endoskeleton T-800 except now he is cast in a really cool bronze plastic with painted details. 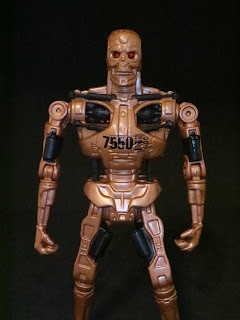 * The endoskeleton T-800 is a really, really cool sculpt. Yeah, he's not as detailed as the later figures we would get from companies like McFarlane and NECA but he's still a pretty amazing looking toy. It's easily one of most impressive sculpts from Kenner's Terminator 2 efforts if not one of their most impressive movie based sculpts overall. They did a great job of capturing the complex details of the endoskeleton and the paintwork on this version, while not accurate to the film at all, is actually the coolest of the three releases. I love the black highlights on the pistons of the endoskeleton! This is an amazing paint variant for sure. 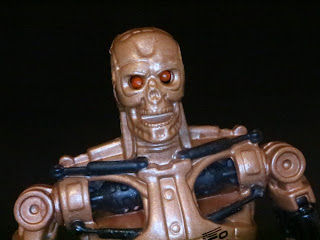 * The headsculpt is pretty good, too, as Kenner really nailed the creepy robotic skulls from the film. The head doesn't turn but the looks of the skull is excellent. 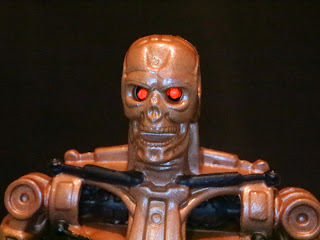 * Guess what Metal-Mash Terminator does have, though? Light piping! The original endoskeleton (Techno-Punch Terminator) had this feature, too, though it didn't work on the Endo-Glow Terminator figure. It works perfectly here and with just a bit of bright light the Terminator's terrifying eyes can light up as it searches for it's prey! 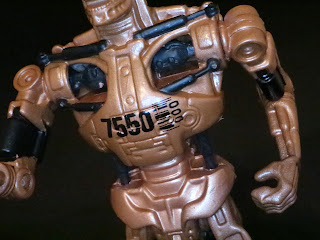 * One of the cool things about the Future War figures was that each of the T-800s had serial number/ bar code on them. The packaging states that  "His number tattoo proves he's programmed to protect the human resistance" but every figure has a different tattoo. I always figured that the different numbers meant that there were multiple T-800s used in the future battles. Another cool feature you can see here is that the T-800's shoulder pistons are visible inside of his chest. You can really watch them turn! 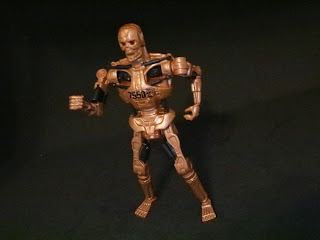 * Overall the articulation is about what you would expect with a Kenner movie figure from the 1990s. While Metal-Mash Terminator is missing a neck swivel he does have working elbows, which is pretty cool. He's quite durable, which is not something that can be said for most modern endoskeleton T-800 figures.

* This guy also has a punching ability. His waist is spring loaded with rubber tubes on each side. Twist him either way and he'll spring back to deliver a metal mash. Oh. Metal-Mash Terminator. Now I get it! 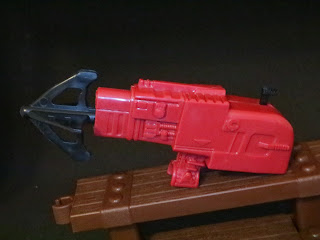 * Metal-Mash Terminator comes with an Arrow Blaster which fires a black arrow missile. This accessory originally came with the White-Hot T-1000 figure but it reused here in red and black. It does have a pretty powerful launch, too! 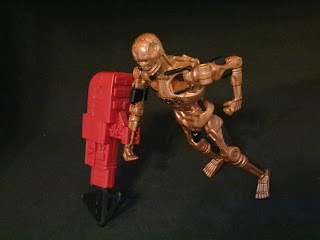 
* The Arrow Blaser is heavy and the cuff really doesn't fit well on Metal-Mash Terminator's arm. It tends to cause the figure to tip over and about the only way you can get him to hold it is if you snap it on sideways. 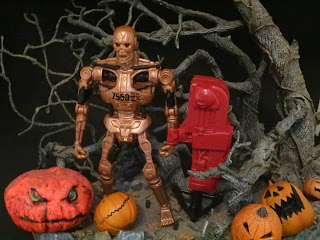 The Metal-Mash Terminator might not have really brought anything new to the Terminator 2: Future War toyline but, man, was he a cool repaint or what? The sculpt of the endoskeleton looks even better with the bronze and black paintjob and the fact that he's packing the spring loaded punch and the light piped eyes really makes him awesome. He's a Great and a 1/2 toy and while not a traditional a "horror" toy, the Metal-Mash Terminator definitely is kind of creepy. As a kid there is no way you wouldn't have been at least a bit frightened of this guy!

If you're a fan of the T-800 I've also reviewed the ReAction Terminator from the Tech-Noir nightclub and the Loot Crate 1/2 Scale Endo Skull from Terminator Genisys.