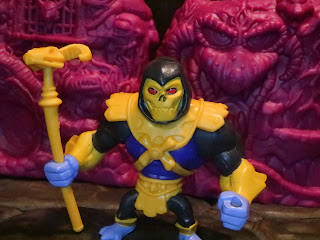 Oh my gosh! Mattel has brought back Disco Skeletor! Yeah, Funko certainly loves him but I can't recall Mattel using the color scheme since the original 2003 figure was released, so that's kind of cool. Mattel is calling him Golden Armor Skeletor, which is a better official name. Just think of him as the toy version of the movie Skeletor if you want. Man, I'm just checking out the most flamboyant versions of popular 1980s villains this month, aren't I? The second series of Masters of the Universe Eternia Minis features a lot of repaints, so this Skeletor is just a repaint of the previously released Skeletor. Still, he's a cool addition to the line so let's check him out after the break... 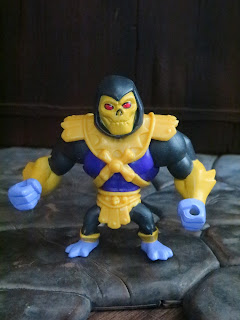 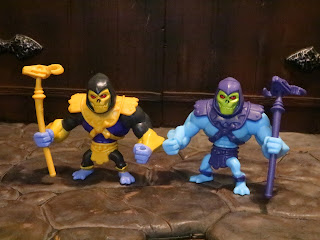 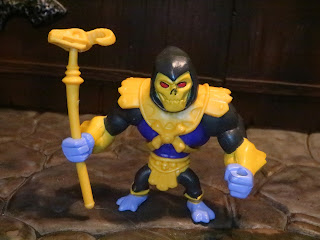 * Golden Armor Skeletor has the same sturdy build and 4 points of articulation as the other figures in the line, too, including his ball joined head. 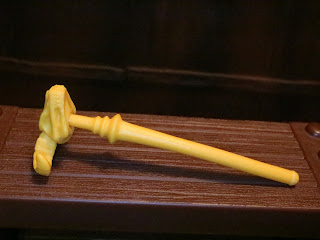 * Skeletor comes toting his Havoc Staff though now it's yellow to match his armor. 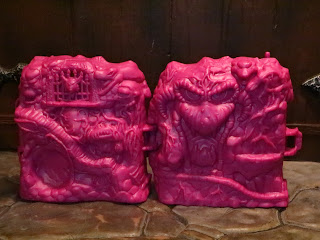 * The Eternia Minis come blind packaged but it's actually not a bad thing at all. First, there is a very prominent code on the bottom of the package identifying the figure inside (Golden Armor Skeletor is "B"), so you don't have to buy these without knowing what you're getting. Second, the packaging is a very cool plastic Snake Mountain. It actually separates in half and you can connect them with other Snake Mountains to make a long chain of evil. It's a cool sculpt and some of the best blind packaging I've ever seen. The detail is insanely nice on this!

* The top also functions as a stand. 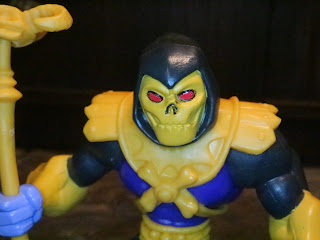 * I'm still not a huge fan of this headsculpt as Skeletor just doesn't look at all that skeletal. I think some of it is the design style of the line (giving everyone big chins and massive underbites to make them look swole) but Skeletor loses some of his charm like this. 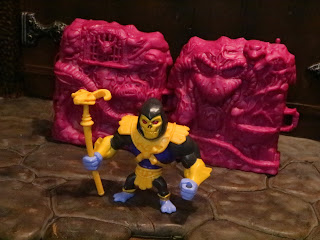 Golden Armor Skeletor is another Great minis and one of the best repaints in the series thus far. I'm quite fond of ol' Disco Skeletor, as crazy as he might be, and it's cool to see Mattel acknowledge the variant again after nearly 17 years. This Skeletor variant is just as good as the standard figure and whichever one you prefer more is just going to be a matter of preference. In the smaller scale, I think this guy looks incredibly striking. Golden Armor Skeletor is apparently the "chase" figure in the set so, like Horde Zombie He-Man, he's supposed to be rarer than the others. I believe it's one per case.

Are you a fan of Snake Mountain? The check out my reviews of the Snake Mountain M.U.S.C.L.E. from series 3's Pack C and the plastic Snake Mountain cases from the series 2 Eternia Minis Faker, He-Man, First Appearance Trap Jaw, and Beast Man.