Action Figure Review: Man-At-Arms (Mondo Exclusive) from Masters of the Universe by Mondo 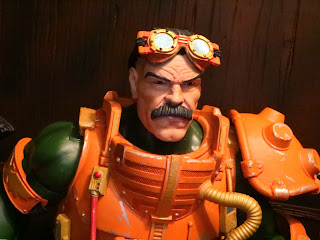 Mondo's 1/6th scale Masters of the Universe line has been one of the most exciting MOTU toy lines since the end of Masters of the Universe Classics. Rather than just remake previous toys, Mondo's interpretations of the Heroes and Villains of Eternia have featured a mixture of classic details, the best elements pulled from a variety of sources, and even some exciting new design features to truly make these some of the best interpretations of the MOTU mainstays you're going to find. Man-At-Arms is the 6th character to be released in the series and he finally gives He-Man someone to find alongside of during epic battles of epicness for control of Castle Grayskull. Scareglow was cool but Mer-Man seemed poised to be the standout figure in the line for 2020. Now that Man-At-Arms has arrived? That just may not be the case! This is without a doubt one of the best versions of Duncan we've ever received in toy form. Mondo. Mondo offered up two versions of the figure, both an exclusive and standard version. This is the exclusive version (long since sold out now) and he comes with an extra Snake Man-At-Arms portrait and a figure of Orko peeking out of a jar. Ready for a look at the heroic Man-At-Arms? Then join me after the break... 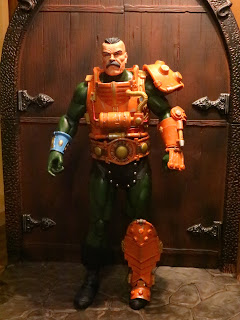 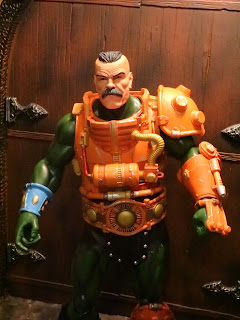 The Positives:
* While the original Man-At-Arms figure definitely showed some elements of technology, over the years the character has evolved into being a technological whiz who creates and utilizes his own gear and gadgets. Man-At-Arms looks amazing. Again, if a movie version of MAA looked this awesome I'd be thrilled. Mondo uses a standard base body and covers it with lots of unique pieces of armor. Man-At-Arms' is like 90% tech here and 10% barbarian warrior, a ratio that works well for the character. I prefer Duncan this way. 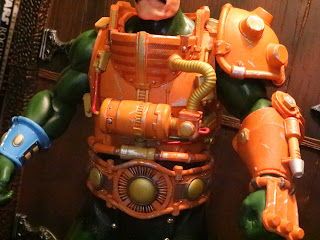 * His chest armor is amazing. and is very reminiscent of the 200x version of the character, only even more impressive. Look at the detail on that armor? The massive pauldron looks fantastic and is also ball jointed, so you can move it around. The various tanks and tubes also look amazing and have some excellent paintwork. 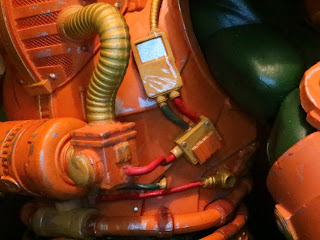 * Look closer and you can see all of the little wires going into the gears and gizmos on Duncan's armor. I love the little control device to the right of the large tube. It kind of looks like an older model iPod, doesn't it? 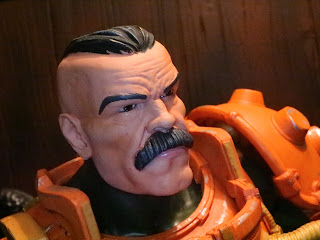 * Man-At-Arms comes with three headsculpts in the Mondo exclusive version. The first is an unhelmeted head and it's probably my favorite. First of all, Duncan looks awesome. He's still pretty serious looking even though he's rocking the awesome Filmation inspired mustache. He's also sporting a cool high and tight haircut that gives him a military feel. Duncan's an old soldier, after all, so this haircut works for him. The portrait is just incredible! 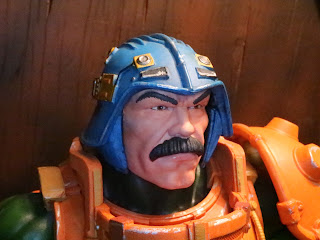 * The second portrait features Man-At-Arms in his battle helmet. The little bits and bobs on the helmet are all fantastically sculpted and painted. Man-At-Arms looks a bit friendlier in this portrait, too. Not a push-over, but he has a more Filmation-like vibe. Or maybe MYP/200x. Gosh, this one's awesome too, though. Is this the best headsculpt in the line? Maybe... 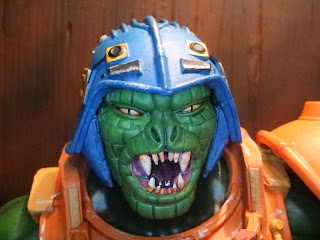 * Last up is the Mondo exclusive Snake Man rendition of Man-At-Arms. In the 200x/ Mike Young Productions cartoon series Duncan and some of the other masters (including Teela) get turned into Snake Men by King Hsss an the Serpent's Ring. Mattel released this figure in MOTUC and now Mondo is paying tribute, too. This is an incredible sculpt! Holy smokes! The eyes, skin, and teeth are perfect. This isn't my favorite of the headsculpts but it definitely is very, very impressive. 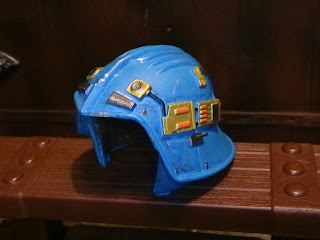 * Man-At-Arms also comes with a loose helmet which you can use along with the unhelmeted head as a display piece. He can actually wear it, too. The outside is as impressive as the helmets on the other portraits but the inside here is actually quite detailed with a padded look. * Want to show off Duncan tinkering around in his workshop? Then give him these amazingly cool goggles. I love them! They have an elastic band and look amazing. 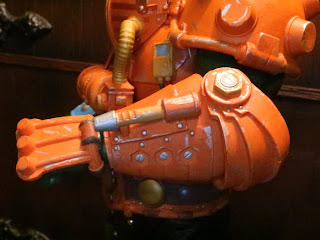 * Let's take a look at Duncan's armor starting with the laser blaster on his left forearm. The armored bit cover his hand is removable (it pops off when you swap hands), so be careful not to lose it. The laser is awesome and is nicely integrated into the rest of the armor. I absolutely love the paintwork on this figure as all of the little details are painted with a true attention to detail. 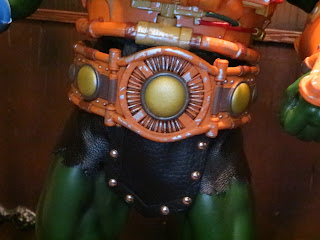 * Man-At-Arms is sporting one heck of a belt buckle, isn't he? It actually sort of functions as a combination belt and stomach armor, though I wonder what the yellow discs are supposed to be. Maybe some sort of miniature power generators for the armor's functions? He's also sporting a pleather loincloth underneath with little tiny rivets sewn on. 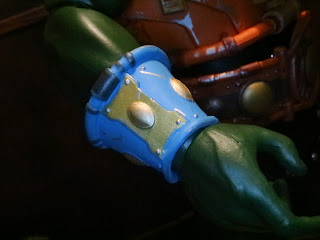 * On his right wrist Duncan has a really cool armored cuff that matches his helmet. Nice! 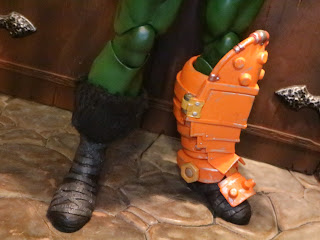 * Man-At-Arms has asymmetrical armor, like the vintage toy, so he's got a furry boot on his right leg (with a soft goods furry cuff) and a heavily armored boot on his left. The armored boot matches the rest of his orange armor and looks like it could provide some serious defense. Heck, I bet it could help Man-At-Arms deliver a serious kick in the junk to any Evil Warriors trying to stir up crap on Eternia, too. Imagine getting kicked with that monstrous metal boot? 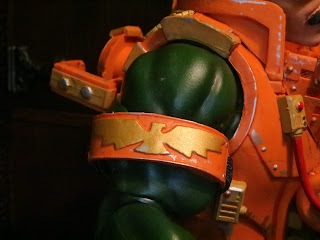 * Who's the boss? While Teela is the Captain of the Royal Guard, Man-At-Arms certainly is in charge of all of the palace security. He comes packed with this shoulder strap that has a gold bird design on it. It fits over his bicep and gives you another display option for the figure. It's not even show on Mondo's official pages for the figure so maybe it's a "secret accessory?" 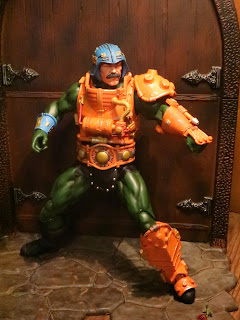 * Mondo's MOTU figures do not feel like your traditional 1/6th scale figure but more like oversized Masters of the Universe Classics figures. Like the other figures in the line, Man-At-Arms is really heavy, but also very durable. Everything feels incredibly sturdy and while these are highly detailed, they feel like toys, too. And that's a good thing! Mondo continues to do a great job with the quality here which should inspire confidence in buyers. The articulation on these figures isn't bad, either, and Man-At-Arms is as fun to pose as the rest of the line. There are even lots of hidden joints on his armor such as the hinged foot armor and the ball jointed pauldron on his left shoulder. 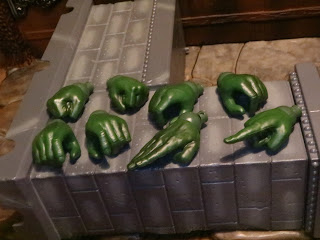 * Man-At-Arms comes with 8 interchangeable hands. There are a pair of fists, a pair of standard grips, a pair of pistol grips, and the a pointing right hand and a flat right hand. It kind of looks like it's posed as a salute or for some sort of karate chop. The hands on these are easy and the wrist pegs are very thick and durable. No worries about swapping these hands out! 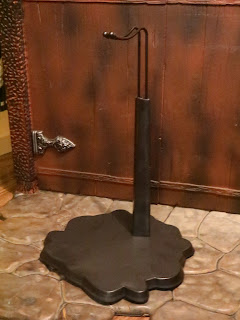 *   It's not necessaery but  Man-At-Arms comes with the same black plastic display stand with a metal display hook that the other figures have. The hook rests under under crotch to keep him standing. Aesthetically it's not the best design for a stand but it works quite well for a heavy figure like this. 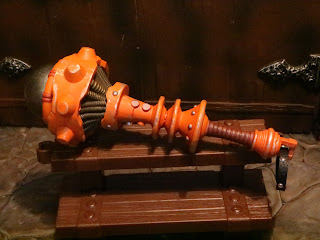 * Let's get into the super cool arsenal of weapons that Duncan comes with! First up is his mace. This thing is massive! It has more paint applications than most action figures you own and it has a cool leather loop at the bottom, too. While the top of the mace looks like a simple blunt instrument of destruction underneath the head you can see what looks like wires, hinting that this is more than just your standard mace. 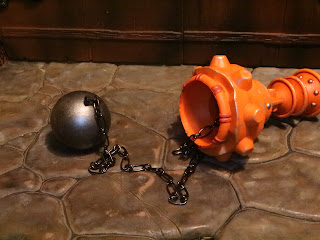 * Mondo's Man-At-Arms features a very cool feature: The head of the mace pops out to function like a flail. There's a metal chain inside! This was originally intended to be a feature of the vintage Man-At-Arms figure (see Mark Taylor's B-sheet design for the character, then called "Arms Man") but it was dropped. How amazing to see it recreated here, right? This is just incredible! 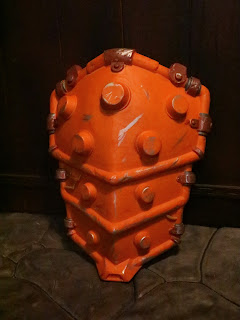 * Next up Duncan comes with a massive shield that matches the design of his shoulder pauldron and the head of his mace. This is another "new" addition to Man-At-Arms as I can't remember another toy of the character coming with this. It looks incredible and further adds to the bulky look of Duncan's armored outfit. 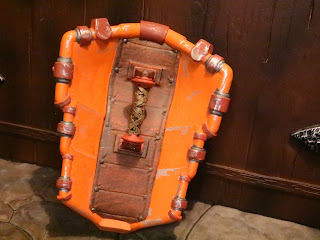 * Flip the shield around and you can see all of the excellent detail on the back, too. Mondo's accessories in this truly are second to none. 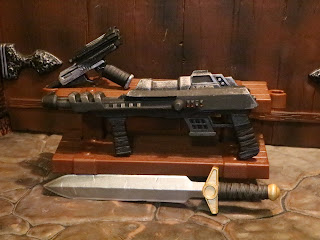 * Man-At-Arms also comes armed with these three weapons which came with He-Man as well. They're awesome! You get the weapons rack rifle and short sword and the movie laser pistol. They look pretty similar paint wise to He-Man's accessories but they actually fee like they belong with Man-At-Arms more, don't they? 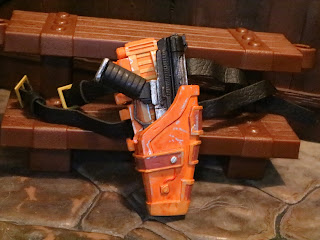 * To hold his pistol Man-At-Arms comes with a really cool armored holster. It matches his armor, has two functional straps, and holds the pistol very securely. 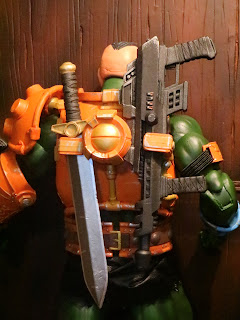 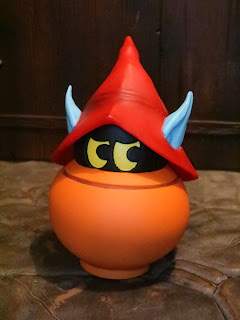 * He-Man came with Berbie, Skeletor came with Relay and now Man-At-Arms comes with Orko! Yes, Orko, the beloved court magician and the constant thorn in Duncan's side. This version of Orko is hiding in a pot, presumably attempting to escape Duncan's wrath after messing up one of his experiments or after a magic trick gone awry. The Orko head is fantastic! It's very Filmation inspired and the shifty eyes looking off to the side are hilarious. I love these little pack in characters! 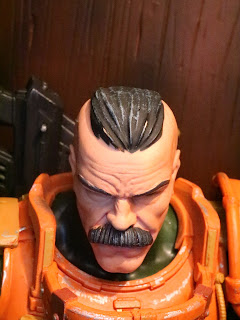 The Negatives:
* I love Man-At-Arms haircut but, unfortunately, there is some paint missing on the front. There are intentional highlights to bring attention to the individual strands, so don't mistake those for missing paint, which is near his forehead. 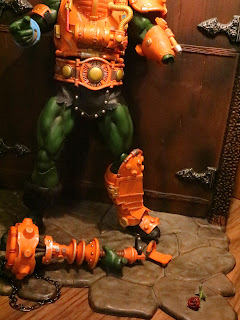 * Man-At-Arms' mace is amazing but it's actually so heavy that he has a hard time holding it up. It's more of an issue that the wrist joints tend to be easier to take in and out. I really don't have a good solution. Maybe tuck some saran wrap or something in the wrist peg to give it a bit more resistance? 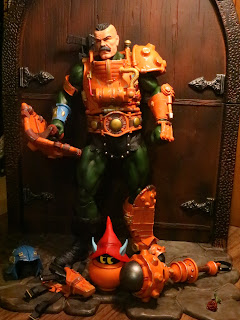