The Dawn of 31 Days of Toy Terror: Fruit Brute from Vinyl SODA by Funko 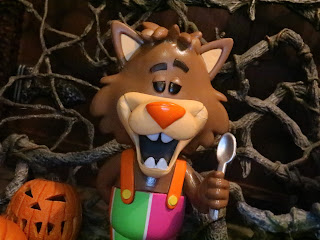 It's a Saturday which means I'm kind of jumping outside of the parameters of this year's The Dawn of 31 Days of Toy Terror to show off something different: Fruit Brute from Funko's Vinyl SODA line of collectible vinyl figures! Released as a WonderCon 2020 exclusive the Fruit Brute is a stylized vinyl figure capturing the mascot for the General Mills cereal named after this colorful and lovable werewolf. Fruit Brute was the fourth of the General Mills monster cereals and was originally released in 1974. Fruit Brute was discontinued in 1982, before I was born, but fortunately is was brought back for the Halloween season of 2103. Fruit Brute was originally a generic fruit flavored cereal with lime flavored marshmallows but the relaunch was a cherry flavored cereal. Having tried all five of the cereals when they relaunched, I'd say it's my second favorite (Fruity Yummy Mummy is my favorite). Despite General Mills not keeping the cereal on shelves the cereal monsters themselves are quite popular and Funko has used them multiple times on different toys. Let's check out this super cool Fruit Brute after the break... 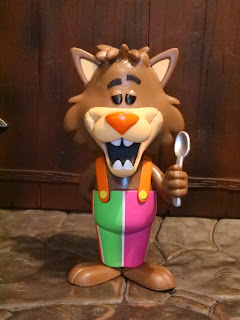 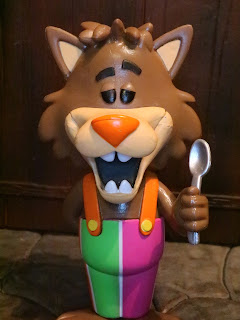 The Positives:
* When I first reviewed one of the Masters of the Universe Vinyl SODA figures this spring I noted that they reminded me of 1970's breakfast mascots. Well, lo and behold, now we get an actual 1970's breakfast mascot in this style! The bright, colorful look of the Fruit Brute (sometimes spelled as Frute Brute) is captured very nicely here. I love how smooth these look and how they capture the cartoonish artstyle of the character's depictions. There is a variant where the character is cast in all shades of pink, too, though I wanted the recognizable Fruit Brute. 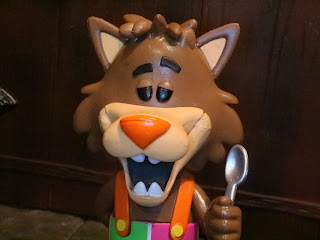 * The headsculpt is amazing! Isn't the Fruit Brute just adorable? I want to snuggle him, squeeze him, scratch him behind the ears, and tell him he's a good boy! A few years ago when my daughter was quite little we watched the Abbot and Costello meet the monsters movies. We also watched the Lon Chaney Jr. version of The Wolfman and my daughter's response when the Wolfman came out was "Aww!! He's so cute and fluffy!" So is the Fruit Brute. Love this guy! 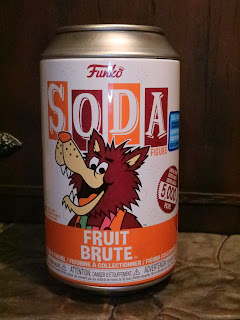 *  I absolutely love the cans these come in! The soda can design is so incredibly cool and makes for a rather unique display piece on a shelf next to he figure. Wouldn't Fruit Brute soda be great? I'm guessing it would be a slightly tart cherry soda with a bit of vanilla mixed in. The can shows off the Fruit Brute and displays all of the expected labels and includes all of the legal info, etc. The top of the can separates so you could use the can to store trinkets as well, and it's even sculpted to look like the top of a soda can. It's made from a much more durable metal than your average soda can, too, so it's quite a nice collectible. 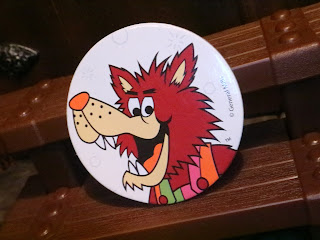 * Inside the can is a round, sturdy cardboard disc. It's kind of like a POG, though a bit larger. On the front is the lovable ol' Fruit Brute while the back has the figure's name and the run amount listed (4,200). 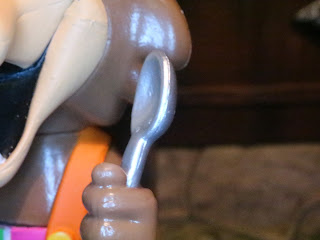 * What's the Fruit Brute carrying around with him? A spoon of course! The better to eat some yummy cereal with! (My daughter took this picture, by the way!) 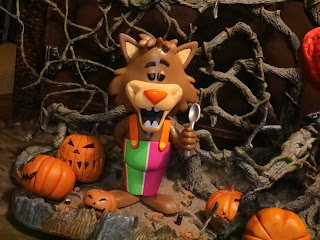 It's been tough to get a full set of toys based on the General Mills cereal monsters but Funko's Vinyl SODA line might just deliver. So far they've released four of the five (Boo Berry hasn't been released yet) and they all look quite nice and have been fairly easy to acquire. The Fruit Brute looks fantastic and is a great collectible vinyl figure. I really like the Vinyl SODA line and while I didn't anticipate picking up anything outside of the Masters of the Universe releases the cereal monsters roped me in. Fruit Brute is a Great figure and a fun addition to the series!
This is the first toy of the Fruit Brute I've reviewed on the site! 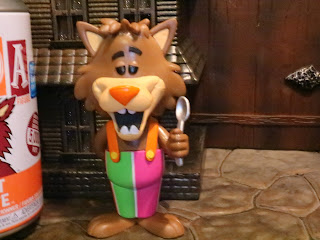 My daughter wanted to take a few more pictures, so her they are! 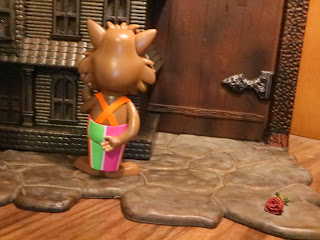