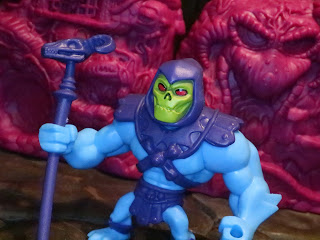 Oh sheesh! Mattel has done it again! As part of the second series of Masters of the Universe Eternia Minis Mattel just carried forward Skeletor from series 1. Rather than come up with another cool paint variant they just repackaged the same figure, gave it a new letter in the series, and that's it. Why not give us a cool paint variant, like the Leo Skeletor or the 200x blood red variant, or give him black armor and a white face like the movie version of Skeletor? Seriously, anything would have been preferable than a straight up repack. Lazy, lazy, lazy. Let's spend a few minutes chastising Mattel's boneheaded repack after the break... 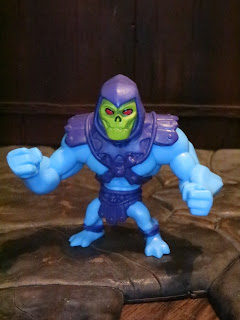 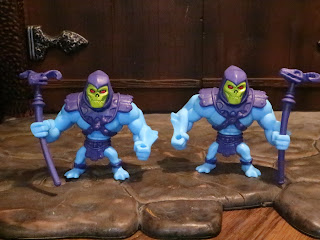 Comparison:
* On the left is the series 2 Skeletor while the series 1 Skeletor is on the right. Notice any differences? Not really. The skin tones might be a bit different but that's just a production issue and not a variation or anything. 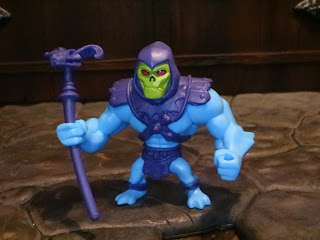 The Negatives:
* I'm starting with the negatives first: This is the same figure you already have if you bought series 1. Mattel couldn't even be bothered to offer up a cool new palette swap. If you were a loyal customer who bought series 1 then Mattel is only too happy to get you to double dip with series 2. Lame. 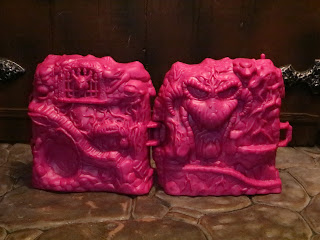 The Positives:
* The Eternia Minis come blind packaged but it's actually not a bad thing at all. First, there is a very prominent code on the bottom of the package identifying the figure inside (Skeletor is "H"), so you don't have to buy these without knowing what you're getting if you know the codes. Second, the packaging is a very cool plastic Snake Mountain. It actually separates in half and you can connect them with other Snake Mountains to make a long chain of evil. It's a cool sculpt and some of the best blind packaging I've ever seen. The detail is insanely nice on this! 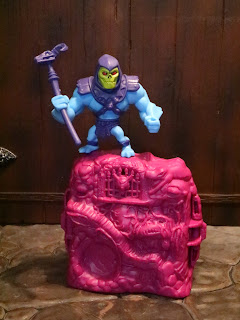 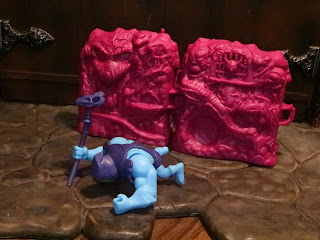 A few years back I came up with a list of my action figure No-Nos and one of them involves a collector having to buy a duplicate figure. I know that duplicates are an inherent part of the "blind box" marketing gimmick (which feels like it has run its course) but, considering that Mattel put a duplicate figure in the second series which uses letters to help you avoid duplicates, that seems awfully close to the spirit of one of my No-Nos. This is a pretty Crap 1/2 move, Mattel. There are dozens of cool Skeletor repaints that could have been made if a Skeletor was needed in this set but instead we get this. Lame.
I've reviewed so many toys based on Skeletor/ Keldor that I've given him his own review archive. Check out Snake Mountain for a plethora of Skeletor reviews!

Are you a fan of Snake Mountain? The check out my reviews of the Snake Mountain M.U.S.C.L.E. from series 3's Pack C and the plastic Snake Mountain cases from the series 2 Eternia Minis Faker, He-Man, First Appearance Trap Jaw, Serpent Claw Man-At-Arms, Golden Armor Skeletor, and Beast Man.