The Dawn of 31 Days of Toy Terror: Sam Hain from Extreme Ghostbusters by Trendmasters 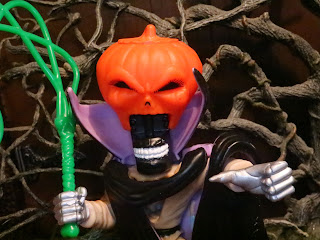 For today's installment of The Dawn of 31 Days of Toy Terror we're going back to the year 1997 to check out a figure from Trendmasters' Extreme Ghostbusters line: Sam Hain! Based on the name for the Gaelic festival of Samhainn, marking the end of the fall harvest season and the beginning of winter, Sam Hain is a ghost from 7th century Ireland who has fought the Ghostbusters on a number of occasions. While Sam Hain never appeared in the 1997-1998 Extreme Ghostbusters cartoon series other than in the intro, he did get a toy in the 1997 toyline. That's the one we're checking out today! If you were a kid interested in anything sci-fi related in the 1990s (Godzilla, Battlestar Galactica, Independence Day, Mars Attacks, Lost in Space) Trendmasters was definitely on your radar. They were a very ambitious company that put out some really cool product that, unfortunately, was often a bit flawed and never seemed to fully capitalize on the popularity of the properties they licensed. While it's had a resurgence thanks to the quality of IDW's comics, Extreme Ghostbusters didn't make much of a mark and Trendmasters' toyline quickly faded. I never had any of the figures originally but back in 2013 someone sent me this guy (thanks, John!) and he has been part of my jack-o'-lantern collection ever since. Ready to travel back to check out a spooky specter? Then join me after the break as we look at Sam Hain... 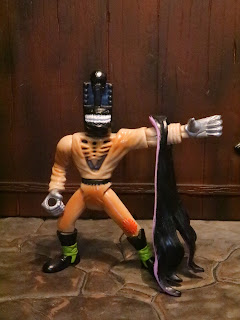 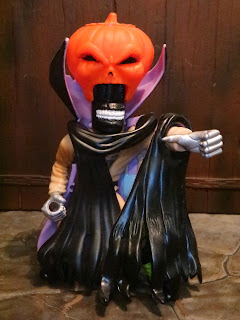 
* Sam Hain is definitely an interesting looking figure for sure. Trendmasters captured the essence of the character quite well: Spooky Jack-o'-lantern head, long black robes, and a mixture of orange, black, and purple. The sculpt is about what you'd expect from Trendmasters, putting it fairly in line with most other mid-late 1990s toylines aimed at kids. There's a nice amount of detail and bright, bold colors which are fitting for the Ghostbusters toylines. 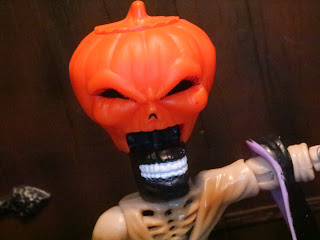 * Sam Hain is a pretty handsome looking guy (he looks kind of familiar, too...) and he's sporting a giant Jack-o'-lantern as a head. Well, actually it goes over his head. The pumpkin is intended to launch off of his head to reveal his true face, but we'll get to that in a minute. Sam's Jack-o'-lantern head is pretty creepy looking with some great facial features. I love it! 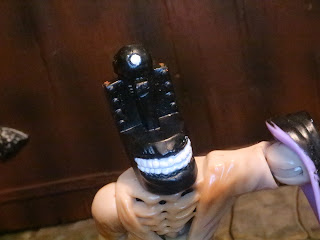 * Underneath his Jack-o'-lantern head Sam Hain is sporting a head with lots of teeth and one eyeball. It's kind of underwhelming, actually (the pumpkin head is way cooler) but, at the same time, cool little features like this definitely were a staple of Trendmasters' action figures. The intention was that the pumpkin head could "launch" off to reveal Sam Hain's "real" face but the feature just doesn't work. More on that in a moment... 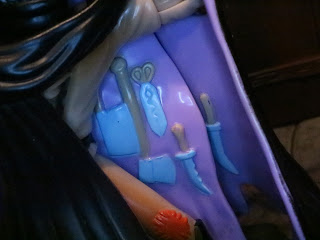 * Sam Hain's robe is made up of four plastic panels (one is permanently attached to his left arm) and when you slide that panel over it reveals a variety of bladed tools hidden underneath his cloak. You can go as dark as you want to here but I imagine these are tools he uses for carving Jack-o'-lanterns. Again, Trendmasters definitely put a lot of thought into their toys and clearly tried to make them really fun with lots of cool little extras. 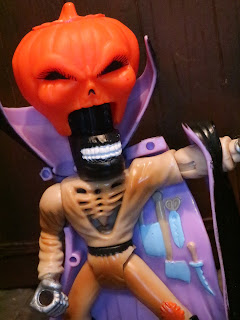 * Underneath Sam Hain's cloak you can see his body. He's wearing a brown suit that kind of looks like Lak Sivrak's outfit from Star Wars. Further, though, you can see that his torso is skeletal. The clothes kind of...cling to his rib cage? I don't know. It's very cool, just don't think about it too hard. 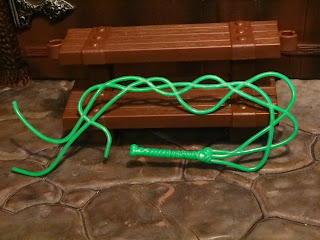 * I love that Sam Hain comes with a vine-like whip. The handle is detachable on the bottom to make it easier for it to fit in his right hand. it's a simple design but it looks pretty nice on display. The package advertises that he has "Whipping Arm Action!" but I can't find any evidence of an actual action feature. I guess it's just referring to the fact that he has a whip and his arm swivels. 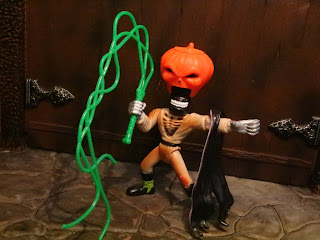 * While he's not what you would call a super-articulated action figure Sam Hain still has standard joints, plus a swivel/hinge left elbow and swivel left wrist. The figure itself seems quite durable and you can get a few cool poses out of him. The late 1990's were a different time for toys, kids. 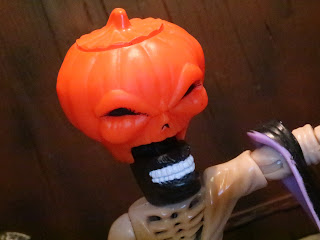 * As I mentioned above, it seems that the intention is for Sam Hain's pumpkin head to be able to launch off of his body, revealing the single eyeball head. The problem is I cannot figure out a way for the pumpkin head to stay in position. It's always hovering above the body due to the spring. Trendmasters often had some very cool action features but it seemed like they only worked well about half of the time. 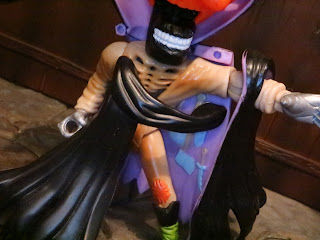 * Sam Hain's robe is made of four separate pieces, three of which are removable. It's an interesting way of tackling the robe but the front piece is really hard to keep in place. It tends to fall out while you're moving the figure around. 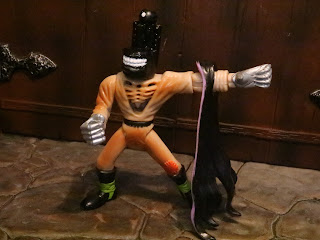 * The last flaw that stands out to me is that while Sam Hain has three removable pieces of his robe, the fourth piece is pretty much permanently stuck on his left arm. Yeah, if you really worked at it and used some heat you could get it over his hand but I imagine many times you'd simply tear off his wrist joint. Why make three pieces removable but not all four? 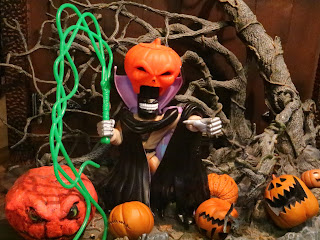 Sam Hain is a perfect figure for 31 Days of Toy Terror, isn't he? He's spooky, nostalgic, and he's absolutely related to Halloween! The Extreme Ghostbusters line was a strange line with some cool, colorful designs but not a lot of appeal to collectors at the time. Heck, they didn't even get around to making all of the Ghostbusters team from the show. Trendmasters did try to do unique things and they were truly a staple of the mid-late 1990s toy market, but it's tough to think of a line they made that's still highly sought after today. Maybe Battle Planets? Anyways, this guy is a Good and a 1/2 figure: Disappointing, sure, but still a bit fun.