The Dawn of 31 Days of Toy Terror: Buzz-Saw Hordak from Masters of the Universe by Mattel 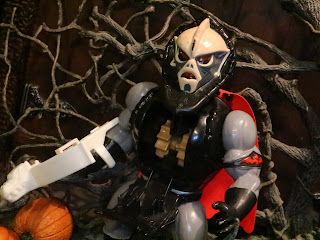 You surely didn't think I'd let the Dawn of 31 Days of Toy Terror pass without an appearance from a Masters of the Universe toy did you? Of course not! I was trying to decide on a frightening figure from the vintage MOTU line and I decided on Hordak, the ruthless leader of the Evil Horde! I actually had the original Hordak and Buzz-Saw Hordak as a kid though somewhere along the way my original Hordak went missing. Fortunately I kept Buzz-Saw Hordak, though, as he's the rarer of the two figures. Hordak was one of only three character to receive variants in the vintage line (alongside He-Man and Skeletor) which definitely bumped up his street cred. Interestingly, Buzz-Saw Hordak doesn't look very different from the original release. His uniqueness comes from the horrifying weapon hidden inside! Released in the 6th year of the line (1987) Buzz-Saw Hordak seems like he may have been inspired by the She-Ra: Princess of Power depiction of the character as a technologically infused nightmare. Let's cut to the chase and check out Buzz-Saw Hordak after the break... 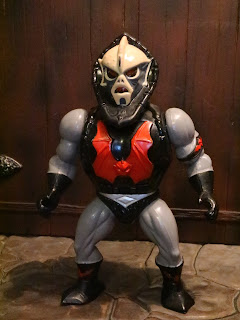 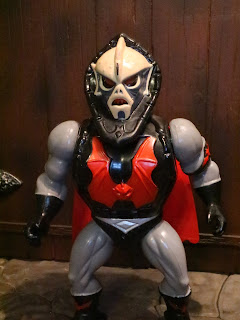 * There has long been fan conjecture that the main members of the Evil Horde (Grizzlor, Leech, Mantenna, etc.) are based on the Universal Monsters. That doesn't seem to really be the case but Hordak definitely takes inspiration from sources that put him in the realm of horror. His armor, covered with bats (the Evil Horde's logo) and with a red and black color scheme definitely gives him a vampire-like appearance. There were lots of early concepts for Hordak that didn't look as vampire-like but the final result definitely seems like a magical vampire wizard. One of the big differences between this figure and the original Hordak is his belt. The standard figure has the regular MOTU furry trunks and belt while this guy has a diamond shaped belt buckle. 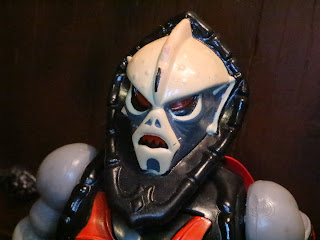 * Hordak's headsculpt (designed by Ted Mayer) is apparently based on a witch doctor's mask. It's an incredible design, both skull-like and alien. The red teeth and eyes definitely make Hordak even more frightening. He's also wearing a collar made of bones of some sort (it's part of the headsculpt). 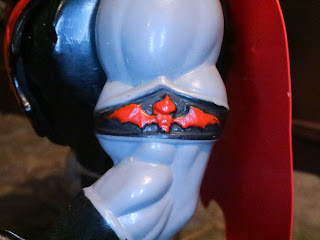 * While he is rocking a massive Horde emblem on his chest, that's not enough for Hordak. He's also sporting an armband with the logo of the Evil Horde. It's a nice detail that ties him in with his cronies. 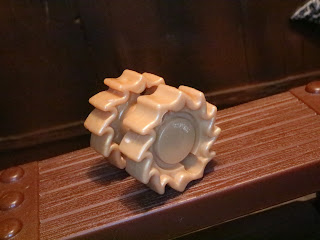 * Buzz-Saw Hordak's Buzz-Saw has become a fairly hard to find weapon in MOTU collecting. It's a simple bronze weapon that depicts two connected saws with serrated teeth. he can't really use it on its own, though, as it launches from his chest to cause some wicked devastation!
*The original figure also came with a minicomic: "Enter Buzz-Saw Hordak!" I don't have this comic, but it was part of the original package. 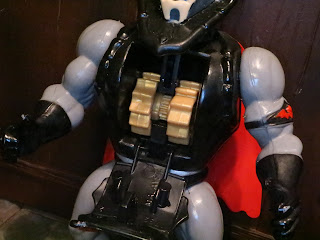 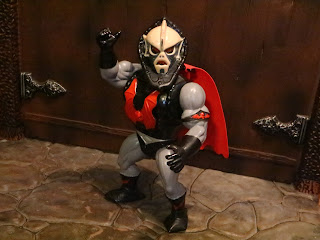 * Most of the vintage MOTU figures have nearly the same articulation, and Buzz-Saw Hordak's only real difference is that he doesn't have a waist joint due to his action feature. The vintage MOTU figures may not be very well articulated but the dynamic, battle ready pose certainly made them incredibly fun to play with as a kid and they're pretty durable. Also, he's got a launching buzz-saw. That's a plus, too. 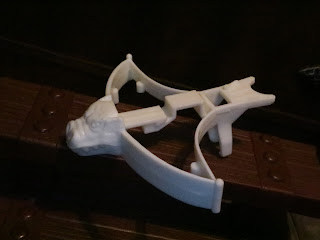 * I've never been wild about the crossbows most of the vintage Evil-Horde members came with (these were radically improved for Masters of the Universe Classics) . I mean what's the point? It just knocks over a person standing nearby? I've never really liked these. 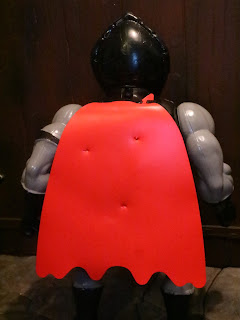 * I don't like Hordak's cape, either. It's made from a soft vinyl (kind of like the vintage Star Wars capes) and it uses these thin little tabs to plug into slits in the lever on Hordak's back. It doesn't fit too well, tends to fall off, and feels very fragile. I'm surprised mine has unbroken tabs! I have no idea where the weird holes came from, though. 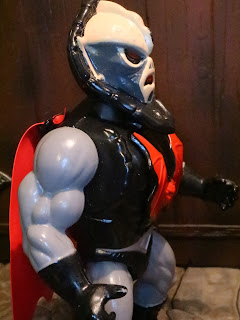 * Yeah, I know it's part of the action feature, but Hordak's chest looks oddly oversized. He doesn't look as proportional as he should, especially with the larger, smooth panels on his sides. What's the deal here, huh? 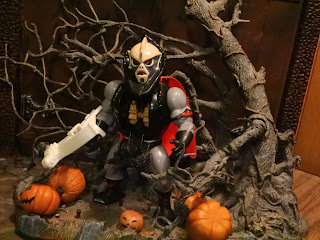 While I love his action feature, Buzz-Saw Hordak has never been one of my favorite MOTU toys. I really wish he was a bit more unique from the original figure. He's cool, but the clunky looking chest and the frustrating cape kind of ruin the experience for me. I'm also not a huge fan of the vintage Horde crossbows. They're just kind of lame if you ask me. He's still a Good and a 1/2 figure but, if I didn't own him from childhood, he's not exactly a figure I'd be working to track down at the current crazy prices some vintage MOTU items are fetching these days. Still, he shoots a buzz-saw from his chest, and that's worth something.

If you're a fan of Hordak then check out my reviews of the Masters of the Universe Classics "Buzz Saw" Hordak and the Spirit of Hordak, NECA's Hordak staction, the ReAction Hordak and Hordak (Grey), the Sonic kids meal Hordak, and the M.U.S.C.L.E. slime Hordak.