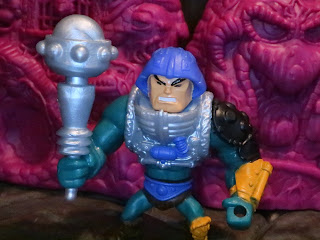 Masters of the Universe Eternia Minis series 2 is full of repaints, repacks, and remakes of previously released figures. While some of them are kind of lame, some of the repaints are fairly inspired. Take Serpent Claw Man-At-Arms here; based on a slightly uncommon variant from the Masters of the Universe vs. The Snakemen series of the 200x line, this is a pretty unique look for Man-At-Arms that radically differs in color from his most well known looks. That makes this a more fun and interesting variant in my book who definitely will stand out on the shelf. It's also cool to see some more acknowledgment of the 200x line and designs by Mattel, especially hearing about the hostility some at the company seemed to have had for the 200x line during the Masters of the Universe Classics era. Let's take a look at a minifigure celebrating a pretty fun era of MOTU after the break... 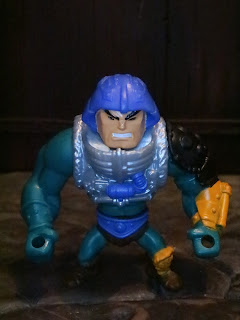 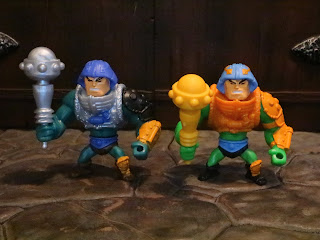 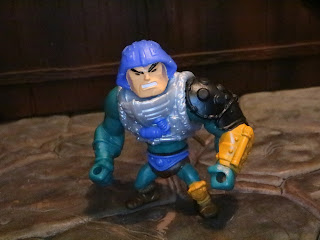 The Positives:
* Since he's a repaint of the previous Man-At-Arms, Serpent Claw MAA still has a really nice sculpt. He's very detailed and his color scheme does an admirable job of capturing the look of the 200x variant the figure is based on. It's quite cool to see Duncan in a different color scheme. The laser blaster on his left arm is also quite pronounced, which I really like. 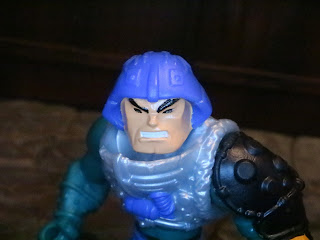 *  Man-At-Arms has the same headsculpt as the series  figure, though I wish he'd had the headsculpt from the 2014 figure. It would have meshed better with this figure since it's based on a 200x variant. His face is still quite expressive, though (he looks pretty angry!) and he's also sporting a clean shaven look. Yup, no stache here. That's accurate to the vintage toy but not the 200x figure. I've always liked Duncan better with his mustache, but it's OK to have some variation here since this is a repaint. 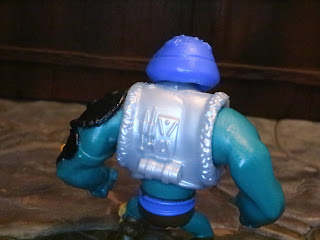 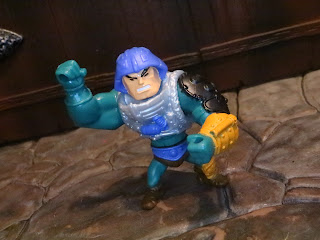 *  These are nice little minifigures with decent articulation, especially the ball jointed heads.  They're very durable little figures and would probably fit in well with lines like Imaginext and the Hasbro Heroes figures, so if you have a little one who's into MOTU these could be some decent starter toys. They're fun to play with and have a lot of shelf presence! 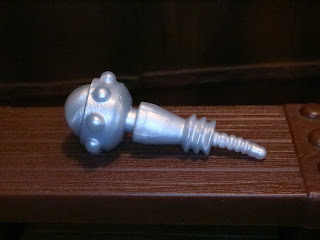 * Duncan only comes with one accessory but it's his classic mace. It's molded in silver this time to better match the look of the Serpent Claw variant. 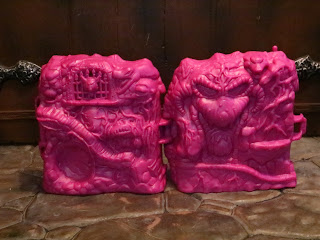 * The Eternia Minis come blind packaged but it's actually not a bad thing at all. First, there is a very prominent code on the bottom of the package identifying the figure inside (Serpent Claw Man-At-Arms is "D"), so you don't have to buy these without knowing what you're getting. Second, the packaging is a very cool plastic Snake Mountain. It actually separates in half and you can connect them with other Snake Mountains to make a long chain of evil. It's a cool sculpt and some of the best blind packaging I've ever seen. The detail is insanely nice on this! 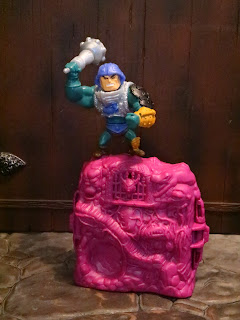 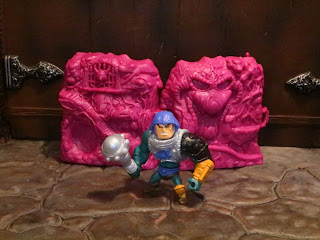 There are only two Heroic Warriors in the second series of Masters of the Universe Eternia Minis and one of them, He-Man, is a straight up repack of the series one figure. Serpent Claw Man-At-Arms is the second Heroic warrior and he's the winner of the two. I already liked this Man-At-Arms sculpt and I think this color scheme might be even better! The 200x line had some cool color variants and Serpent Claw Man-At-Arms was a pretty unique one so it's great to see it here. For $5 bucks, this is an Epic little minifigure and one of the highlights of Series 2. Make sure to track him down if you can!