The Dawn of 31 Days of Toy Terror: Lara Croft Conquers the Legendary Yeti from Tomb Raider by Playmates 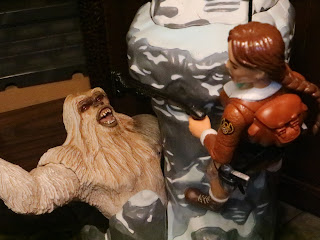 Why are we reviewing a Lara Croft action figure for The Dawn of 31 Days of Toy Terror? Simple: Because she comes with a terrifying yeti! I didn't get a Playstation until Christmas of 1998 so by the time I got it I had three Tomb Raider games to catch up with. Even if you didn't have a Playstation in the 1990s there was no way you could avoid Lara Croft as she was everywhere. As a young teenage boy who loved adventure movies and exploration, Lara Croft was irresistible (also, a Lara Croft action figure was the first figure I reviewed on The Epic Review. It was a big deal when Toy Biz released a Lara Croft figure under their Video Game Super Stars brand but she turned out to be kind of horrific herself. Fortunately, Playmates Toys picked up the license a year or so later and released some pretty nice video game based figures that included elaborate dioramas. While Lara Corft herself was always the star of the show, the sets included various animals and creatures she encountered on her journeys. Today I'm checking out the Lara Croft Conquers the Legendary Yeti set from 1999. I remember buying this at a Walmart and being insanely impressed with it back in the day. I always love to include creepy cryptids and mythical monsters in 31 Days of Toy Terror along with my favorite lines of the past, so this one seemed like a real winner. Let's check this set out after the break... 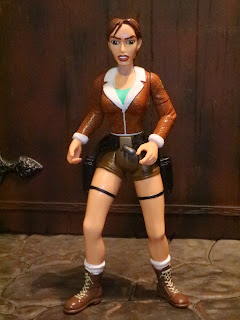 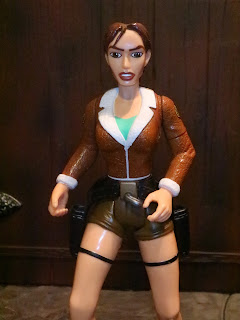 
* Playmates did a pretty impressive job of capturing what she looked like in the game and in the advertising and licensing art. Rather than just wearing her iconic turquoise tank top and shorts Lara is also sporting her leather bomber jacket from Tomb Raider 2. It's a fantastic look for her and definitely is more fitting for a snowy environment like the Himalayas than her classic duds. I mean, she is still wearing shorts, so she's still gotta be cold. The texture is really good on the jacket with a leather-like pattern. 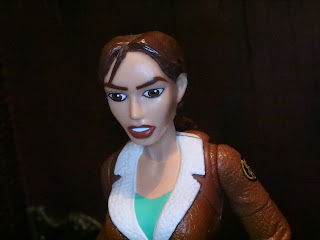 * While Lara's face might look a bit "unusual" by today's standards you really can't say that Playmates didn't capture what Lara Croft looked like around 1998 and 1999. The details are sharp and clean and she really resembles the character whose face was plastered everywhere at the time! Flip through a video game magazine from the late 90s and it seems like nearly every other page has Lara Croft on it. 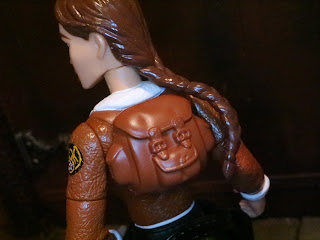 * It's not removable but Lara is toting around a backpack. It's a cool extra detail for her adventuring exploits! 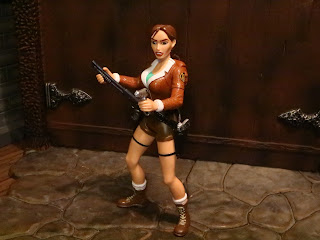 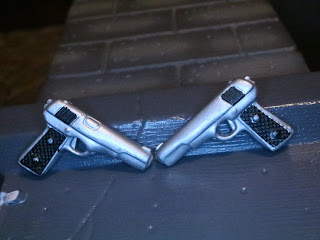 * Playmates packed all of their Tomb Raider figures with some nice weaponry and most Lara Croft figures included her standard pistols. The sculpt isn't bad at all and the fact that these had paint applications really made them stand out. Lara nearly always carried these in the early games (they had unlimited ammo) so you definitely want these to come with your figure for sure. 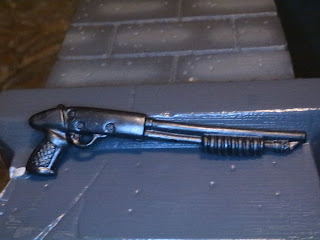 * Lara also comes packing a pretty sweet shotgun. The sculpt is excellent and quite realistic, way more so than what we saw in the earliest games in the series. 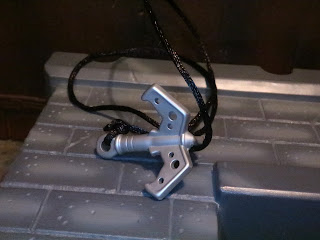 * Lara also comes with a really cool grappling hook. It's pretty sturdy and has a fairly long string attached, too. It interacts nicely with the included diorama piece, which I'll get to in a moment. 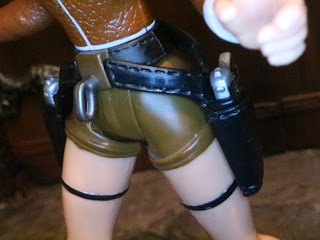 * The little hook on the front of Lara's belt is a carabiner like piece that you can use to attach her to the grappling hook. It swivels, I guess to make posing her in climbing and rappelling poses easier.  She also has functional holsters for her dual pistols that work really well. They're also very, very sturdy. 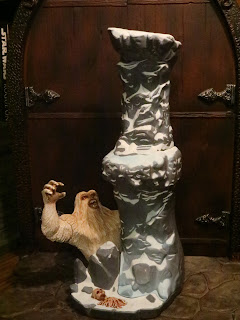 *  The Playmates Tomb Raider line offers up some very cool Lara Croft figures but it might best be remembered for the very cool diorama pieces included with each figure. This set features a 12 inch tall Himalayan mountain piece with a yeti reaching out from behind the base. It's a pretty impressive diorama and while there's not a lot of "play space" per say, it really is a pretty fun piece. Lara looks great with it but so do toys from other lines. If I recall correctly, it came in a few different pieces in the package (the yeti, mountain base, lower mountain, and upper mountain) and it popped together pretty easily. The paintwork really brings it to life and makes for a dynamic setup. Even if you weren't "playing" with this toy it still looked pretty cool just sitting on the shelf. 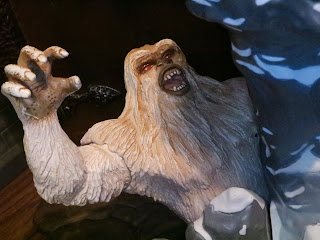 * The yeti is quite fierce looking and is positioned coming out of the rocks at the bottom of the set. The sculpt and paintwork are excellent, creating a creature that nicely mimics the look of those found in Tomb Raider 2. Yetis are always a winning inclusion in any toyline and this guy made a great foe for Lara. 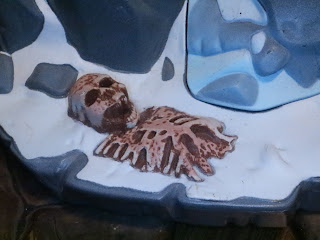 * At the base of the mountain display lies the remains of someone who wasn't as successful at navigating the ascent up the summit as Lara. The bones look old and worn, perhaps showing some teeth marks denoting these as a former meal for the yeti. 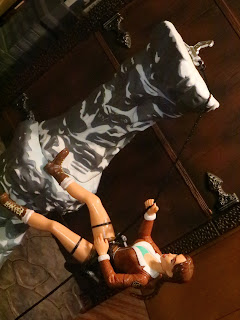 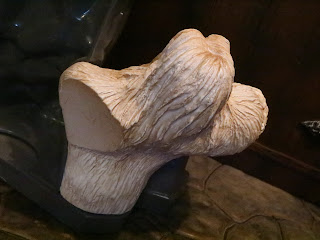 * One of the jokes that was going around when this set came out was that you only get half of a yeti, and I guess that's actually true. The yeti is a piece that snaps onto the bottom of the base and he has no left arm and no lower body. A full figure would have been really cool and much more awesome than just half a yet for sure. 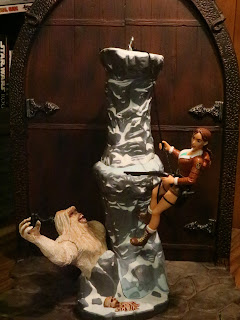 Legendary and mythical creatures are always fun for a few good scares and the yeti is a welcome addition to the Dawn of 31 Days of Toy Terror. In the late 1990s many companies were really racing to offer consumers the most value for their buck when it came to toys with many companies packing it cool dioramas and mini playsets with their releases. While Playmates doesn't seem to do much exciting these days (they don't even have a TMNT line out at the moment, right?) back in the 1990s they were beasting it with toys. The Tomb Raider line was incredible and Lara Croft Conquers the Legendary Yeti is an Epic piece from the line. Lara is a striking figure on her own, packed with some cool weapons, but the playset and really make her stand out. Sure the set might only be kind of spooky and not "all the way spooky" but I guess that's the best you can expect from half a yeti. Tomorrow things wrap up with a couple spooky reviews. The final day of The Dawn of 31 Days of Toy Terror and one more extra special Halloween review! Be back for a trick and a treat!

If you're a fan of Lara Croft make sure to check out my review of the Play Arts Kai Lara Croft.