The Dawn of 31 Days of Toy Terror: Silver Shamrock Trick-or-Treaters Three-Pack from Halloween 3: Season of the Witch by NECA 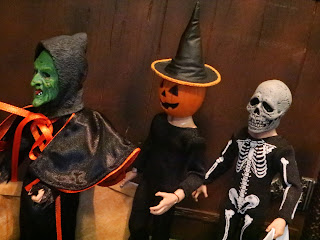 While "The Dawn of 31 Days of Toy Terror" is going to mostly focus on toys released before the year 2000 Saturdays are going to be a bit different as there are still some horror toys that have come out in 2020 that I gotta show off and there's no toy this year that has had me more excited for Halloween than this three-pack of the Silver Shamrock Trick-or-Treaters from Halloween III: Season of the Witch. Yes, Halloween III, which was released in 1982 (a year before I was born). What was once viewed as the bizarre outlier of the Halloween series has in recent years become a well loved horror classic. It's filled with some pretty cool imagery, too, and while I didn't see the film until about 15 years ago or so, seeing the box art definitely feels very nostalgic. The image of the silhouettes of the Trick-or-Treaters against that ominous red sky always stood out to me as a kid when I was at the video store. It seemed so terrifying and frightening, yet so evocative of Halloween night. I love the movie and I was thrilled when NECA revealed this boxed set. It's one of those dream toy sets for me and something I never imagined we would actually see. I've been sitting on these for quite a few months but I decided to hold them back for Halloween. Aren't you glad? Turn on the Silver Shamrock theme and tune in to this review.... 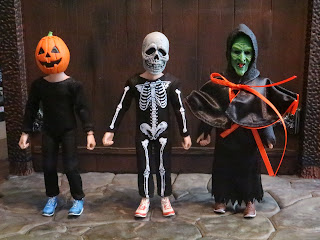 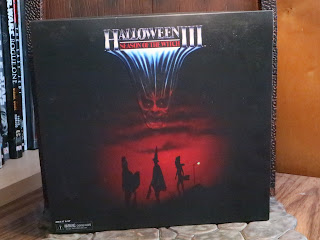 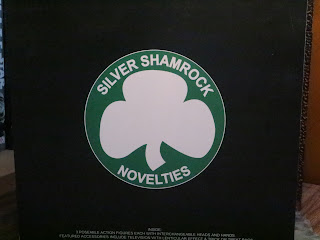 
* The packaging on this set is awesome. The front of the slip cover features the image from the photo above and the Silver Shamrock Novelties logo on the back. Once the slipcover is removed the figures are in a standard window box. 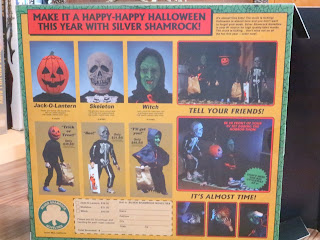 * The best part is the rear of the window box, It looks like an advertisement for the Silver Shamrock masks. This is amazing as it features some great images and cool details about the film masks. Brilliant work here! 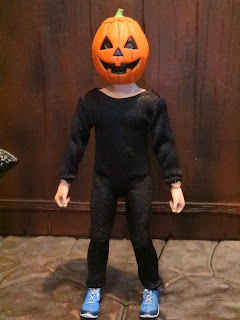 * Let's start by looking at the trick-or-treater wearing the Jack-O-Lantern mask. Rather than being standard sculpted figures like NECA typically releases, these are actually figures with real cloth outfits, kind of like modernized MEGOs or Mezco's One:12 Collective. They're also in the 8 inch scale, so since they're kids they come in at around 5 1/2 inches, though you could definitely work these in to your standard Halloween action figure display since they're shorter. The Jack-O-Lantern comes wearing a very simple black cloth outfit that looks and feels like a vintage Halloween costume and blue tennis shoes. 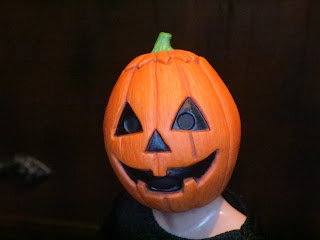 * The Silver Shamrock masks were designed by Don Post Studios and these sculpts actually look like masks rather than "real" faces. On the Jack-O-Lantern you can see the details of the mask like the places where a thinner material would be used for eye holes and the mouth. It's an excellent sculpt and is as high quality as anything you'd see in one of NECA's Ultimates releases. 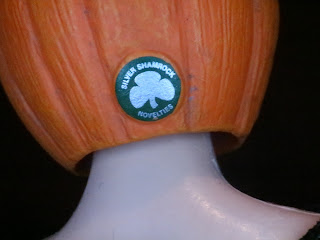 * The back of each mask in the set (not just the Skeletor and the Witch) features a very tiny Silver Shamrock Novelties tag. The Jack-O-Lantern also has a little silver shamrock on the right side. 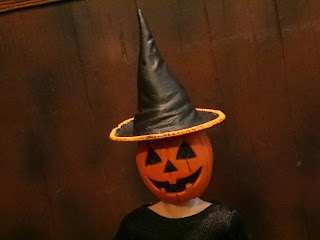 * The Jack-O-Lantern trick-or-treater is shown wearing a witch hat, so one is included with the set. The hat has a fantastic molded bottom that fits perfectly over the top of the Jack-O-Lantern mask, so it's very easy to keep it in place. 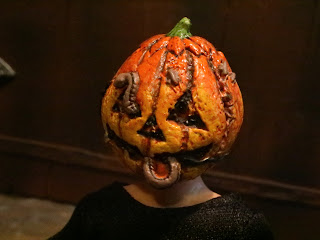 * Spoiler alert for a 38 year old movie: The plot of Conal Cochran, owner of Silver Shamrock Novelties, is that each mask carries a microchip inside which contains a fragment of Stonehenge. On Halloween night, when children watch the big Silver Shamrock giveaway, the program will activate the masks, causing the wearer to die and a variety of bugs and snakes and crap to come out of the mask and attack everyone nearby. To replicate this feature, a second head is included which shows the mask rotting with bugs crawling all over it and a snake working its way through the eye and mouth. Nasty! 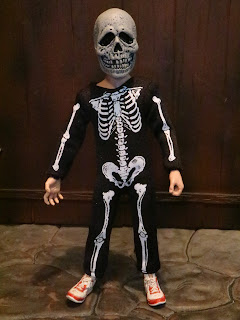 * The second figure in the set is the Skeleton. The Skeleton's costume definitely looks like a basic skeleton costume that so many of us probably wore at one point or another for Halloween, or maybe even as pajamas. I seem to recall having pajamas like this at some point. 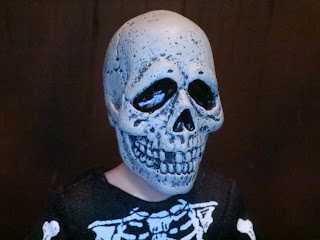 * The Skeleton mask is another Don Post Studios design and NECA's rendition of it really makes it look like someone wearing a skull mask and not just a sculpted skull. It's excellent and might be my favorite of the three in this set. There are lots of cracks and dents in the design. On the back you can also see where the latex separates to allow the wearer to more easily put the mask over their head. 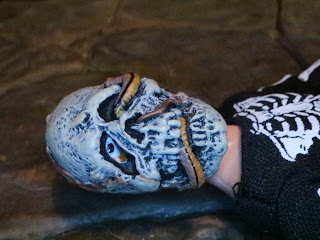 * Wow! This one is disturbing! You can actually see the wearer's eye in the right hole while a snake and a worm wind their way through the holes in the mask. More wonderfully grotesque for your Halloween shelf. 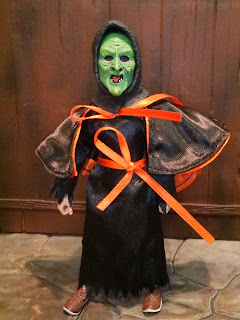 * Last up is the Witch! The Witch has a far more complex costume than the other two figures, featuring a black robe with a orange hemmed mantle. Don't these costumes remind you of the random costume pieces you would buy as a kid and use over and over? I had quite a few black robes and I'd use them over and over for random costumes. Combine a black jumpsuit with a black robe and a hood and you were virtually invisible and felt invincible! 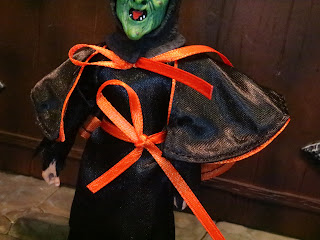 * The Witch's belt is a ribbon, so you can retie it if you need to, and the mantle has a wire in the edge for posing. The clothes are nicely tailored and really do look and feel like Halloween costume pieces. 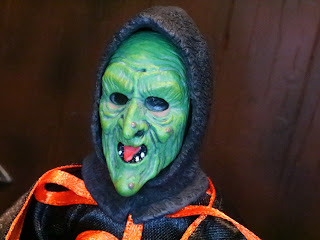 * The Witch mask is actually two separate pieces, though I think that's part of the toy and not reflective of the actual mask. The movie mask and the various replicas you can purchase seems to be a latex face with a fabric hood. The Silver Shamrock Novelties logo is shown on the hood (probably sewn on). The paintwork is really nice on this with some gray shading to highlight the texture of the skin. 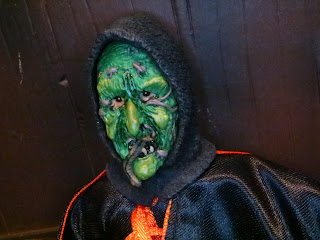 * You can see both of the Witch's eyes here, which makes the "activated" mask even more terrifying. Yuck! Look at all of the stuff coming out of it. I love Halloween III because of it's atmosphere, music, costume designs, and yes, because of it's crazy, nonsensical plot. So Conal Cochran's plan is to make Halloween great again by killing kids on Halloween night with the power of Stonehenge? Why? Apparently it's to bring about a return to witchcraft through a mass child sacrifice. Again, the movie is bonkers but really, really fun. 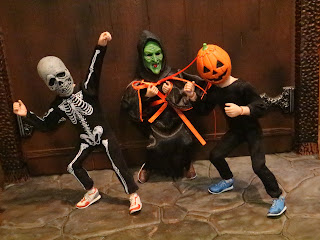 * These Trick-or-Treaters are really quite well articulated. The move nicely, even under their costumes, and they should be able to take nearly any pose you want. The arm articulation is excellent and you can get some crazy poses with the Trick-or-Treaters clawing at their faces. I do wish the ankles were swivel/hinges instead of just swivels but it's honestly not a huge deal. 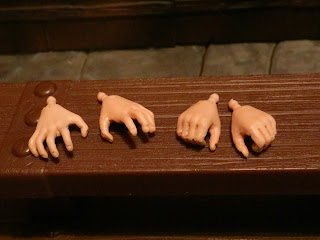 * The set comes with four hands for each figure: A pair of standard gripping hands for holding their treat bags and a pair of grasping hands for clawing at their masks in terror. Overall you get twelve hands, with the figures wearing six of them in the package. 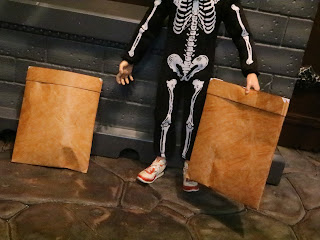 * There are three treat bags included for the Trick-or-Treaters. Two of them are supposed to be regular paper bags like we used to get at the grocery store back in the day. They're waxy, which gives them a nice look, and they really hold stuff, too. You could wrinkle them up a bit and stuff them with some little trinkets to really liven up your display. 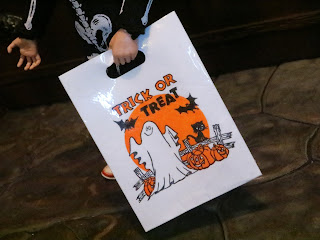 * The third treat bag is this cool oversized plastic bag with a fun little Halloween seen on it. It's very similar to the other bags but with more of a slick look to it and a functional handle. Be careful as you could definitely tear these if you get rough with them. 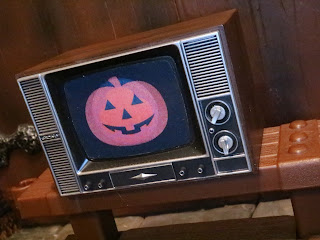 * The final selling point of this set is the television. It looks like an old wood paneled console television with knobs and dials. It's also displaying the orange flickering pumpkin from the Silver Shamrock Halloween commercials. 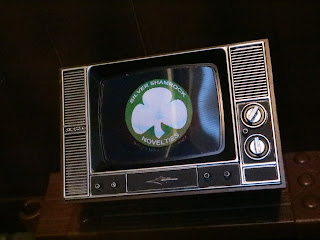 * The screen is a lenticular, so when you tilt it you can see the Silver Shamrock Novelties logo as well. I really wish it played music, but it doesn't. 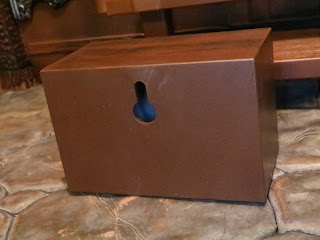 * On the rear of the TV is a little slot so the accessory can be mounted up on a wall or side of a shelf. That's a really smart idea! 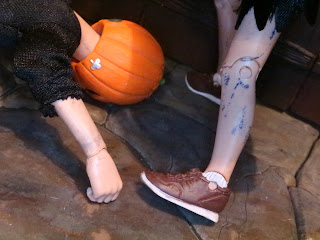 * All that glitters is not gold and just like the film itself, the set does have its share of flaws. The first is that the costumes have stained the figures underneath. There's really no reason you have these figures displayed without the costumes unless you're doing some customizing but it's still an oddity of what NECA has done with the line. I had the same problem with their Snake Plissken back in 2015 and I'm kind of bummed they haven't figured this out yet. 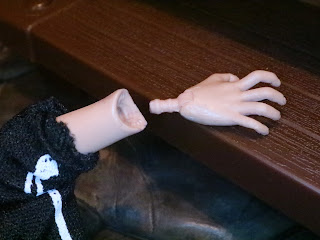 * The hands are really tough to change. You may need to use some heat to soften things up a bit, but be careful. 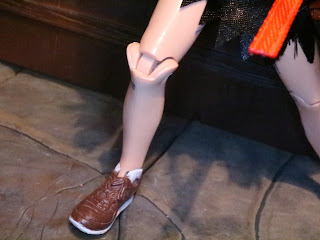 * I noticed some weird issues with standing up the Witch and found out that the lower leg was falling off. I got it back on but it does seem like it's not attached properly. I rarely have quality control issues on NECA product these days but this one is definitely an example of one. 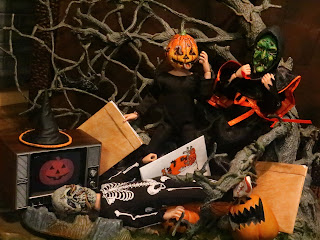 This set definitely has a few flaws but once you get it set up and on display they're barely noticeable. This is amazing. It's really one of those toys that I've thought would be cool to own but that I never imagined would really happen. While I can't see NECA ever going very deep into the Halloween license (it's just not that kind of film series) they do seem to be hitting the highlights from a few of the best loved films. This is an Epic set that should make for an amazing display on your Halloween shelf. It's not Michael Myers, but it's still pretty amazing.