The Dawn of 31 Days of Toy Terror: Lava Planet Predator from Aliens/ Predator by Kenner 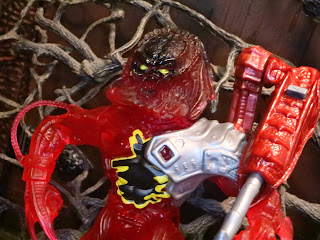 Last year during The Scream of 31 Days of Toy Terror I reviewed Kenner's 1993 Cracked Tusk Predator. Last year's theme focused on movie based horror toys and so the Cracked Tusk Predator, even though he was a Kenner creation, was selected to represent the Predator films. Since The Dawn of 31 Days of Toy Terror focuses on nostalgia and toys made before the year 2000 I'm returning to Kenner's Aliens and Predator line with a look at Lava Planet Predator. The Lava Planet Predator is another Kenner creation (one NECA has revisited, too) although one that I didn't pick up when it was originally released. I was way more interested in the Aliens and Space Marines at the time and the Predators kind of passed me by. I started recollecting Kenner's Aliens/ Predator lines in 2013 and I actually completed my collection earlier this year, so I've had a good opportunity to reexamine many of the figures I missed as a kid. Lava Planet Predator, while a simple repaint, is now one of my favorites from Kenner's toyline. I'm not sure what the rational for a translucent red Predator is but he sure looks fantastic, doesn't he? Maybe it's intended to be the Predator seen through thermal version on a volcanic planet like Mustafar? Maybe he now has the high ground? Make up your own terrifying tale of Predator terror involving the Lava Planet Predator as we prepare for another frightening toy review.... 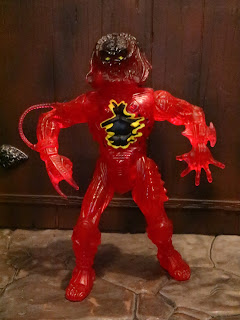 Accessories: Mask, chest harness with cannon, and a misisle. 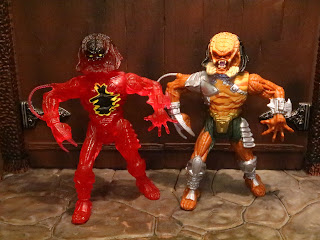 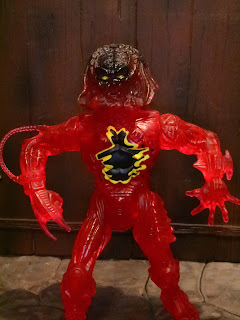 * While Lava Planet Predator planet is a reused sculpt he looks quite different from the Cracked Tusk Predator due to being molded in red, translucent plastic. Heck, he stands out from nearly every other Predator in Kenner's toyline due to this. While it's a weird variant it's also an incredible eye catching one. In my younger days I may have scoffed at such a bizarre repaint that looked so unrealistic but now I find myself loving the bright color used. Throw in the black and yellow pattern on his chest and you've got a real winner here. Lava Planet Predator just looks incredibly cool! His translucent quality is fantastic and when he catches some light he looks even better. 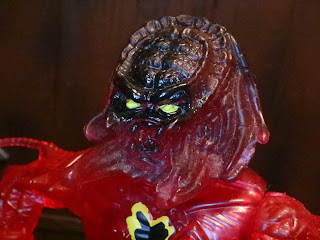 * While the details on the Lava Planet Predator's head might be more difficult to make out due to the translucent plastic Kenner was wise enough to give the Predator's face a black paint spray to help bring out the detail. Add in the yellow eyes and you've got a pretty intimidating figure. Maybe he's using the cloaking technology on a volcanic planet and this is what it looks like? 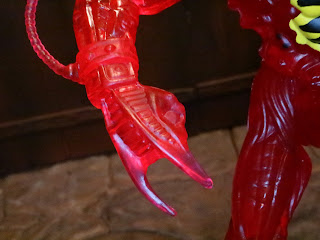 * While there aren't any painted details here I still really love the spiked gauntlet on the right forearm of the figure. The weapons sculpted on to some of Kenner's Predator figure are often better than the actual accessories they came packaged with. 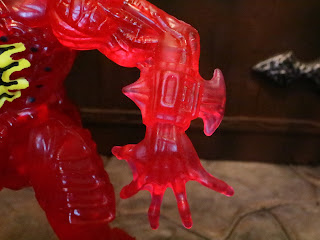 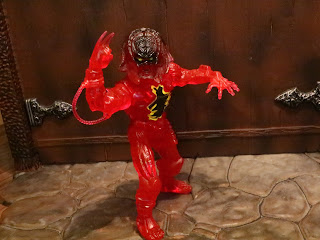 * Lava Planet Predator is sturdy and features the five points of articulation you would expect from a 1990s Kenner figure: Swivel shoulders, swivel hips, and a swivel head. He stands pretty well on his own, too, even being in a bit of a pre-posed stance. 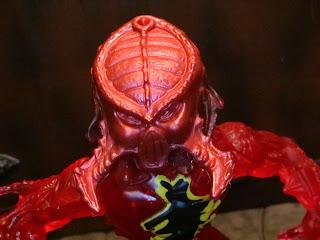 * He also shares his mask with Cracked Tusk Predator but it's cast in metallic red now. It looks pretty sharp, too. I love the exaggerated mandibles on the mask! 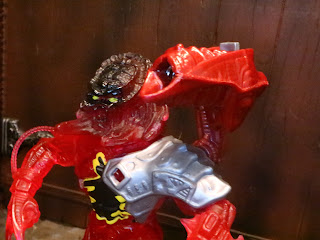 * Lava Planet Predator also comes with a weapon that's kind of like the Predator's standard shoulder cannon. It attaches to his left shoulder and features the cannon mounted on a post, giving it two swivel joints so it can be aimed. Without the missile in it, it makes for a pretty cool looking weapon very reminiscent of those seen in the movie. 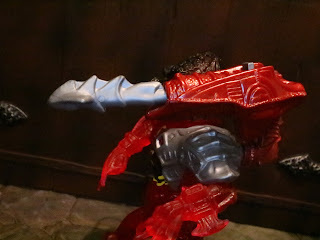 *  Rather than looking like a bolt of energy or something, the missile looks like a harpoon of sorts. It fires pretty far and does look kind of cool. While Cracked Tusk can't hold it, other Predator figures could wield it on its ow. 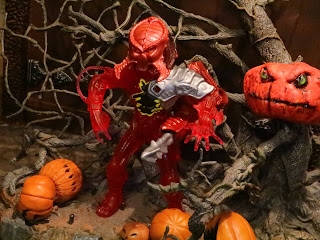 I really love the Cracked Tusk Predator figure and while this guy is a repaint, the funky color scheme makes him equally as good, just in a different way. While Cracked Tusk would be my go to Kenner Predator, this guy is easily the most visually captivating in the line. I remember it being kind of exciting when the Predator figures joined the Aliens line (even though I was a bigger Aliens fan at the time) and the Kenner line still stands as a pretty notable toyline for horror toys. Kenner brought sci-fi/ horror toys to the masses in the 1990s and my 10 year old self was thankful for that!