Minifigure Review: Beast Man from Masters of the Universe Eternia Minis by Mattel 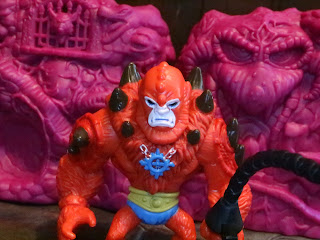 Did you enjoy checking out the first series of Masters of the Universe Eternia Minis from Mattel? Then it's time to check out series 2! I actually found these at the beginning of September but with lots of MOTU stuff out right now (along with working on 31 Days of Toy Terror) it's taking me a bit longer to get to new stuff. While the first series of figures come in little plastic Castle Grayskulls the second series of minifigures come packaged in little plastic Snake Mountains. That's pretty cool, right? I love the purple color of these! They really jump off the shelves. Like the first series, these are not truly blind packaged as there is an identification letter on the bottom of each Snake Mountain so you know who you're getting if you know the code. That's pretty cool and preferable to these being truly blind packaged. Anyways, Beast Man was released in the previous Masters of the Universe Minis line (packaged with Zodak) from 2014 but this one actually has quite a few differences. Let's check out this new Beast Man after the break... 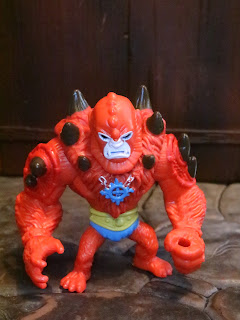 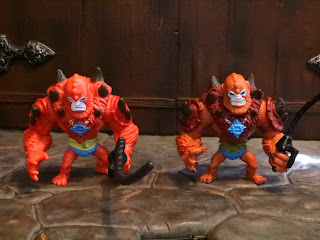 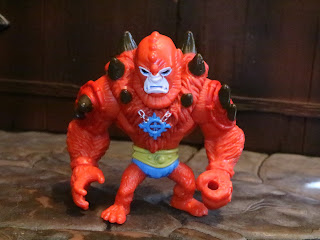 The Positives:
* Beast Man really does look quite a bit like his vintage toy, only more manacing and more beastly. He's got a good sculpt and quite a few paint applications, including the chain for his medallion and the spikes on his collar and arm pads. Those are painted details that even the new MOTU Origins figure doesn't have! 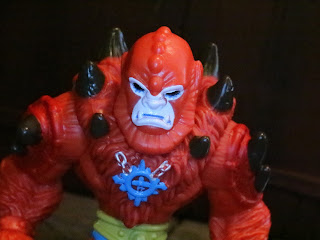 * The headsculpt is good. Heck, it's better than the vintage figure's headsculpt. The blue tattoos/ face paint aren't as prominent but the teeth, beard, and the ridges on the top of his head are quite sharp. 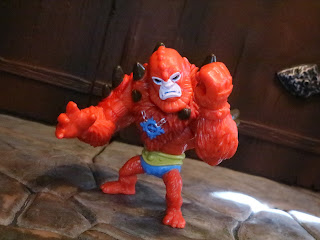 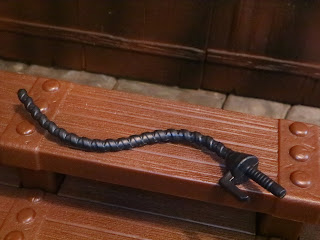 * Beast Man comes with his whip which has always been his go to weapon. The whip is different than the 2014 MOTU Minis Beast Man's whip and looks more like the vintage accessory. The whip looks braided, which is kind of cool, and it fits really nicely into Beast Man's hand. 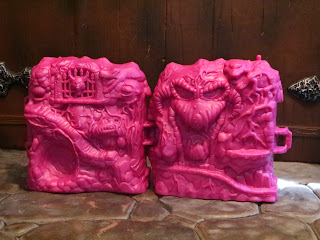 * The Eternia Minis come blind packaged but it's actually not a bad thing at all. First, there is a very prominent code on the bottom of the package identifying the figure inside (Beast Man is "E"), so you don't have to buy these without knowing what you're getting. Second, the packaging is a very cool plastic Snake Mountain. It actually separates in half and you can connect them with other Snake Mountains to make a long chain of evil. It's a cool sculpt and some of the best blind packaging I've ever seen. The detail is insanley nice on this! 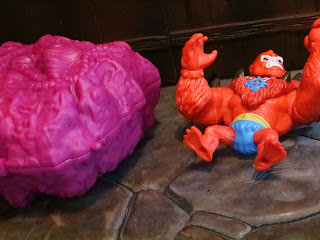 The Negatives:
* There are foot pegs on the top of the Snake Mountain display base but Beast Man just won't fit on top well. Is the problem with Beast Man or is it with Snake Mountain? I'm not sure but I've had a couple figures from series 2 who want to fall off the base pretty easily, so maybe it's an issue with the pegs on this series. 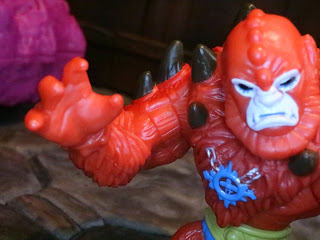 * The paintwork on Beast Man's arm pads looks great on the outside but the interior arm bands aren't painted at all. They're the same color as Biff Beast Man's fur! Lame! 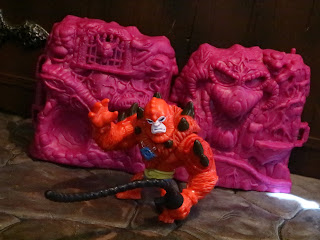 Beast Man is a really cool figure though he does have a few problems that keep him from being the definitive Beast Man minifigure. I love the overall look of Beast Man (his colors are quite vibrant) and his Snake Mountain base is very cool, though it stinks that he can't stand on it. He just wants to keep tumbling off! Beast Man is a Good and a 1/2 minifigure and while he's not the best in the series he's not a dud. I think the MOTU Minis version is better (that one came with more accessories, too), but this one is $5 bucks and you can pick him up when you're out at Walmart buying hand sanitizer, Bagel Bites, and Taylor Swift's Folklore.

I've reviewed so many Beast Man toys that he now has his own review archive. Check out Beast Manor for lots of reviews of Skeletor's favorite flunky!
For more reviews from Mattel's Masters of the Universe Eternia Minis check out the following:
Buzz-Off
He-Man
Horde Zombie He-Man
Jitsu
Man-At-Arms
Ram Man
Skeletor
Trap Jaw