The Dawn of 31 Days of Toy Terror: The Hunchback Playset from McFarlane's Monsters by Mcfarlane Toys 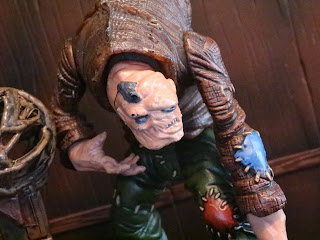 Today's installment of The Dawn of 31 Days of Toy Terror is The Hunchback Playset from McFarlane's Monsters. Released in 1997, McFarlane's Monsters is one of my favorite toylines and I've reviewed a few of the sets previously, including the Werewolf Playset back during the original 31 Days of Toy Terror. For McFarlane's Monsters McFarlane Toys went smaller with their figures, including two figures and a diorama like playset in each set. The Hunchback of Notre Dame set was the first set I found of these and it definitely seemed to be the least popular of the sets. I'm not sure if that had to do with the fact that the Disney film had come out the year before or just because Quasimodo is such a strange choice for a monster line. As I've said before, he's not a monster despite appearing in a Universal film. Maybe the implication is that the vicious executioner this set comes with is the true monster and Quasimodo must overcome him! I remember getting this set in late August or early September of 1997 on a short trip to visit my grandparents. There really wasn't anything on toy shelves quite like this at the time of its release... 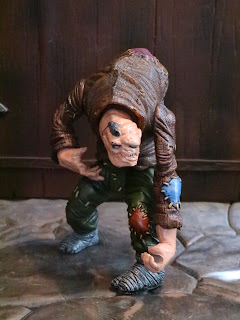 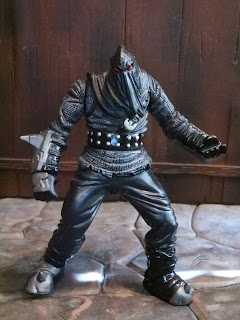 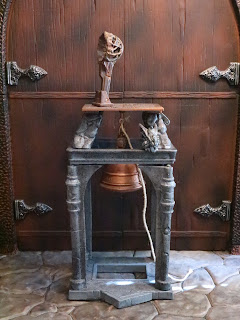 * The playset itself represents a clock tower of the Notre Dame cathedral in Paris, France. This is clearly just a representation as it's way smaller and way less elaborate than anything from the real cathedral. That being said, it does make for a very cool display piece for 1/18th scaled figures. The tower is just a little over 7 inches tall and has a four pillars which lead up to a structure supporting the large bell. There's a small wooden platform on top that holds a crude catapult as well.

You'll notice in some of my pictures that the top of the structure looks like it's coming off. A few years ago something happened and the pegs holding the bell tower snapped off. It still stays on but it is a bit wonky. This was totally my fault and not a fault of the toy. Many of the McFarlane toys from this era had some quality control issues but this wasn't one of them. 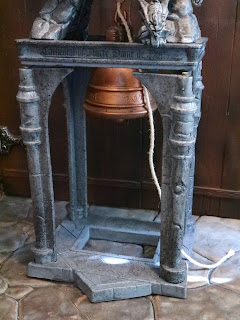 * The pillars are very nicely detailed, showing off some very respectable Gothic architecture. The middle of the base has a hole, presumably leading down to a stairwell or ladder where the bell tower can be accessed. 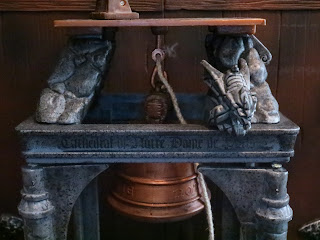 * The bell housing has "Cathedral of Notre Dame de Paris" written on the two longer sides while "Notre Dame" is simply written on the shorter sides. It might be incorrect ("of" and "de" in the same phrase?) but it looks cool. There's also a grotesque that can be moved around wherever you'd like to place him. 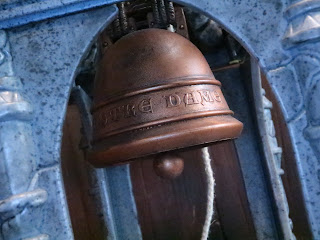 * The bell is really cool. It looks like it's made of bronze and it too has the words Notre Dame molded onto the bell. There is an actual string which allows the bell to move and the working clapper to hit the sides. It doesn't actually make any noise louder than the plastic hitting plastic sound but it's a cool feature. 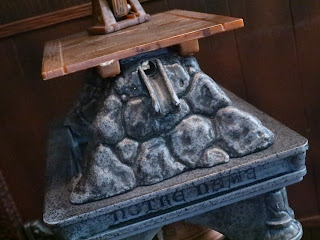 * On what side is what I thought was a water spout but, after looking at McFarlane Toys' excellent archive I realized that this is meant for the rope for the bell to slide through. Oops! 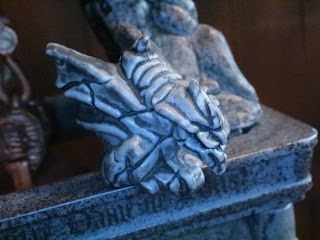 * Here's a close-up of the little grotesque. It's a loose piece and it balances where ever you'd like. It would have been cool if it had been able to attach securely to a few spots, though. It also would have been nice to have a few grotesques and/or gargoyles up here. Honestly, an articulated large gargoyle would have been way cooler than the included Executioner figure. 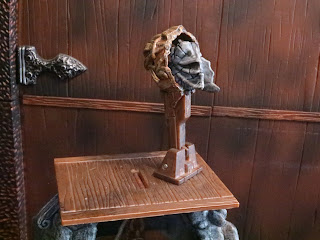 * On the very top of the tower is a wooden platform with a crude catapult on top. It uses an interior spring to launch the grotesque (or any other spare stuff you have strewn about). 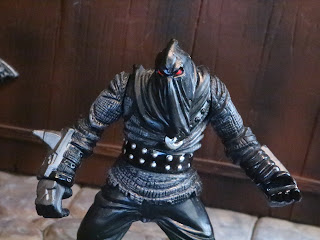 * The included Executioner is a pretty cool figure. As best as I can tell this is a McFarlane creation but it does look great and adds to the grisly, Gothic atmosphere of the set. The sculpt is really good with lots of details. This definitely is the kind of stuff McFarlane's sculptors lived for at the time: Exaggerated medieval armor, black leather and studs, giant boots, etc. 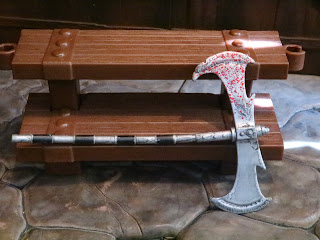 * The Executioner's massive double bladed ax is quite terrifying! Check out those blades. The blood splatter on one blade definitely tells you that this guy isn't just walking around like this for fun. He's a bad person! With an ax this big, he's probably overcompensating for something, too. 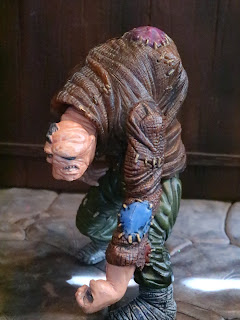 * Quasimodo, the titular hunchback of Notre Dame, is another grotesque looking figure that captures many of the McFarlane tropes of the time. They loved producing figures of characters with physical deformities and asymmetrical bodies. While Quasimodo doesn't have oversized boots he does have a rather nicely detailed and painted outfit. I love the patches sewn onto his tunic! 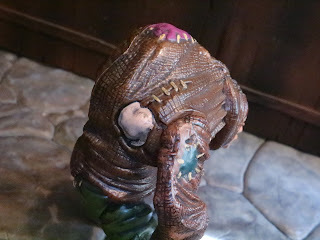 * His hump is also huge. How does this guy walk? The little bit of his flesh poking through the back of his tunic is also a pretty gnarly little detail. Poor guy, you know? 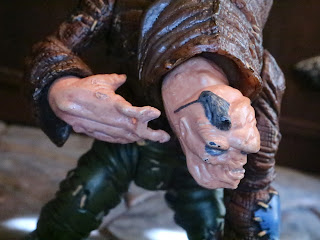 * Unfortunately, Quasimodo's hand and head look gloppy. Not grotesquely sculpted or anything, but just gloppy. The details kind of seem to have melted away, almost as if this was a wax candle that had been burnt for a bit and then blow out. 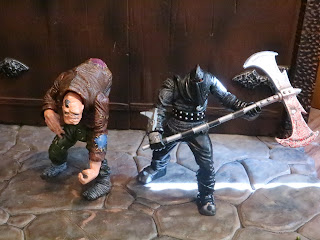 * Quasimodo and the Executioner are both largely pre-posed. Quasimodo actually has a decent amount of articulation, though, and you can get a few poses out of him despite the limitations due to his physical disability. The Executioner is a statue from the waist down, though, and mostly can just raise and lower his arms. He's really here to look menacing and to get pummeled by Quasi. 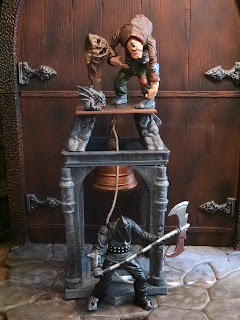 Todd McFarlane and McFarlane Toys definitely pushed the envelope in the action figure industry in the late 1990s. Whether it was action figure scale, detail, realism, good taste, or just the amount of plastic that could be fit into a package, the Toddfather kept innovating things and McFarlane's Monsters was a really cool line that helped bring about more display like action features with diorama like elements to them. While the Hunchback Playset is my least favorite of the series 1 playsets, it's still pretty cool. The detail is overall quite nice and while it's not as fun as the other sets, you did get a good guy (Quasimodo) and a bad guy (the Executioner) to duke it out. More gargoyles and grotesques would have been great, though. This one gets a Great rating from me and the whole line is definitely pretty nostalgic. Man, where do we go from here in the late 1990s? You'll see! Stay tuned....

If you dig Quasimodo then make sure to check out my review of the Diamond Select The Hunchback of Notre Dame from their Universal Monsters Select line.