Minifigure Review: He-Man from Masters of the Universe Eternia Minis by Mattel 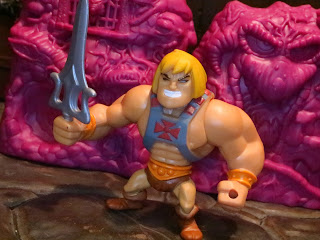 Today I'm checking out another figure in series 2 of Mattel's Masters of the Universe Eternia Minis and this time it's He-Man. Yes, another He-Man. Hey, listen, you're talking to a guy who owns at least 100 He-Man action figures and such, so I should be OK with that, right? Well, here's the thing: This is the exact same figure as the series 1 He-Man. That's pretty lame, right? Yeah, this is mostly going to be a few paragraphs of me complaining about a really poor decision. Listen, I have no problem with companies repacking a popular character every now and then but when it's the second series of a blind boxed line? That's just really strange. Could Mattel not think of any better He-Man variant? Heck, they at least could have given him different accessories or something. Ugh. Pure laziness here, folks. Let's take a look at this one after the break... 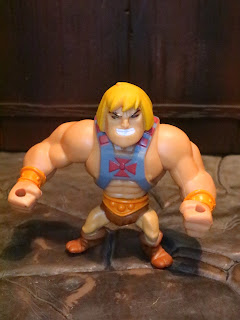 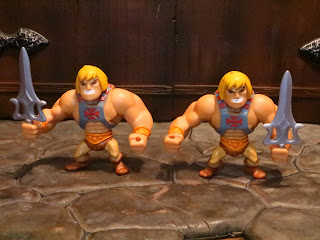 * On the left is the series 2 He-Man and on the right is the series 1 He-Man. They're identical. Seriously, if you have one avoid the other. I didn't know which codes went to which figure so I bought a full set not realizing which package was He-Man nor knowing that they were exactly the same figure. Heck, the standard silver or gold variant would have been better than a straight up duplicate. 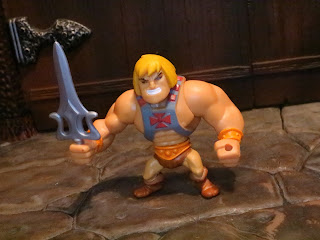 * I'm starting with the negatives first: This is the same figure you already have if you bought series 1. Mattel couldn't even be bothered to offer up a cool new palette swap. If you were a loyal customer who bought series 1 then Mattel is only too happy to get you to double dip with series 2. Lame. 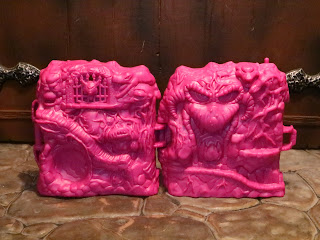 * The Eternia Minis come blind packaged but it's actually not a bad thing at all. First, there is a very prominent code on the bottom of the package identifying the figure inside (He-Man is "G"), so you don't have to buy these without knowing what you're getting. Second, the packaging is a very cool plastic Snake Mountain. It actually separates in half and you can connect them with other Snake Mountains to make a long chain of evil. It's a cool sculpt and some of the best blind packaging I've ever seen. The detail is insanely nice on this! 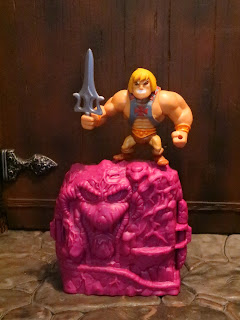 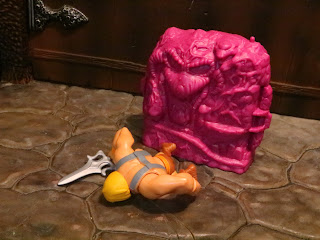 A number of years ago I had came up with a list of my action figure No-Nos and one of them involves a collector having to buy a duplicate figure. I know that duplicates are an inherent part of the "blind box" marketing gimmick (which needs to go away) but, considering that Mattel put a duplicate figure in the second series which uses letters to help you avoid duplicates, that seems awfully close to the spirit of one of my No-Nos. This is a pretty Crap 1/2 move, Mattel. Seriously, a weird He-Man repaint would have been better than this nonsense.