What's up all you groovy ghouls and ghosts out there? This week's installment of Barbecue's Bonfire is filled with my adventures this week. We've got horror films, horror TV shows, Harry Potter and the Goblet of Fire, room escape games, and more. Not much more, but a little bit more. Halloween is coming and I'm trying to make the most of every day. How about you? Your old pal Barbecue also bought a new Halloween costume this week. Anyone want to take a guess what it might be? I'll give you a hint: It's a costume of a character who has appeared previously on 31 Days of Toy Terror! Let's check out what I've been up to this week... 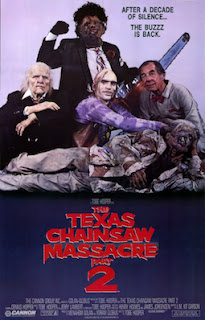 After a stream of largely family friendly Halloween movies last week this week I made sure to watch something with a bit more teeth. I had never before seen The Texas Chainsaw Massacre Part 2 so I rectified that this week. All I can say is...wow. This is a strange, strange movie. Not a bad movie, if you like gory over the top stuff, but not a great movie either. Just... weird. Considering that it's directed by Tobe Hooper, the director of the original 1974 horror classic, the tonal shift between the two films is truly jarring. While the original film is straight horror with minimal blood and a frightening, subdued feel, this one is an over the top black comedy with lots of violence. It almost feels like a parody of the first film! There are some good aspects of the film. First, Moss Man makes an appearance! He's chilling out in the booth of a radio DJ. Dennis Hopper as Lefty Enright, a former Texas Ranger and the uncle of characters killed in the original film, is also a treat. NECA seriously needs to give us a figure of Lefty toting around three chainsaws ASAP! Despite how violent things get, the Sawyer family is kind of played for laughs, striking an odd balance between menacing and bizarrely charming. If you like the cheesier Elm Street films or stuff like Evil Dead, Dead Alive, and other splat-stick, give it a watch.

More frightening fun after the break... 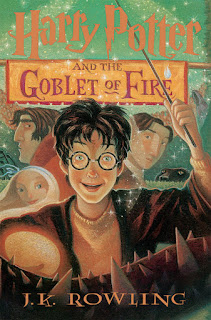 My daughter and I have reached another step on our read through of the Harry Potter series as we finished Harry Potter and the Goblet of Fire on Sunday evening. I first read this one during the summer of 2003 which is when I finished reading a friend's copy of Harry Potter and the Chamber of Secrets and then tore my way through books 3 and 4. I hadn't read it since so it was really fun to revisit. This one is fantastic. From my reread I still think PoA is my favorite book but I'd put this one in second place now. Reading these with my daughter, it's interesting to see how she focuses on  different things from the books than I do. When I first read this I was just out of my freshman year of college and was closer in age to the older Triwizard Tournament champions. Now I'm a parent (and a godfather, as well!) and identify much more with the adult characters, having a different perspective on what is of the most importance. While they're fantasy books, J.K. Rowling writes the Potter series as mysteries which really keeps you turning the pages. In an era when so many movie and TV show storylines seem hastily thrown together it's always impressive to see how tight and satisfying Rowling's storylines and conclusions are. 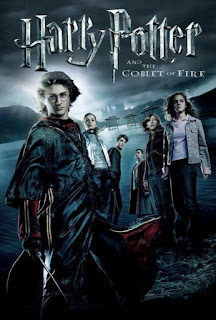 Of course, since we finished the book we let my daughter finally watch the 2005 film adaptation Harry Potter and the Goblet of Fire. While it feels like less of a mystery story than the book, it does end up being a pretty solid adaptation. It's a longer film (a little over 2 1/2 hours) and while it still cuts out a lot of the book, it doesn't feel like anything of true importance is missing, unlike The Prisoner of Azkaban. Director Mike Newell does a very fine job of giving everyone plenty of screen time while allowing for some extended action scenes to break up the character heavy story. This is the first time we get to see Ralph Fiennes fully as Voldemort which is pretty intense. My daughter has been rotating the first three films non-stop (Chamber of Secrets is her favorite) so I'm curious to hear her thoughts on this one once she watches it again. She loved the Yule Ball but was upset that Winky and Dobby were cut out. I like Barty Crouch Jr. slightly expanded role. More David Tennant is always a good thing and while his portrayal of Crouch Jr feels very different from that written in the book, it works. Brendan Gleeson is also a fantastic Mad-Eye Moody.

I'm a huge Escape Room enthusiast. I've been playing the computer versions since at least 2003 and I've played and completed multiple real-life escape rooms as well. I also love playing some of the board game versions, my favorite series being The Unlock! series from Space Cowboys. I recently got the newest set of three adventures, Epic Adventures, for my birthday and this week me, my wife, and my daughter decided to give one of the rooms a go. We played the easiest room in the set first which is a black and white horror movie themed adventure called "The Seventh Screening." You play as a movie goer watching the film "The Werewolf's Final Night" who is drawn into the action. The gameplay goes back and forth between you solving some puzzles in the theater as the viewer and determining what happens on screen. We solved this one in about 53 minutes thanks to some help from my daughter, who is getting to be really good at these types of games. The Unlock! series uses a combination of a deck of cards and a phone app (we use my wife's since I don't own a smartphone) to create a fun mixture of gameplay opportunities. If you're familiar with the Unlock! series, this one introduces a challenge by not labeling items you need to combine. Since the "film" is black and white, the color designation is missing. There are some clever puzzles in this one, including a part where the team briefly splits up and a Scooby-Doo like trap sequence. 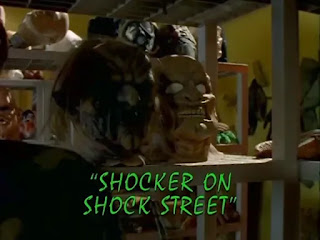 On the still spooky side we also watched the Goosebumps episode "Shocker on Shock Street" from 1997. Based on the 1995 novel A Shocker on Shock Street, this is a short tale about two kids visiting a new theme park attraction that their father's special effects company has developed. I don't remember reading this book as a kid but my daughter and I did read a few chapters of it a year or two ago before moving on to something else. This episode has a lot of creepy creatures, an amusement park ride gone wrong, and, of course, a twist ending. 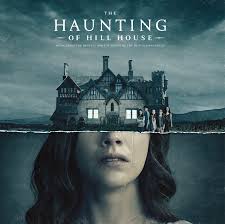 While it's already been out for 2 years, my wife and I just started watching The Haunting of Hill House, a loose adaptation of Shirley Jackson's book. We're only 2 episodes in but so far it's quite good though quite depressing. It's eerie but not as scary as I'd heard. Still, I'm enjoying the way the story jumps back and forth between the family who lived in Hill House in the 1992 and the events transpiring to bring them back in the present. The 1992 segments have a lot of TMNT references (I think I saw Mutagen Man) which gives this week's installment of Barbecue's Bonfire a bit of a theme: Vintage toys in horror films. The show isn't what I'd call "fun" horror but my wife is really into it so I imagine we'll finish it up.
Last, but not least, let's check out the most popular stuff this week. Lots of cool stuff here including some from The Dawn of 31 Days of Toy Terror. Starting from the top we've got...
P-1000 from the Fortnite: Legendary Series is on his fourth week on the list and he's on top! This is a variant version Peely after he was turned into a smoothie and rebuilt as a robot. And no, I didn't make that up. The Fortnite releases seem to be pretty popular, don't they? I was a bit disappointed in this guy due to his limited articulation and inability to hold his accessories but he sure is cool looking.
Beast Man from Masters of the Universe Origins is a newcomer to the list and he's shooting up the charts. Who doesn't like Beast Man? Well, Skeletor for one. He seems to truly loath the guy. I guess the Heroic Warriors also probably hate him. Evil-Lyn? She won't give him the time of day. Sheesh. It must be hard being Beast Man!
Mighty Max Slays the Doom Dragon is on its second week and as one of my reviews from The Dawn of 31 Days of Toy Terror it's really exciting to see the enthusiasm for this one. I loved Mighty Max as a kid and I still love adding more sets to my collection. If you dig Mighty Max too, please let me know! I'd love to pull out more for future reviews...
Profit Director Destro from G.I. Joe: Classified Series is on his second week and continues to show us that while directing profits 8-EZ, it's lucrative for sure. The Classified Series is insanely popular and Profit Director Destro is one of my favorite figures in the line. He's smooth, savage, and ready to ...direct some profits, I guess. I can't wait for a themed Baroness to go with him!
Gung Ho from G.I. Joe: Classified Series is another G.I. Joe figure on his second week on the chart. I really want to like this guy but I found him kind of disappointing. Still pretty fun, though. He's the first series 2 figure I've reviewed. I've got Cobra Commander and Red Ninja coming soon, though!

Horde Zombie He-Man from Masters of the Universe Eternia Minis by Mattel is on his fifth week and while he's dropped a bit he's still here. He's the "chase" variant for the series 1 figures and is a really cool minifigure. Translucent green minis are just super cool! If you need one for your set hit me up. I might be able to help.

We've got one more week until Halloween Eve (so...All Hallowe's Eve Eve). Live it up, eat some of those delicious Witch's Brew Kit-Kats, and watch something with Vincent Price in it. Peace out!