Ferociously Furry February: Grizzlor from Masters of the Universe by NECA 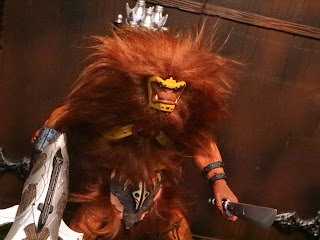 Today is the last installment of Ferociously Furry February, a month long tribute to Grizzlor, and I'm finishing the month up strong by checking out the NECA Grizzlor mini statue from 2006. I've talked about the history of this line before but it still fascinates and impresses me how NECA ad the Four Horsemen worked together to get these mini statues made. And yes, these really are mini statues rather than true action figures as they have no articulation. The popular fan word for these has been staction, a portmanteau of "Static" and "Action" referring to the fact that these are designed and accessorized to fit in with Mattel's 2002/ 200x toyline. When Mattel discontinued the line they had left out lots of important characters from the show as well as the Horde, most of the Snake Men, and some vintage characters who never made their way into the line. These are some of the most exciting MOTU products out there in my opinion as the Four Horsemen went all out with some clever redesigns of these beloved characters.  Grizzlor is one of my favorite stactions as the Four Horsemen really took the vintage toy and changed it up, making Grizzlor less of a wild animal and more of a terrifying hunter. I think he still captures everything I loved about the vintage toy but added a cunningness and intelligence to the character that made him a bit more chilling. Let's take a look at Grizzlor after the break... 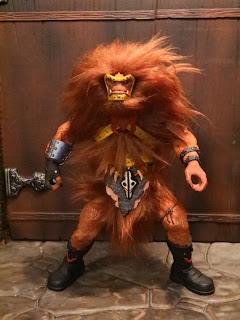 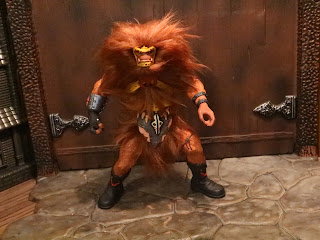 The Positives:
* Remember that these are not articulated! They're technically mini-statues, though they're in the same size and style of Mattel's 200x MOTU line so they display awesomely right alongside those figures. They're made from a similar plastic, too (not resin or polystone or anything) so they're usually fairly durable. They also did a nice job of delivering a nice job that allows these to be posed next to the 200x line without them looking out of place. 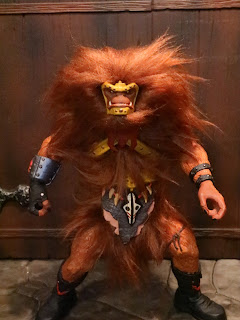 * Yeah, Grizzlor is still covered with brown fur and looks suitably terrifying, but he's also wearing a bit more gear this time around. He still has his harness with the Horde emblem (which apparently his life is somehow bound to, maybe like a horcrux?) but he's also got a really cool belt with a very unique and cool design that reflects his role as a hunter. The sculpting on his body is excellent and the way he's hunched over keeps him in line with the rest of the figures but clearly shows off how massive he is! 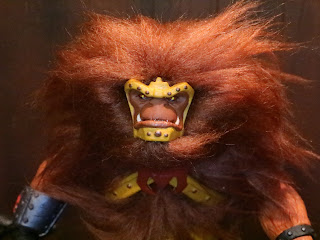 * Grizzlor's exposed face is smaller than you might expect but part of that is probably because his head is covered with fur. He kind of looks like Grizzly from X-Force! The harness around his head in interesting and his face and creepy little teeth are pretty menacing. 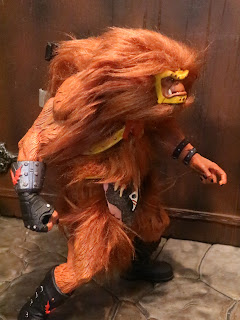 * What good Grizzlor figure doesn't have real fur, right? He is the Hairy Henchman of the Evil Horde after all. This Grizzlor has a nice layer of fur that you can style a bit to make Grizzlor look as well groomed or a wild and wooly as you like. 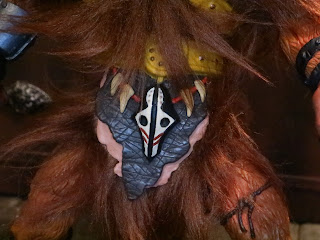 * Here's a close up of the very cool loincloth that Grizzlor is wearing. It's attached to a belt that is very similar to his harness but the loincloth itself looks like its made of various types of leather with a bone and tooth ornamented belt hanging from it. 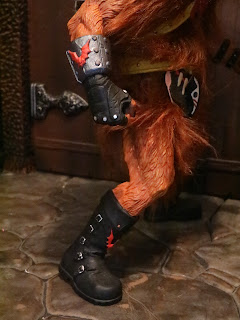 * Grizzlor's sporting some black leather and metal Horde adorned boots and bracers as well. This stuff seems quite sophisticated, contrasting with the wilder side of Grizzlor. 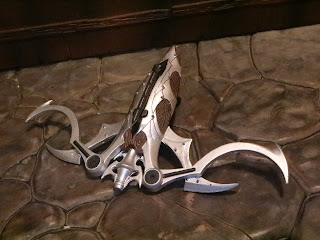 * The vintage toy's crossbow is pretty lame but this crossbow isn't. This thing is awesome! Check out the design and sculpt on this piece! It's sculpted with a bolt notched and ready (it's not removable) and while it's intended for Grizzlor's left hand it will fit in either hand. 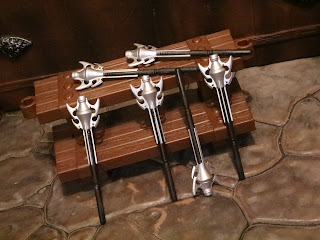 * Just for fun, Grizzlor comes with six additional crossbow bolts. They're all the same but they really look cool. Considering all of the unique stuff he coems with Grizzlor may have more accessories than any other MOTU figure I can think of except for someone with a deluxe series of costumes like Vykron. 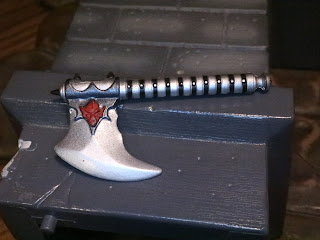 * Grizzlor comes with a mess of melee weapons, too. Let's first check out his nasty Horde emblazoned bearded axe! The paint work is excellent and it really does look like one sharp and nasty piece of metal, doesn't it? 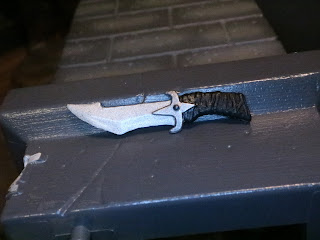 * For super close encounters, or for skinning and gutting is prey, Grizzlor comes with a wicked looking hunting knife. 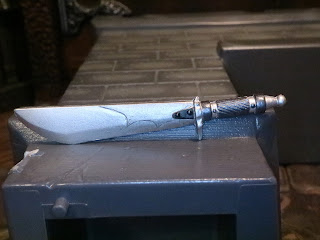 * When he's tracking his prey through the jungle or needs to deliver some up close and lethal blows Grizzlor is also packing a machete. 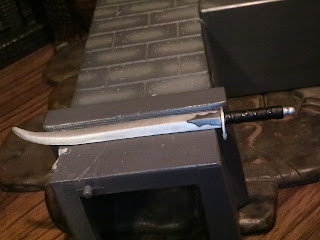 * Last, but not least, is a long sword. It's quite nice looking with a curved tip for extra cutting power, i guess. 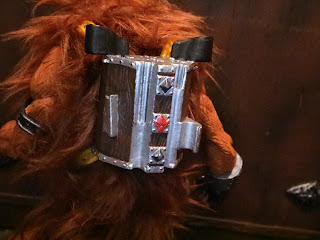 * Grizzlor's toting around a backpack that can store some of his gear. It's a mixture of wooden panels and a metal frame, complete with a Horde emblem in the middle. Hordak is sure all about branding and marketing, isn't he? 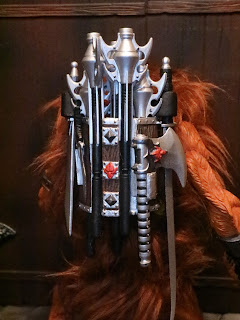 * Guess what? Grizzlor can hold all of his weapons except for the crossbow. All of them! The machete and sword fit into clasps on the sides, the knife fits over a small metal block on the left, the axe fits in a loop on the right, an the arrows fit into various holes and notches across the top. This guy is loaded! 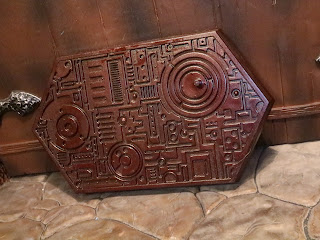 * Grizzlor can stand pretty well on his own but he still comes with a display stand with lots of technical details to keep him standing strong in Fright Zone. These figures are made from a sturdy plastic (with softer plastic details) so they're not incredibly fragile like you would think of a statue typically being. They're very similar in construction to NECA and McFarlane products from that era. 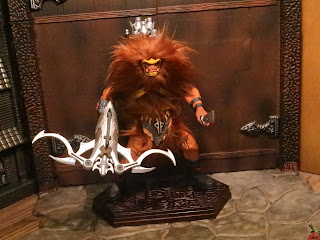 Grizzlor is definitely my favorite of the Masters of the Universe "stactions" from NECA that I own. I love his redesign, the overall look of the figure, and the absolutely crazy amount of weapons he comes with. I mean, my gosh: This isn't even a functional action figure and he comes with more weapons than most other toys in existence. The Four Horsemen and NECA put a lot of love into this line and it still holds up really well even now, 15 years later. I really hope that the upcoming Mastersverse line from Mattel can offer us some exciting new interpretations for the MOTU crew like NECA and the Four Horsemen did in this line.