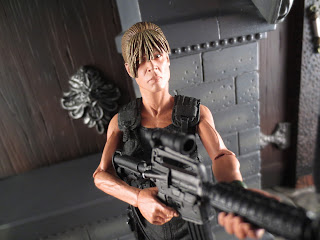 I couldn't even begin to tell you how many Terminator action figures have been made. Kenner released an awesome kid-focused line back in the early 90's (I'm pretty sure a smaller company like Toy Island released a figure or two as well) and McFarlane began releasing collector targeted figures in Movie Maniacs in the late 90s/ early 2000s. In more recent years Playmates created one of the ultimate peg-warming action figure lines for Terminator: Salvation while Funko's ReAction brand has released a few so-so figures from the original two films. Of all of the action figures relased for the series, NECA's efforts have definitely been the best. Of course, they still hadn't tackled Sarah Connor or John Connor, arguably the two main characters of the entire series. Finally, with the release of this figure as part of NECA's Ultimate Reel Toys range of figures, we can mark Sarah Connor off the list. Well, a T2 Sarah, anyways. Packaged in a cool five panel box, this version of Sarah Connor features three swappable heads to allow for some different appearances. Considering many of the past Terminator figures were simple head swap variants, this is really like getting three figures in one. Ready for a closer look at Linda Hamilton's portrayal of a victim turned warrior? Then join me after the break... 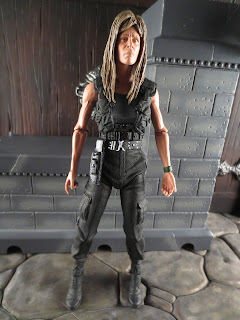 Sculpted by Adrienne Smith and painted by Jon Wardell and Geoffrey Trapp. 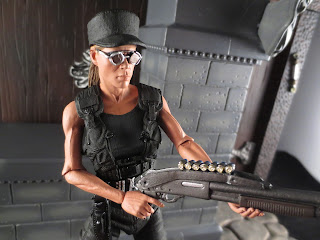 *Sarah Connor excels at shooting stuff, so it's important that her action figure is able to wield a wide variety of weapons. No problem here. She has some excellent articulation that allows her to realistically hold her included arsenal of firearms. Oh, and she's pretty buff, too. In T2, Linda Hamilton totally shows off that Sarah Connor keeps herself fit to fight off anyone who gets in her way. NECA did an excellent job at capturing that on this figure. 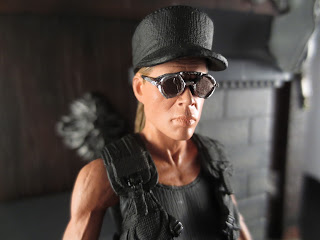 * This is probably the most iconic headsculpt of for Sarah of the three included with his figure (I actually would have preferred the glasses on but no hat) and it looks awesome. The glasses obscure Sarah Connor's eyes so much that she seemingly becomes a killer with a mission, much like the Terminators themselves. Sarah absolutely belongs on a shelf of action heroes and this is the primary headsculpt I'm going with. 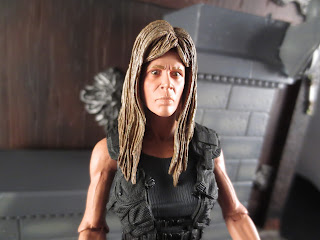 * And here's the second head. This is a very world weary depiction of Sarah Connor. It reminds me more of what she looked like when John and the T-800 broke her out of the psych hospital. The sculpt is good and the hair looks accurate, although it might be sitting too high up on the head. These heads swap easily, though, which is a real plus. 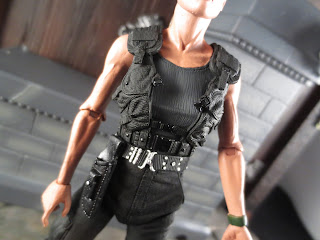 * Even if you don't care about Terminator 2: Judgment Day, surely you can find a use for a tough woman in your collection clad in black tactical gear. The vest Sarah's wearing is loaded with little pouches and stuff while her shirt has a nice ribbed texture. 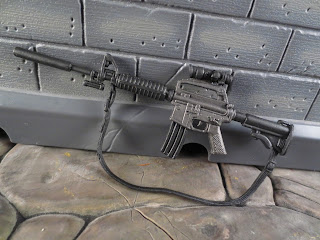 * Like in the film, NECA's Sarah Connor has access to a stockpile of weapons. First is the modified Colt Commando which she takes with her when she attempts to assassinate Miles Dyson. It's an awesome sculpt and features a laser sight on the bottom and a scope on top. There's also a sling so Sarah can wear this across her chest or shoulder if she's busy carrying other weapons. 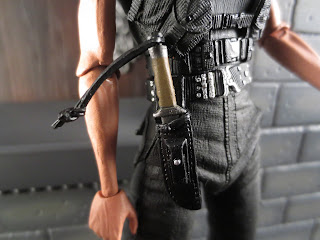 *  Sarah has a sheathe attached to her pistol belt that holds her knife. Considering all of the Rambo and Dutch figures NECA has released they're definitely experts on knife sheathes right now. I love the realism of the stitches along the edges and the pouch for a sharpening stone. 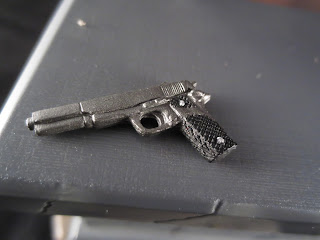 * Sarah's personal sidearm is a Detonics custom 1911. Compare this accessory to an image of the weapon used in the film and I think you'll be impressed. This is not just your run of the mill pistol and NECA, showing their usual attention to detail, made sure to accurately reflect that. Sarah looks awesome holding this bad boy. 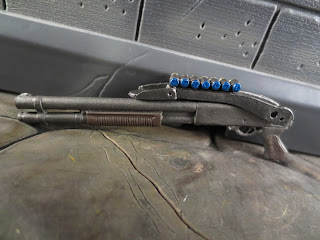 * Last, but certainly not least, Sarah comes with an amazingly cool Remington 870  Police Combat model shotgun with a folding stock and a shell holder. This is an incredibly cool looking accessory and I love that the stock actually folks back. Need something to deliver a few blows to the T-1000? This is it. 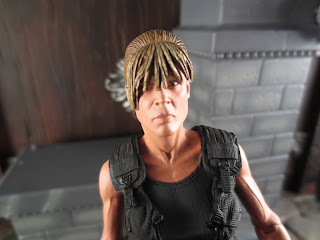 
*This is the third headsculpt for Sarah and while I like the sculpt and the ponytail, I feel like the bangs sit far too low. They're a separate piece glued on so maybe mine just got glued on too low. The bangs kind of obscure her eyes, which is not something I remember Sarah Connor's hair doing. 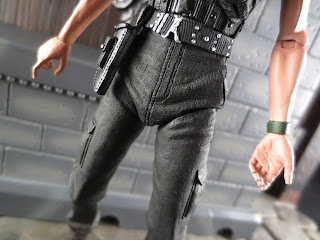 * Sarah's black BDU pants look great and her leg articulation is pretty functional (but not perfect) but what tends to happen here is that the tops of her legs get caught on the crotch of the pants. As you can imagine, that ends up looking really weird. I think NECA's been on the right track with using this style of articulation but it still needs a bit more improvement before they perfect it. 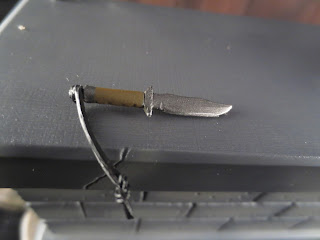 * I mentioned above that Sarah's knife looks awesome in the sheathe on her belt. Unfortunately, that's about all it's good for: The handle is too small to fit in her hands. I can see what NECA was going for the withe string on the handle but it's made from a rubbery plastic and it sticks out at a weird angle. Nice effort but no dice on the effect. 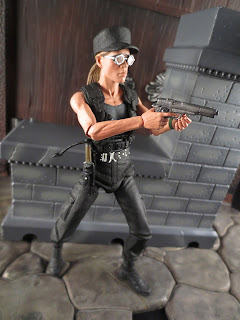 With most of the other Ultimate edition figures NECA has made, they've either had plenty of experience with the character or with the actor. Here, with Sarah Connor, this is NECA's first go at the character. They've done a pretty admirable job. While there are some problematic areas such as the bangs on the air and the way the thighs pull out above the crotch piece, overall this is an amazing effort. I'm absolutely digging the level of detail, particularly on the accessories. Sarah is packing! This is a Great and a 1/2 figure and another fine example of what NECA can do in this scale. Now, let's work on getting some more characters out, huh NECA? Maybe someone from Terminator 3 and a T2 John Connor?

I really haven't reviewed that much Terminator stuff on this site. The only things I've reviewed have been:

I've reviewed a few other of NECA's "Ultimate Reel Toys" figures though, including: