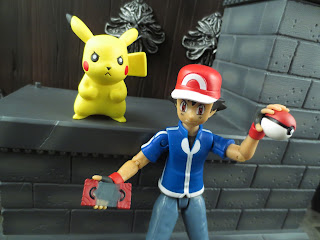 Ash and Pikachu! I choose you! Today I'm reviewing the Ash + Pikachu figure(s) from Tomy's newest series of Pokemon action figures. Now, I'm not much of a Pokemon expert: My knowledge doesn't extend much beyond the original generation of Pokemon, Pokemon Snap, and the theme song lyrics to the cartoon series, but lately me and the little one have been watching through the original cartoon series off and on and I'm definitely enjoying it. It really is a fun show and brings back some good memories for me. I don't think I would have picked this figure up, though, if it weren't for the fact that I've been collecting Jakks Pacific's World of Nintendo line. While Jakks has the rights to pretty much everything in the Nintendo catalog, my understanding is that Pokemon is not included. So, if I want to make a Super Smash Brothers roster on my shelf, I had to pick up an Ash and Pikachu elsewhere, right? Well, I did. Now this isn't the Ash costume I remember, but I'm aware of what's happening around me enough to know that this is Ash from Pokemon X&Y. He's still Ash enough for my purposes, though. Want to know if this figure is a worthwhile addition to your shelf? Then join me after the break... 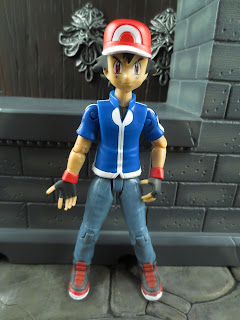 Accessories: Pikachu, Pokedex, and a Pokeball. 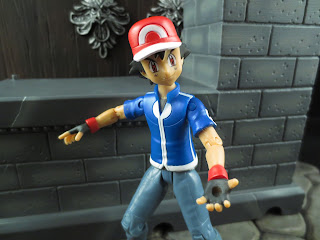 * Ash has some pretty good arm articulation and an excellent ball jointed head. He's also a really sturdy feeling figure, which is nice. When picking something up from a company you're unfamiliar with, there's always a little hesitation about the quality to expect, but Tomy seems to have done some quality work here. 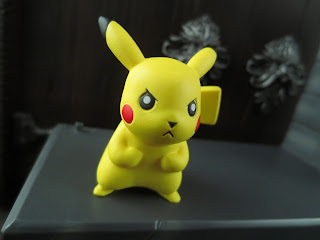 * Since this figure set is technically called "Ash + Pikachu" it certainly makes sense that Pikachu would be included too, right? Since Ask and Pikachu are inseparable, you're darn right that Pikachu is included. And man, does he look pissed or what? Seriously, this is not happy, go-lucky, ketchup eating Pikachu. This is "I'm about to thundershock your face off" Pikachu. The head here looks great and the paintwork is nice and clean, too. I still have some little Pikachu figures in this scale from 1999, so this guy has some siblings to hang out with. 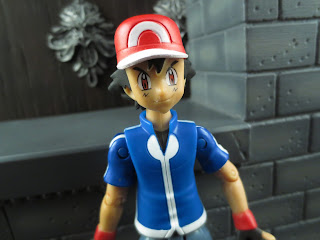 * This is a pretty great looking version of Ash Ketchum. Not only is his hair and face sculpt near perfect but he also has a really fantastic balljointed head, which lets him have some excellent expression in his poses. I'm really digging the work here. I'm not sure I've ever seen any other action figures from Tomy, but it seems like they've made a solid product here. 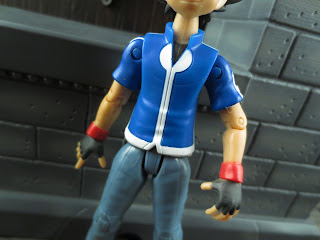 * The paintwork is really nice and clean on Ash, too. There are quite a few different colors on his outfit and shoes and Tomy really pulled this off very well with overall neat and clean lines. 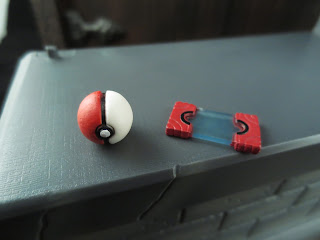 * Besides Pikachu (who is really more of a companion than an accessory), Ash comes with two other extras: A Pokeball and a Pokedex. Those are definitely the two most significant items I think of Ash using and I'm glad they're here. Had they been absent, I honestly think I would have left Ash on the shelf of my local Wal-Mart. That's the power of accessories, folks! 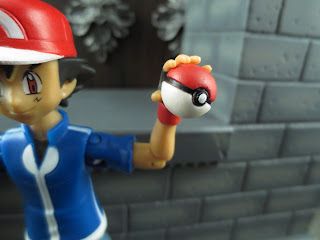 * Since the Pokeball has a little peg on the back it fits nice and snugly into Ash's left hand. I'm really glad they used a feature like this as it's vitally important that Ash is able to interact with the Pokeball. He looks pretty cool holding it up like this. 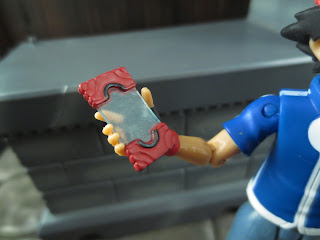 * And here's the Pokedex. It's the latest model and has a cool translucent blue screen. There's some really cool little details on it and Ash can easily hold this thing in his right hand pretty well. Remember when having something like a Pokedex seemed like pure fantasy? 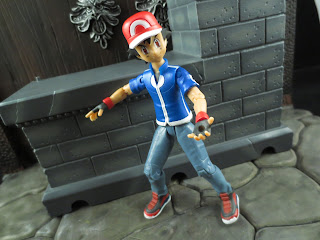 * Ash kind of has ball jointed legs, but they're really, really limited in movement. Honestly, I could completely forgive the lack of any ankle movement if the hips were better, but they're not. You can still stand Ash in a few different ways but he's not going to be making any dynamic Pokeball throwing or victory stances. 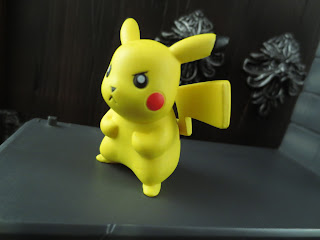 * Pikachu is always cute, but this guy seems a little flat in a few places. I'm not sure how to describe it but his body just doesn't look quite right to me. What do you think? 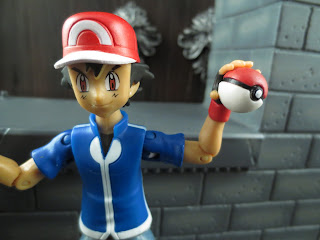 * I applauded Ash's arm articulation above, but I guess I jumped the gun a bit. I do wish he had swivel/hinge or ball joined wrist joints. As it stands, he can't really hold the Pokeball out straight in front of him. Swivel/hinge joints would have been amazing on this guy. It's still not terrible the way it is, but those hinged would have been welcomed with open arms. 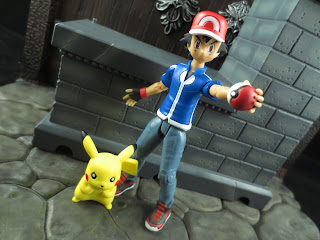 I have to admit that this is a pretty nice figure. I'm not sure I'd pick up any other figures from this line simply because I'm not that into modern Pokemon (although I could see grabbing Misty, Brock, Team Rocket, Nurse Joy, or Officer Jenny, if any of those folks are still around). The quality is definitely here, though, and I doubt you'd find many figures this nice for the $12-$13 price tag at retail. There are some smaller issues here and there but overall I'm pretty pleased. Ash is a Great figure and definitely makes a nice addition to any Pokemon or World of Nintendo collection. He might be a tad on the tall side but I'm not sure that matters considering the cartoonish, exaggerated proportions of the Nintendo cast.

This is actually the only Pokemon figure I've reviewed on here. In fact, I'm not sure I've bought anything Pokemon since around 1999 or 2000 other than a videogame here or there.
Posted by Barbecue17 at 2/22/2016