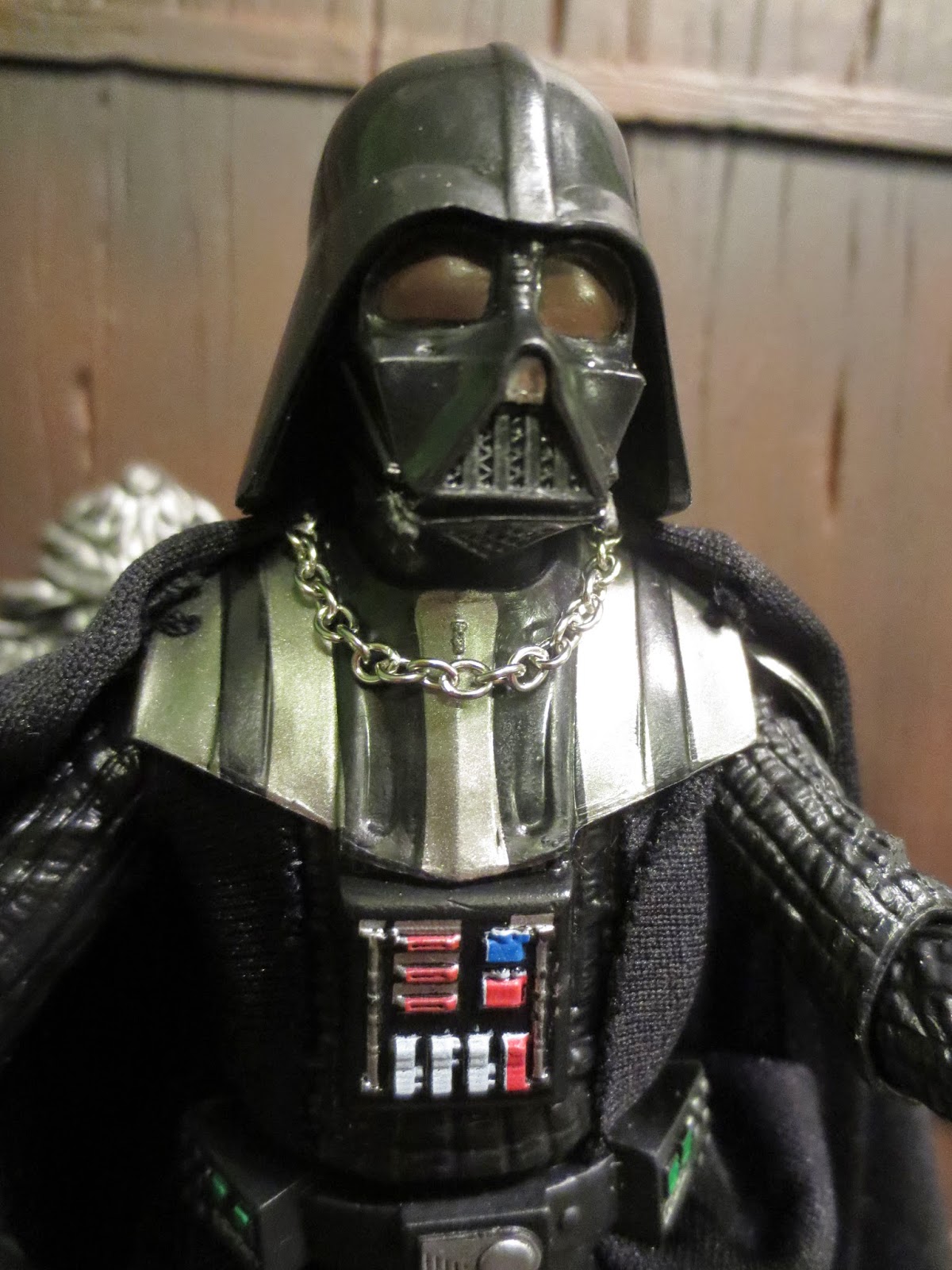 If there was one figure in Star Wars: The Black Series that should have been done to perfection, it was Darth Vader. While Boba Fett was the figure in The Black Series I was most looking forward to (my second most wanted is Admiral Ackbar), Vader is probably the most significant character for the line. In all honesty, I expected nothing short of perfection. While Vader has four distinct film costumes (there are some subtle differences between his appearance in each of the three original trilogy films as well as the brief appearance in Revenge of the Sith) the differences are fairly minor and I expected that Hasbro could largely create a perfect base body while changing elements such as the head, belt, and chest panel for each release (because you know Hasbro will want to crank out Vaders). Interestingly, while I speculated that Hasbro would start with the A New Hope armor, Hasbro instead based this first release of Vader on his Return of the Jedi appearance. So, how did Darth Vader turn out? Well, join me after the break... 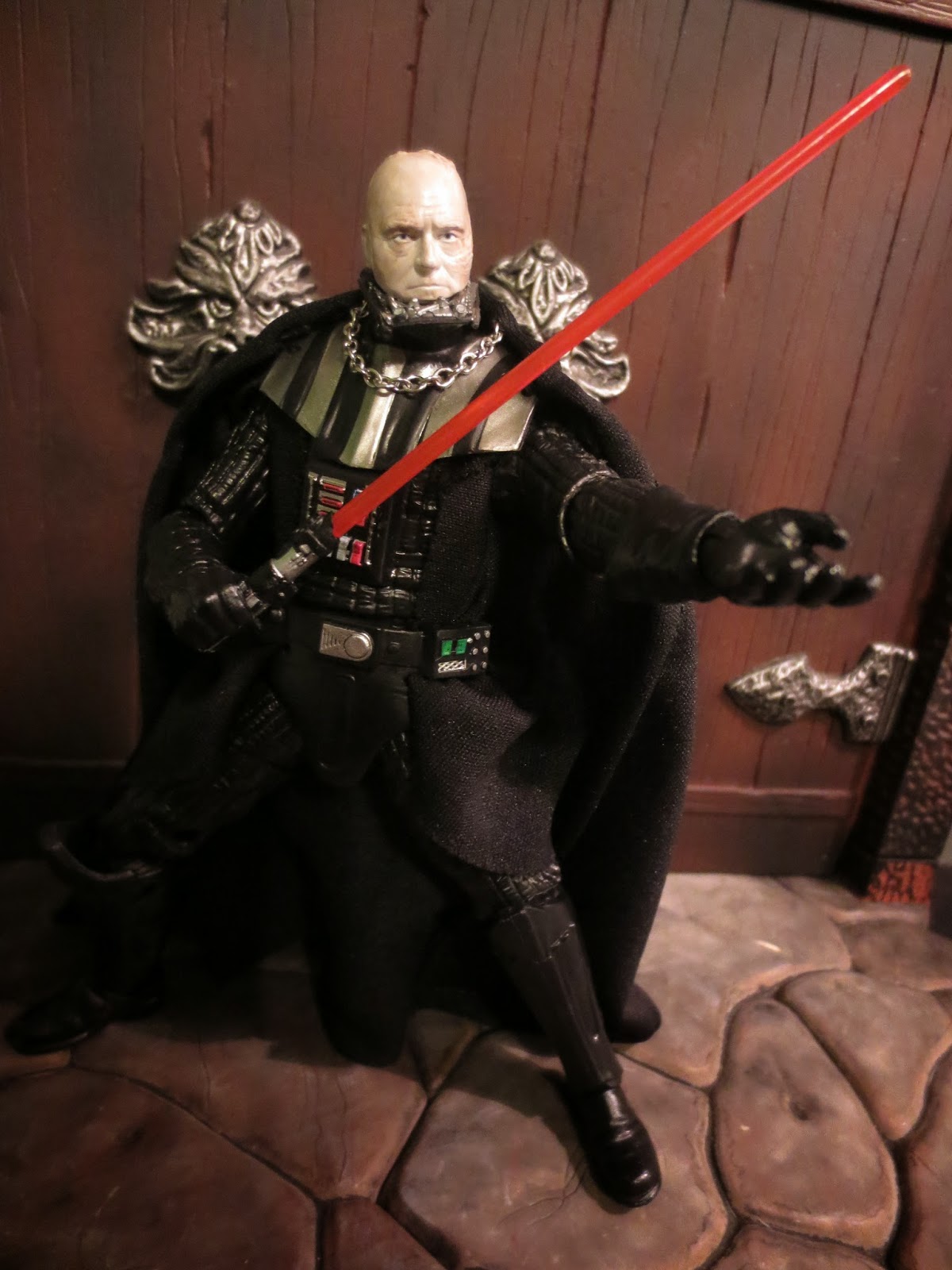 The Facts:
Height: 6 3/4 inches tall from his boots to the top of his dome. 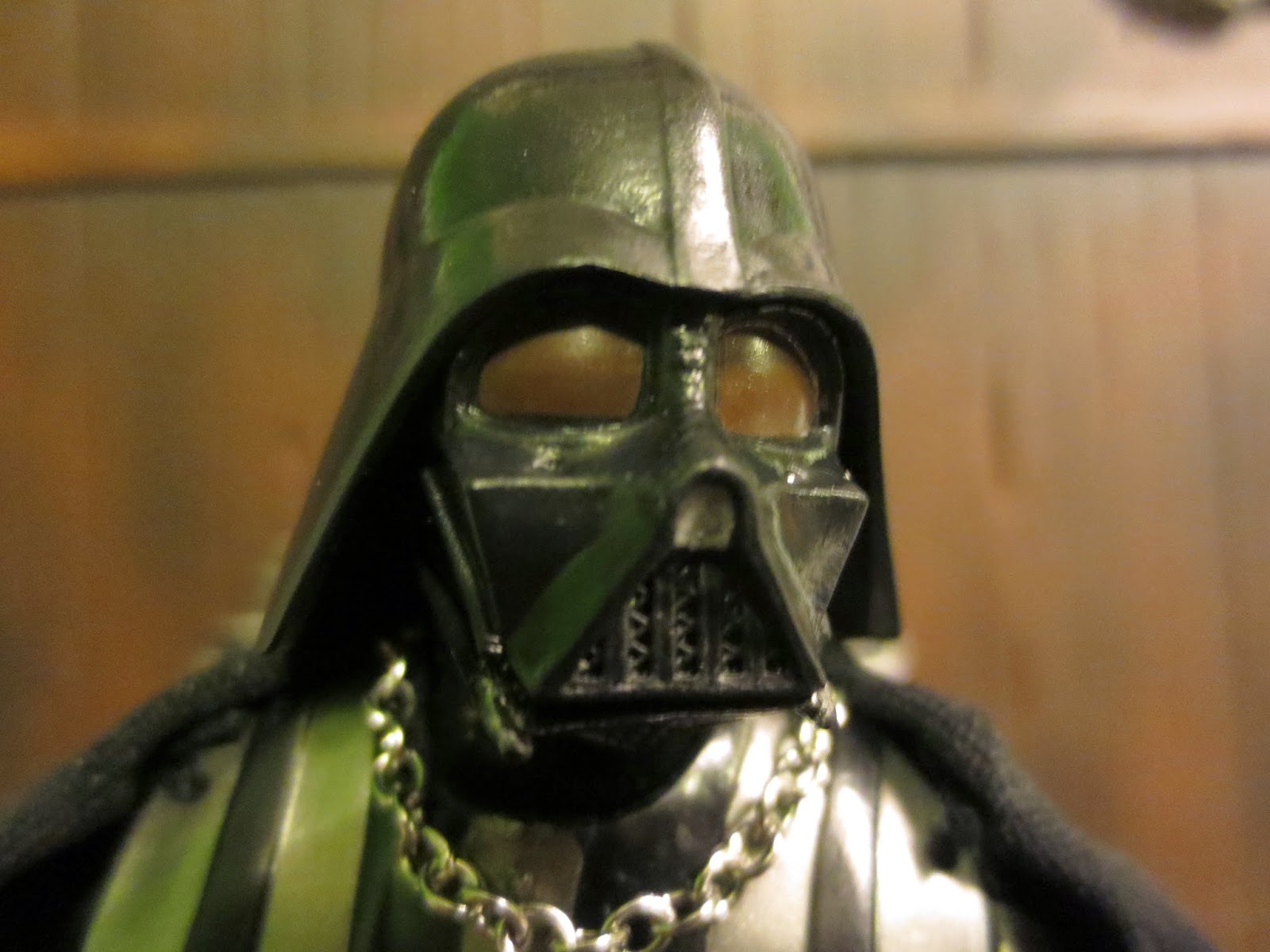 To help me out in reviewing this Vader figure, I'm going to be looking at this figure against the 501st Legions costume reference library images and descriptions of Vader's Return of the Jedi costume. Feel free to pull that site up in another tab for reference, if you'd like. The 501st, besides being awesome, charitable fans, are truly the experts on catching all of the minute costume details that the average fan just passes over!

The Dome: Yes, we'll be dissecting Lord Vader in great detail, first looking at the dome that sits on his head and covers the face mask. I think the head is the most problematic part of this figure as while there is no doubt that this is Darth Vader, the entire helmet just looks a bit wonky to me. Looking at the removable dome itself, I just don't thing the edges flares out enough. The top of the dome also sits a bit too high. Maybe this is to accommodate the fact that this is a removable piece, but I'm just not seeing the ROTJ dome here. The glossiness and ridges do look good, though, and the detailing in the top interior of the dome is a neat touch. 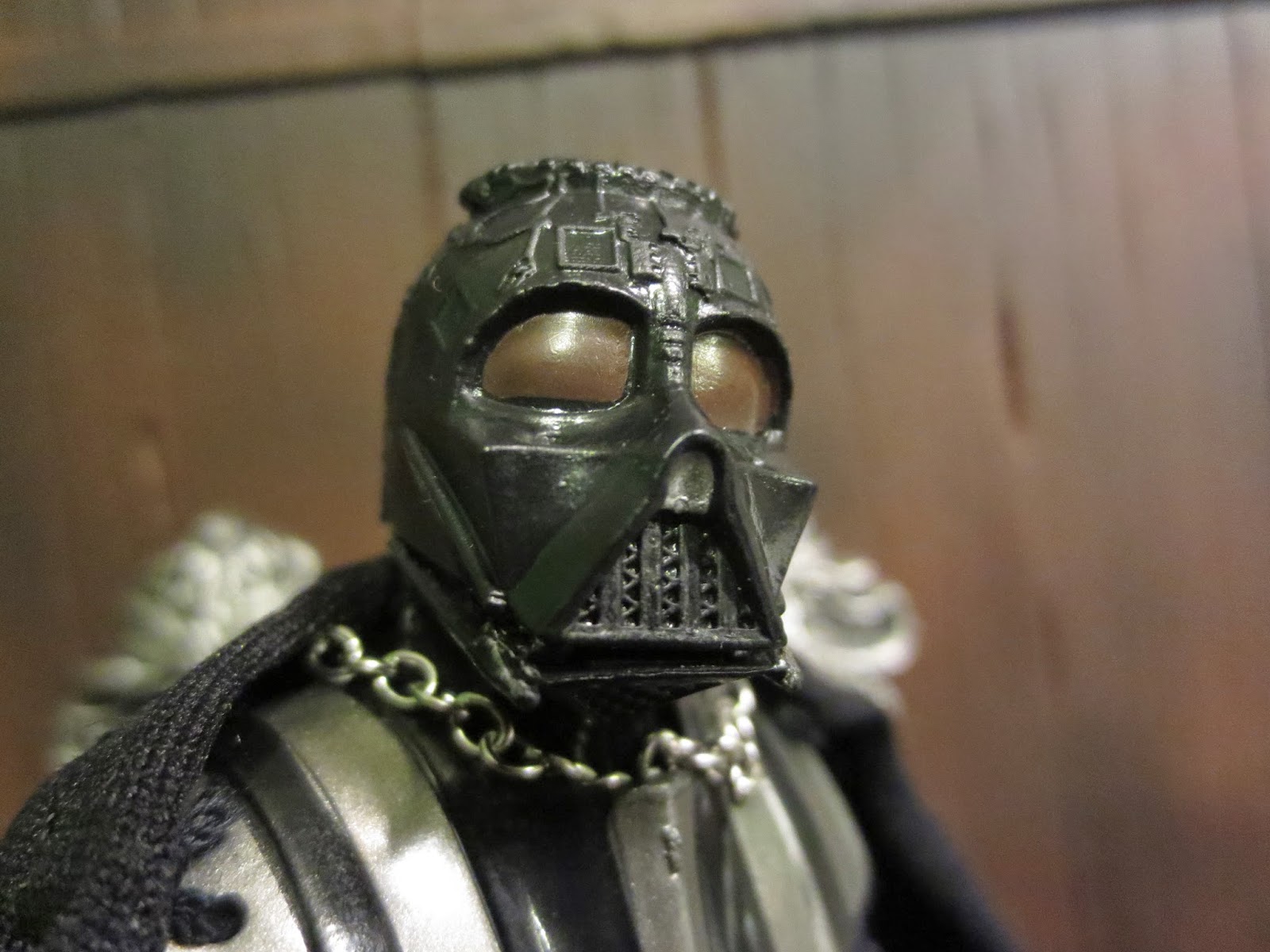 The Face Mask: Right off the bat you can see that the face mask just doesn't sit flush with the neck piece. Again, this is because of the removable helmet feature. The detail on the upper portions is a nice touch but overall the "cheeks" just don't seem angular enough nor are the eyes quite right. The amber lenses look good, though. 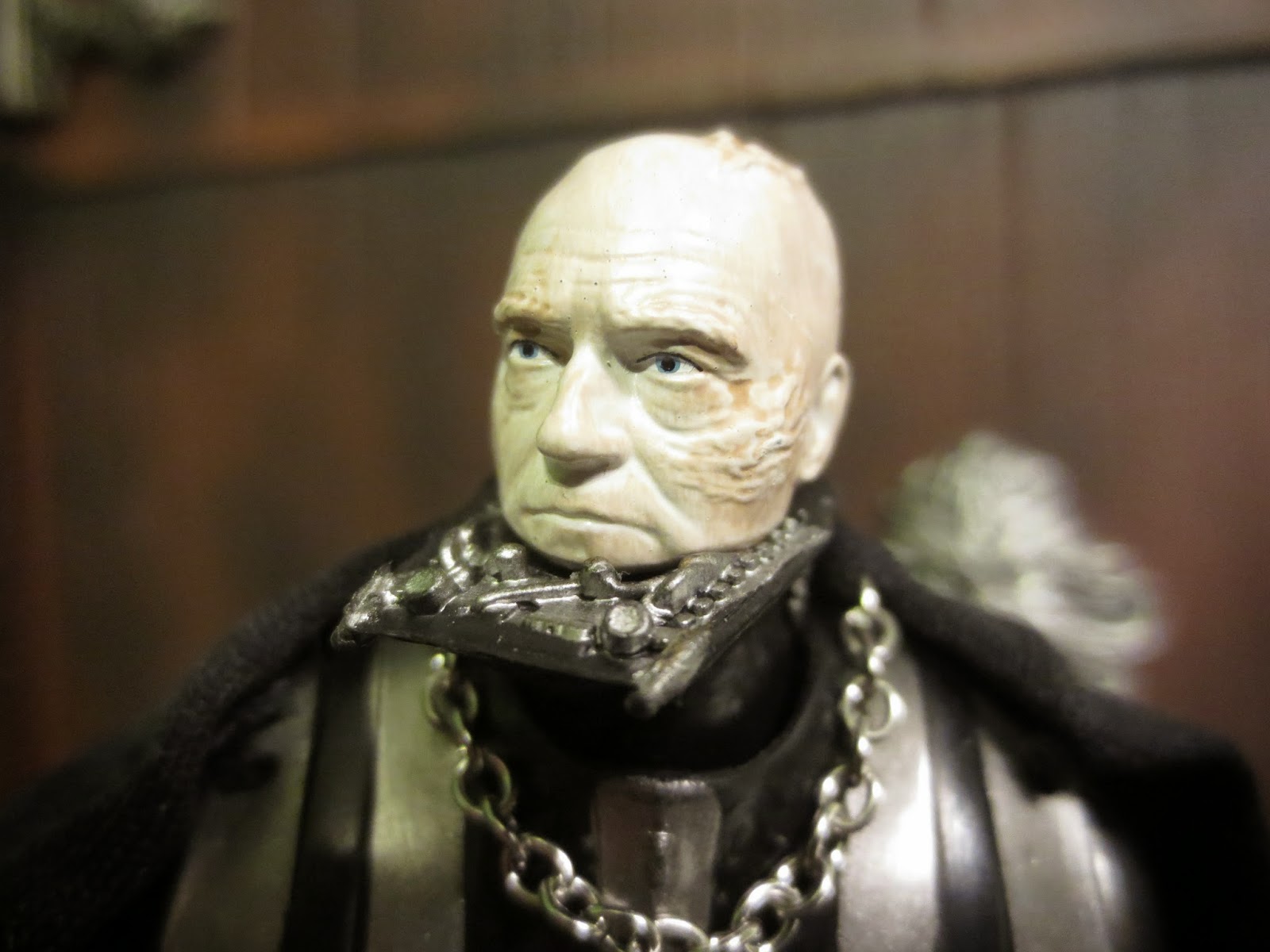 Anakin's Head: While I'll absolutely admit that the removable helmet feature has hindered the accuracy of the helmet sculpt, I love the Sebastian Shaw as Anakin Skywalker portrait underneath. His pasty skin is captured quite nicely and features all of the nasty scars we see in the film. He's a bit expressionless, but that's OK. 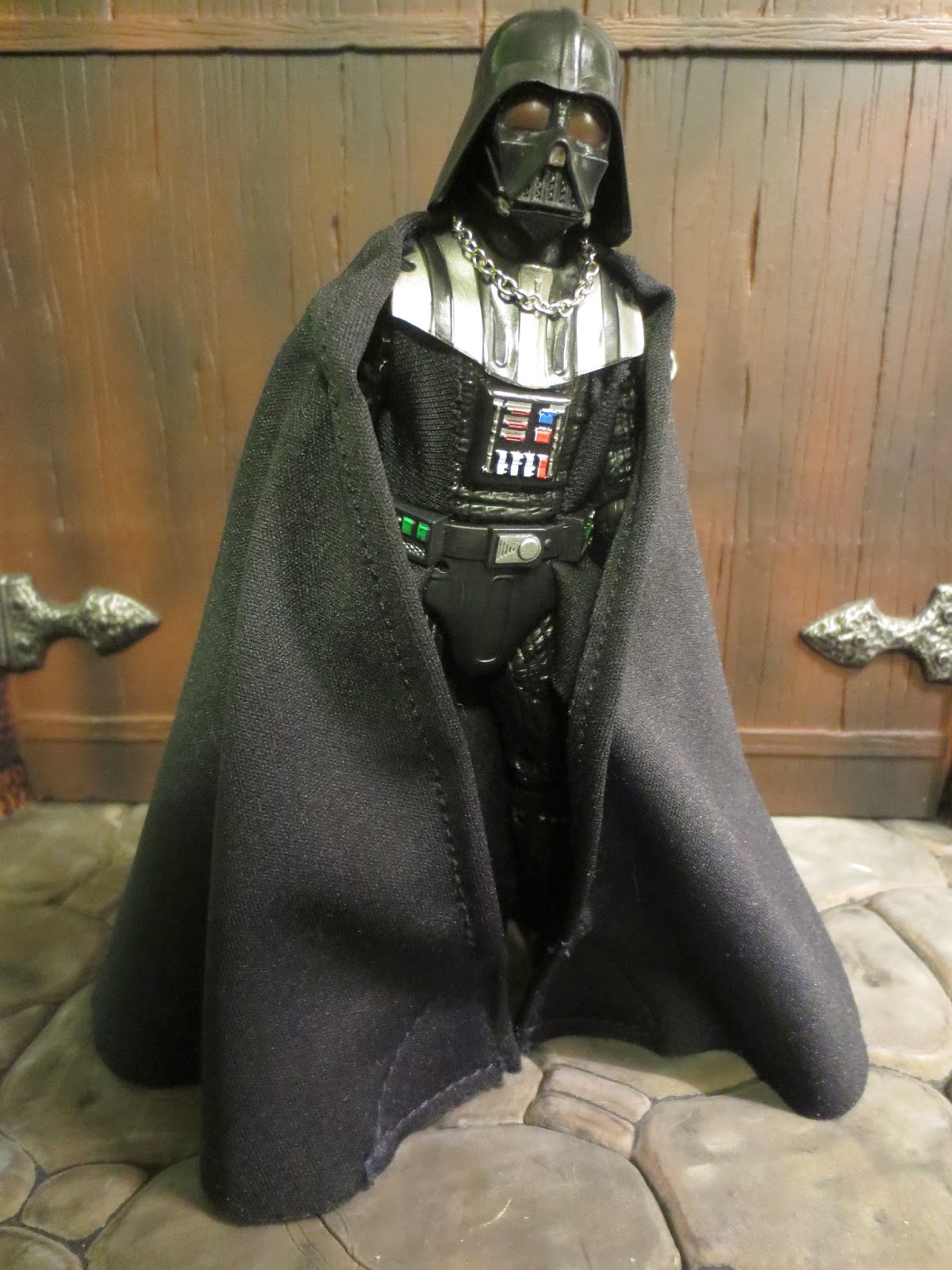 The Cape: The cape looks great and is a nice use of soft goods to give the figure a dynamic appearance. It's permanently attached to the chest armor but does feature a very nice actual metal chain to help keep it in place. While the chain isn't entirely screen accurate (there should be fewer, but larger, links) it is one of the nicest looking Vader cape chains we've seen on an action figure. I'll also mention that the cape has some heavier squares of fabric sewn into the interior corners to help keep it nicely weighed down. 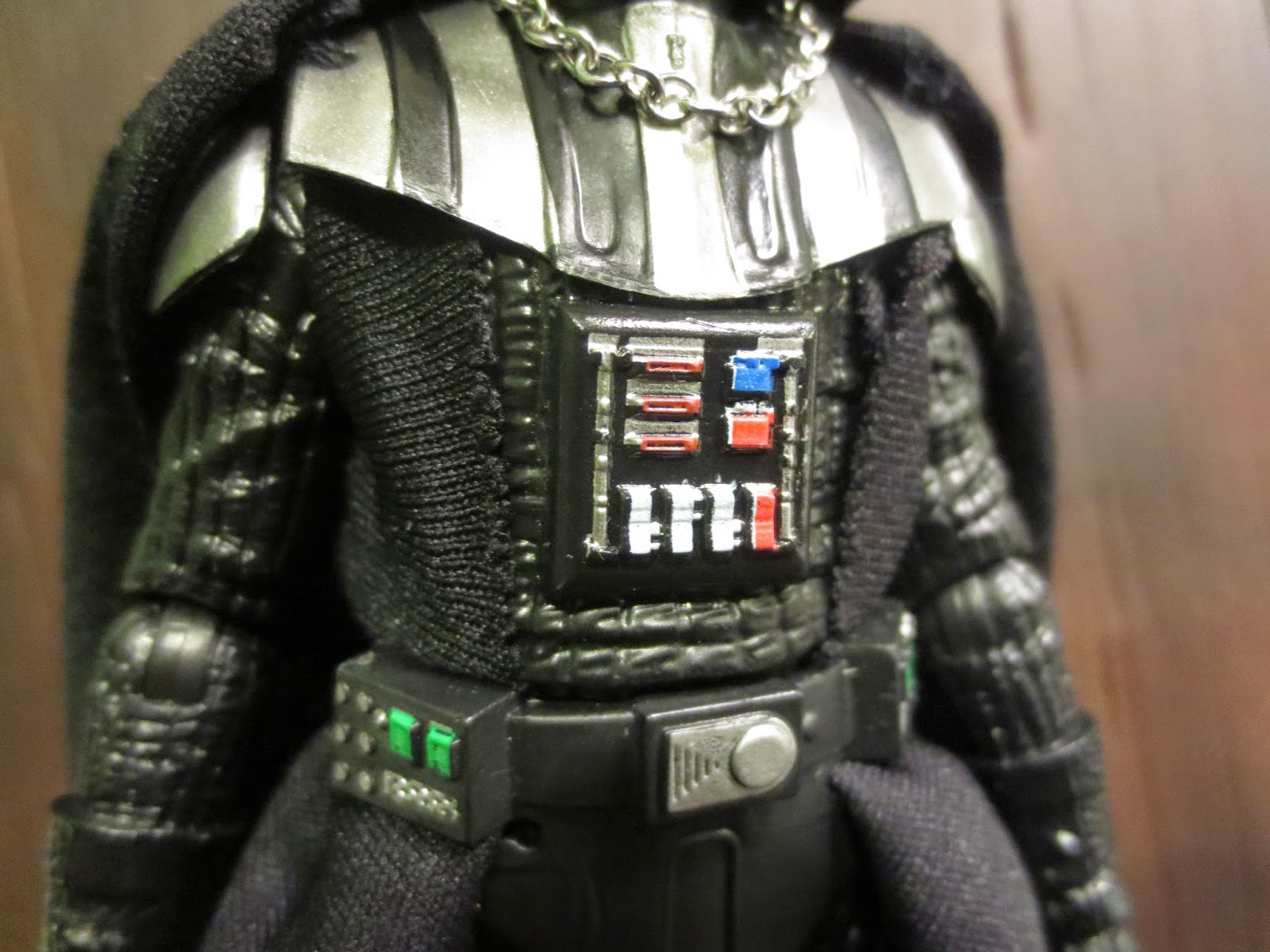 The Chest Armor: Here's an area where accuracy had to take a hit for functionality. You see, Vader's chest armor is one solid piece, but that would hamper the shoulder articulation on an action figure. Hasbro has elected to give Vader shoulder pads (which are mostly hidden under the armor).I think it's a decent solution. The armor does look like it hangs down a bit too low, however, and the black and gunmetal alternating stripes are a bit messy in places.

The Inner Robe: Vader's inner robe is also a soft goods piece that runs from his shoulders down past his waist. It's held in place by his chest armor, belt, and codpiece, and it looks OK. The codpiece has some slits cut in it that help keep the robe where it needs to be. The more you play around with it and tweak it, the happier you'll be.

The Chestbox: Vader's chestbox might be the easiest way to identify the different Vader costumes and fortunately Hasbro nailed it. It features all of the little gizmos and looks pretty good. The paint is fairly clean for such a small piece. I really like that you can even see the straps that hold this onto Vader's torso. Nice work with lots of sculpted detail here. 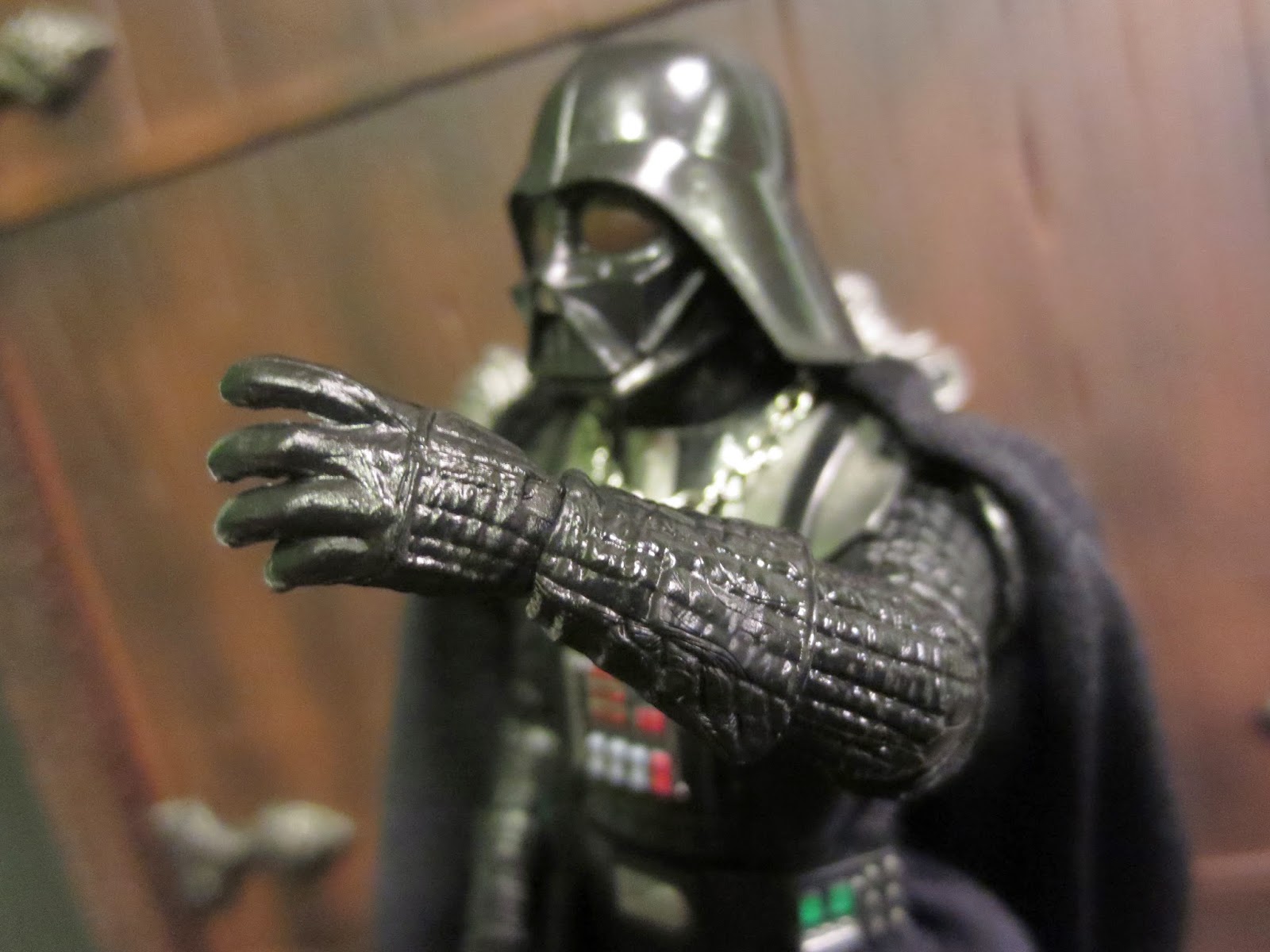 The Bodysuit: The bodysuit covers all of Vader and is nicely sculpted. Hasbro really captured the quilted texture of the material while also showing off Vader's massive size (not POTF2 massive, though).

The Gloves: They're sculpted with the same quilted texture of the bodysuit and work just fine. The right hand has a solid grip for the lightsaber while the left hand is in a gesturing motion. Perhaps a Force push or a Force choke is imminent? 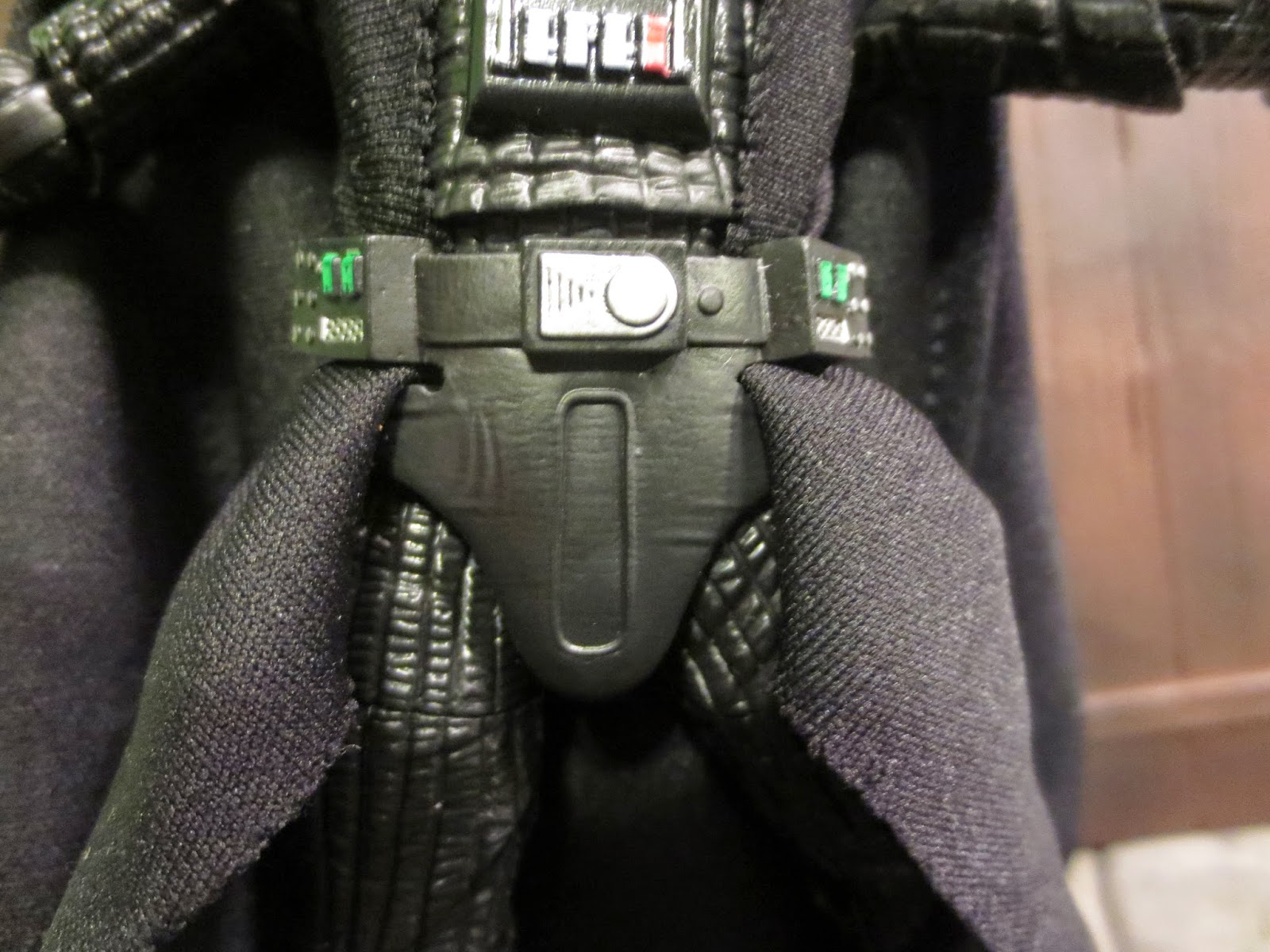 The Belt: Overall, the belt is quite nicely done. It looks good and all the little gizmos are in the right places but there are a few details that aren't quite the right colors (the smallest silver dot on the belt boxes should be red). I know this sounds picky and I'm not really holding this against Hasbro as a major faux pas or anything, I'm really just pointing out the level of accuracy present. Believe me, if Hasbro hadn't done their homework, we couldn't or wouldn't even be having this discussion. The biggest miss here, though, is that there is no lightsaber hook present. None. I guess I'd be OK if Hasbro had decided that the included lightsaber couldn't really fasten securely on the belt, but to leave it off entirely? Surely they could have thought of something. A simple extra "attachable" lightsaber hilt? Considering we've seen lightsabers on belts in the 1/18th line since at least The Phantom Menace, I think this is a big miss. 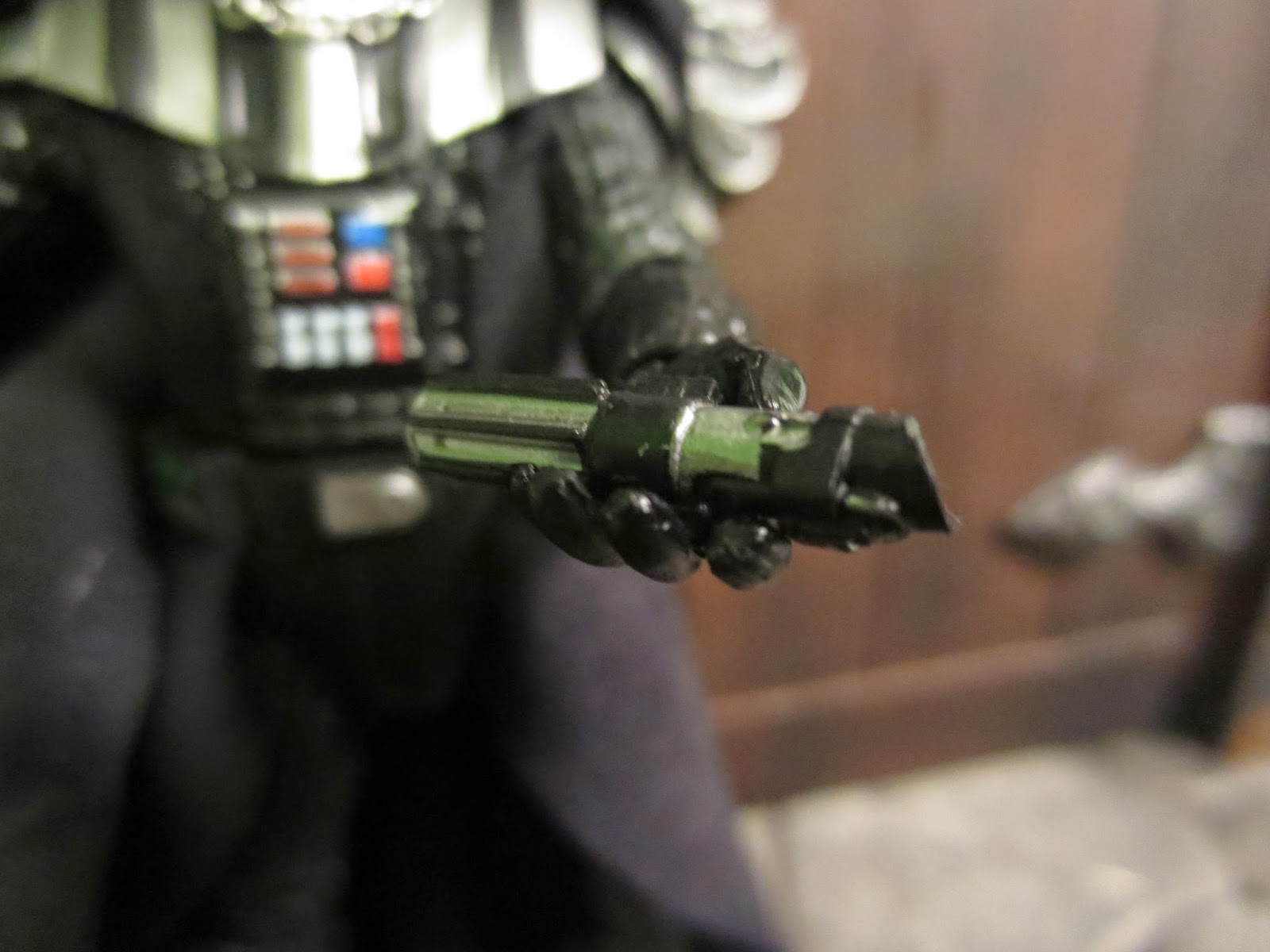 The Lightsaber: This surpasses the saber of any 1/18th figures that Hasbro has released as it features an excellent amount of detail. Even the small connecting wires are accounted for. They're touch to see and not painted, but they're present. The blade easily and securely attaches from the hilt. Once again, while I wish there was a way to attach this to Vader's belt, it is by no means a bad accessory. 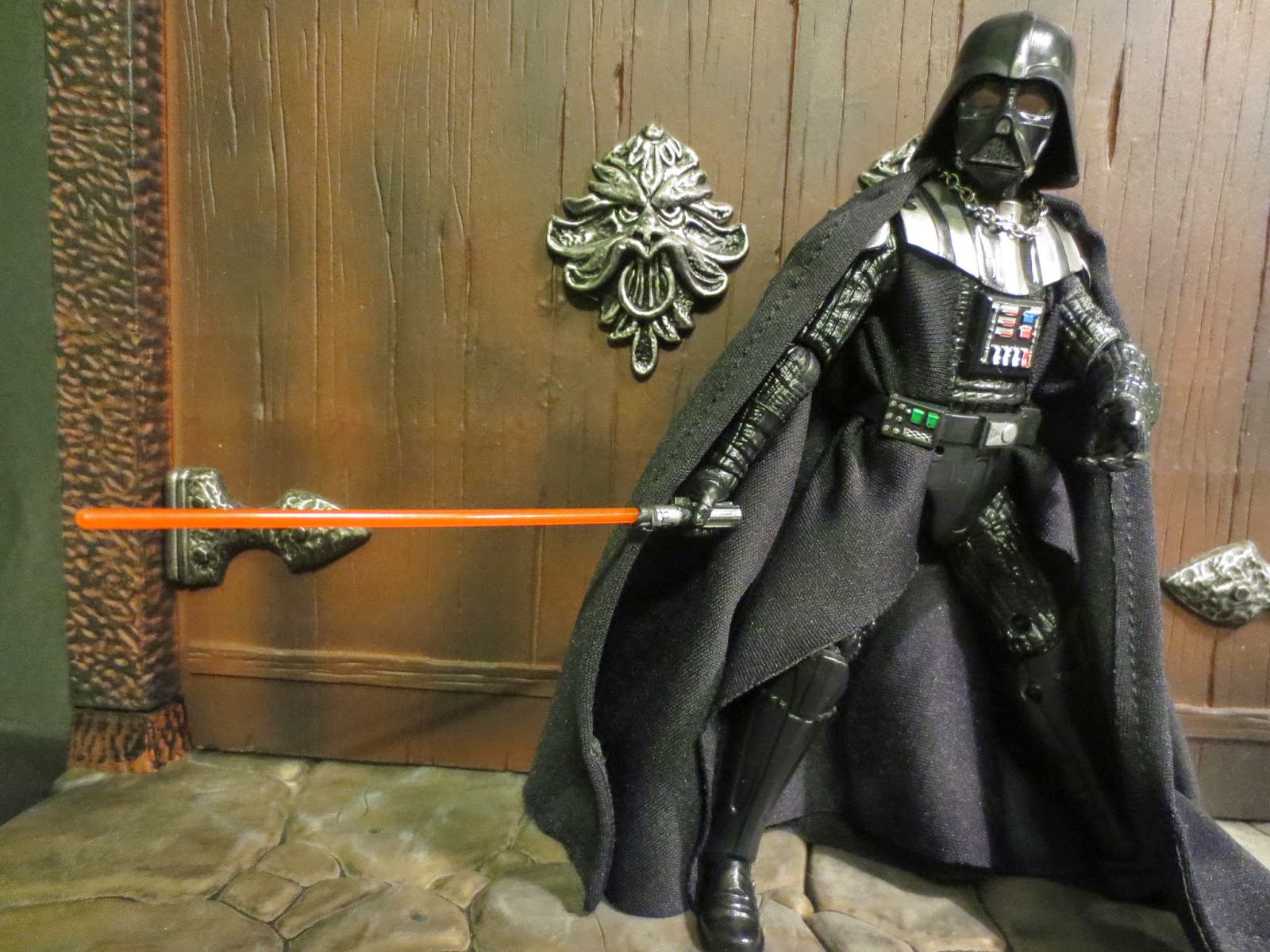 The Codpiece: Yup, we're talking about Vader's codpiece. It looks pretty spot on to me. Honestly, I'm a little afraid to Google "Darth Vader's Codpiece" so I'm just going to simply look at a film still and observe that yes, this is indeed Vader's codpiece. Oddly, the codpiece has slits cut in it which hold the inner robe in place. It's not perfect, but it works.

The Shin Guards and Boots: The sculpt on Vader's footwear is also quite accurate although I wonder if the shin guards themselves shouldn't be just a bit glossier. I do like how you can see the straps that keep the shin guards attached over the boots, though. 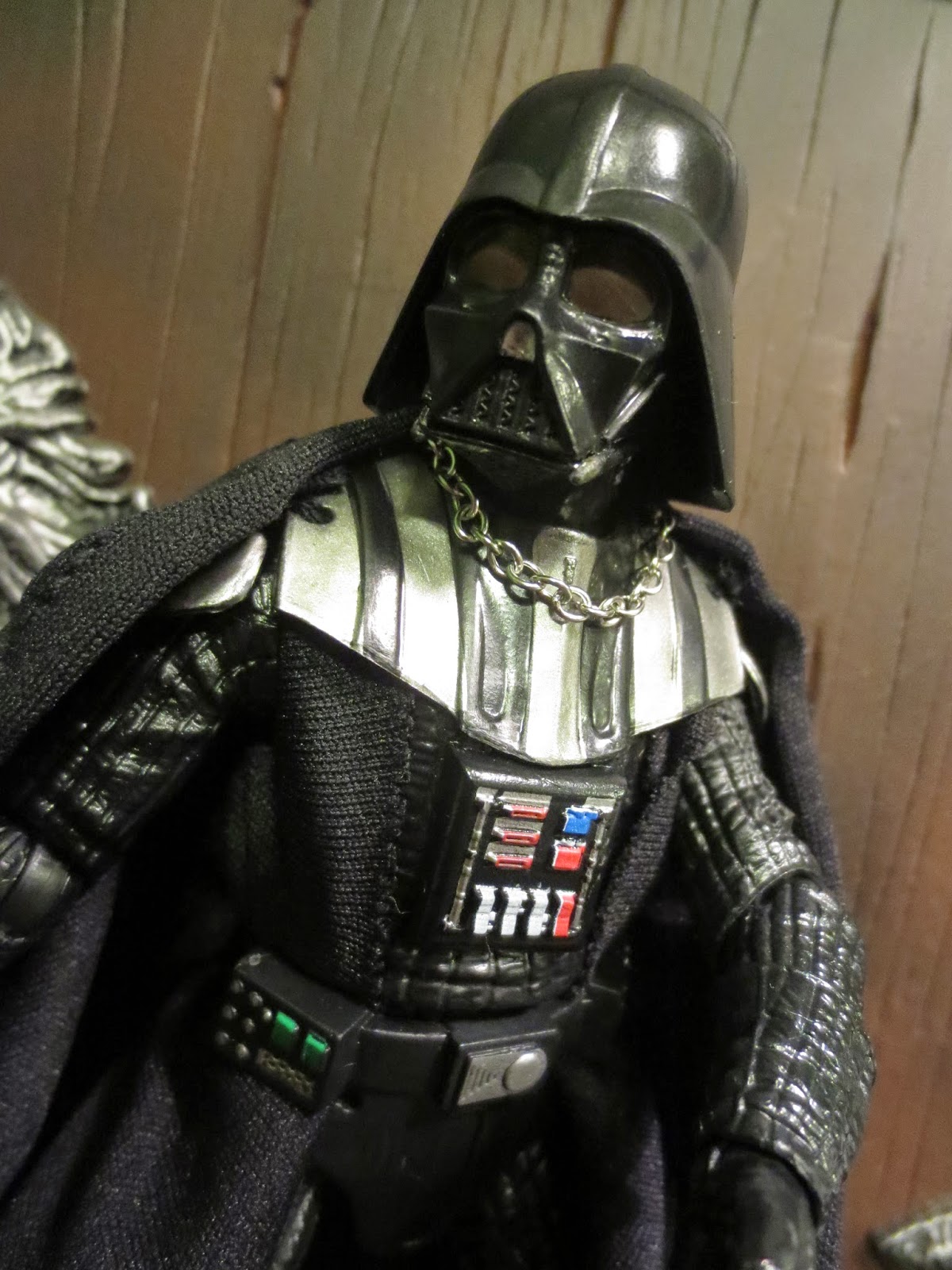 Overall I think Hasbro did a fairly good job of translating Vader into The Black Series, but the few areas that are off really just bother me. I think the shape of the helmet and the fact that the face mask doesn't sit flush against the neck collar really hampers the appearance of the figure. There's so much good work on this figure that it is truly a shame the head sculpt wasn't perfect. In all honesty, Hasbro probably should have went for a swappable alternate head or just attempted an A New Hope or The Empire Strikes Back Vader first. Hopefully they'll figure out a place for Vader to stow his lightsaber, too. The figure is nicely in scale with other characters and has a great range of articulation and feels pretty solid and durable everywhere except his knee joints, which seem a bit floppy. As a toy he really excels, though, as does most of The Black Series. Looking at Vader, I'm really torn by what I like and what I dislike. Overall, I think I'm going with a Good and a 1/2. He's not at all a bad figure, but I truly don't believe he's the best Darth Vader Hasbro can make. I totally get that I'm being critical, but only because Vader might just be the most iconic Star Wars character and Hasbro has a lot of experience in cranking out toys with his likeness. Hopefully an Empire Strikes Back Vader (perhaps with an alternate "Luke as Vader" head) or an A New Hope Vader (with an Interrogation Droid) will build on the good work here to give us something truly great. 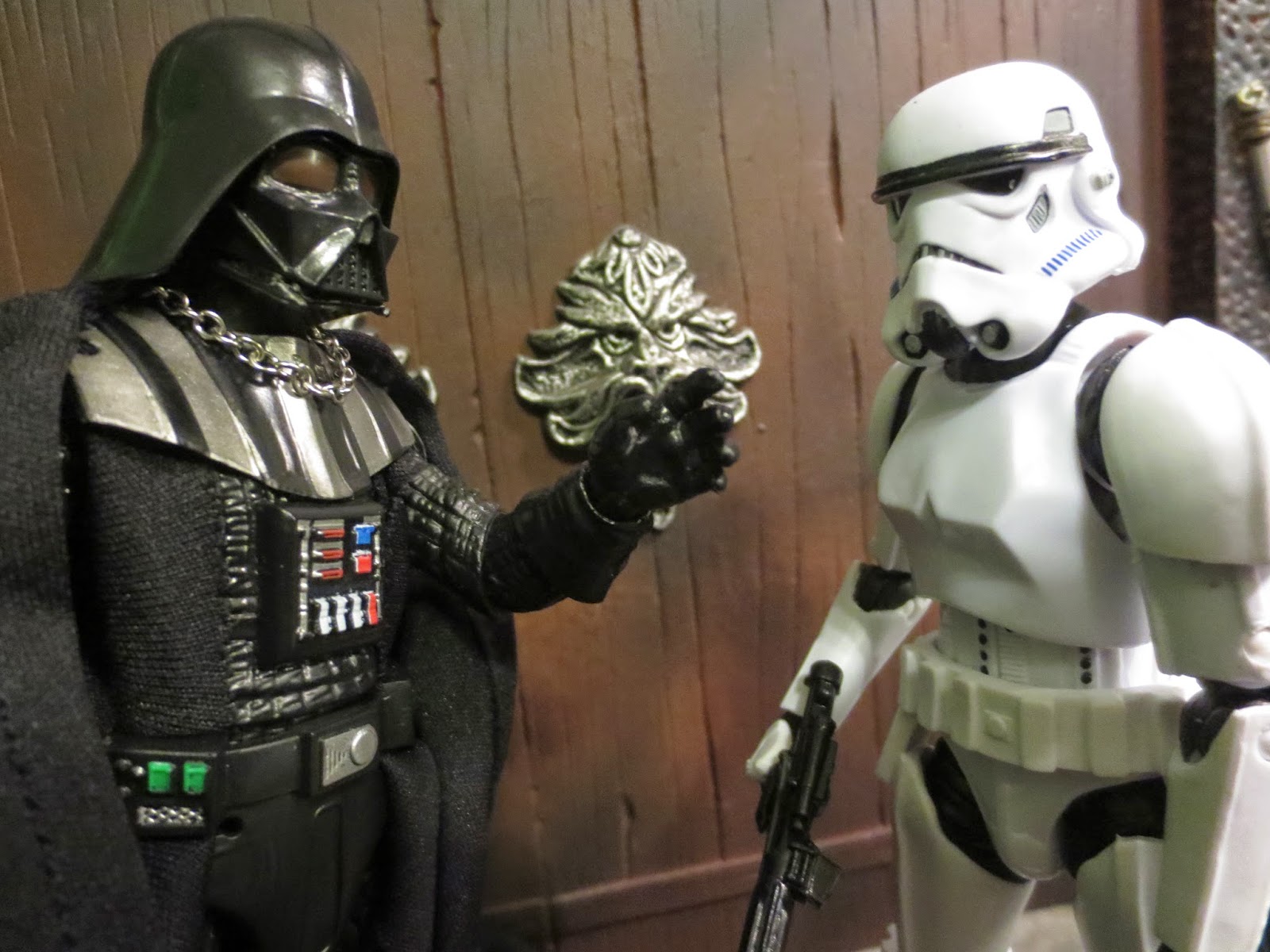